Drug & Alcohol Deaths on the Rise Among Older Americans 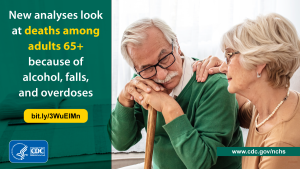 Drug and alcohol abuse have impacted seniors in the United States as it has among younger Americans. Over 5,000 people ages 65 and over in the U.S. died of a drug overdose in 2020, and more than twice that many (11,616) died of alcohol-induced causes. The data are featured in two new reports released today by CDC’s National Center for Health Statistics (NCHS).

NCHS also is releasing another report today focusing on the 65-and-over population: “Unintentional Fall Deaths Among Adults Aged 65 and Over: United States, 2020.” The new report shows death rates from unintentional falls has increased between 2000 and 2020 for this older age group.

The three reports are available on the CDC/NCHS web site at: www.cdc.gov/nchs