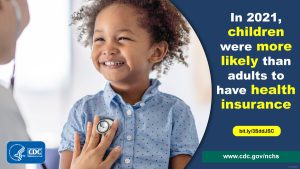 Nearly 25 million working age adults in the United States (ages 18-64) were without health insurance in 2021, according to new data from CDC’s National Center for Health Statistics. Texas, Georgia, and North Carolina had the highest rates of uninsured among this group.

Some of the findings from the demographic report include:

Highlights from the geographic report include:

The two reports are available at the following links: