The Bruceton Research Center in Pittsburgh, Pennsylvania, has a long and storied history going back more than a century. Today, two NIOSH divisions conduct extensive research in this location – the NIOSH National Personal Protective Technology Laboratory (NPPTL) and the NIOSH Pittsburgh Mining Research Division (PMRD). This site is also home to an office of the Department of Labor’s Mine Safety and Health Administration (MSHA) and the Department of Energy’s National Energy Technology Laboratory (NETL).

The roots of the Bruceton Research Center stretch back to the Organic Act of 1910, which was passed to improve the safety of mine workers and established the United States Bureau of Mines (USBM). In the years prior to the agency’s founding, a series of horrific mine explosions cost thousands of miners their lives. In 1911, the USBM leased 38 acres of land in Bruceton, Pennsylvania, and constructed an experimental mine that is still used by NIOSH researchers on site today. On October 30, 1911, the Bruceton site’s experimental mine hosted the first public test of a coal dust explosion in air and helped prove that coal dust could explode without the presence of methane gas. About 1,200 spectators came out to see the demonstration and tour the new facility.

During the early days of the USBM, the agency promoted several innovative technologies, including new developments in respiratory protection. They laid out some of the earliest federal guidance for respiratory equipment and started a respirator certification program. On January 15, 1920, the USBM certified its first respirator, the Gibbs breathing apparatus. This first respirator approval laid the foundation for the future work of NPPTL at the Bruceton Research Center. It was followed by the first particulate filtering respirator approval in 1934 and chemical cartridge respirator approval in 1944. Despite the lack of formal requirements to have these devices in the workplace, manufacturers voluntary submitted their products for approval. After World War I, the USBM took a step further and developed standards and testing methods.

In 1970, Congress passed the Occupational Safety and Health Act, which created both NIOSH and the Occupational Safety and Health Administration (OSHA). NIOSH was tasked with conducting research and training in worker health and safety, which it used to provide recommendations to OSHA and MSHA. The year 1972 saw respirator testing and approval functions move to a NIOSH laboratory in Morgantown, West Virginia.

Even with much of the respirator testing moving to West Virginia, respirator research and guidance development continued at the Bruceton Research Center. In 1981, regulations went into effect stating mine operators were required to provide self-contained self-rescuers (SCSRs) for each miner. And following the Wilberg fire, hands-on training on how to properly put on SCSRs was also required. USBM training research led to the 3 & 3 procedure for putting on a SCSR, which helped guide workers through the process of putting on a breathing unit properly.

In 1994, the CDC updated existing tuberculosis guidance. These new guidelines highlighted the importance of personal protective equipment (PPE) for healthcare workers, specifically the proper use of respiratory protection. Aspects such as putting on, taking off, and the fit of the respirator were key components, in addition to the need for a well-maintained respiratory protection program. One year later, as respiratory protection became mandatory, OSHA revised its regulations for fit testing. Following the newly introduced regulations, further research was conducted on workplace exposure, leading to new methods of experimentation. 42 CFR 84, a new certification regulation, was introduced in 1995. This new regulation replaced the existing 30 CFR 11 and introduced a new approval concept. The updated requirements and tests are still used today in the NPPTL-approval process.

From 1995 to 1997, with a series of Congressional maneuvers, the USBM began transitioning to become a function of NIOSH, as mining research most closely aligned with the goals of improving miner workers’ safety and health. The organization remains a research program within the larger NIOSH organization.

In 1999, NIOSH developed a 32-foot-long trailer with a built-in four-person sound booth used for hearing tests and hearing protection evaluations. This trailer, which is still in use today, is highly mobile and can be deployed to different mining sites around the country, as well as industry conferences, to highlight the importance of hearing protection.

Respirator testing and approval returned to the Bruceton Research Center with the creation of NPPTL in 2001, almost 30 years after such research had moved to West Virginia. That same year, respiratory protection changed dramatically. Like the rest of the nation, NPPTL leapt to the call after the terrorist attacks of September 11, 2001. PPE for first responders became a top priority. Shortly after the attacks, NPPTL and several other organizations conducted a collaborative study on the effectiveness of PPE for first responders involved in the rescue operations and the hazards of the exposures first responders faced. The results from this work showed that there was a lack of respiratory protection during the first week of the rescue operation. This research helped pave the way for the development of guidance for the use of chemical, biological, radiological, and nuclear (CBRN) respirators in 2005.

In response to several mining disasters in 2006, Congress passed the Mine Improvement and New Emergency Response (MINER) Act. This established regulations for mining rescue teams, training, and the sealing of abandoned mine workings. It also mandated post-accident research into communication, tracking, and the use of refuge alternatives. Activities started through this act became the precursor for much of PMRD’s work that continues today at the Bruceton Research Center.

The NIOSH Mining Program celebrated a 100-year milestone in 2010, marking a full century of making a difference in the health, safety, and declining fatality trends of mine workers. Building on its century of research, PMRD has continued to advance the well-being of the industry’s workforce.

Most recently, PMRD research has created products such as:

The emergence of a major Ebola epidemic in 2014 again brought PPE to the foreground. Once more, respiratory protection and other forms of PPE were thrust into the spotlight and with them new guidance and recommendations.

Between 2014 and 2016, the global Ebola epidemic spread to the United States. Ebola is spread by blood or other bodily fluids and is highly contagious, which made PPE integral to the response. To address this need, the CDC recommended PPE Ebola Guidance including NIOSH-approved N95 respirators or powered air purifying respirators (PAPRs) for healthcare workers caring for patients with confirmed Ebola or persons under investigation for Ebola. Beyond testing respiratory protection, NPPTL staff led global PPE recommendations for protection against Ebola, including updates to existing educational resources. To help select appropriate PPE, NPPTL added an Ebola-specific enhancement to the PPE-Info Database.

As part of the NIOSH effort, NPPTL has played another pivotal role during the COVID-19 pandemic, increasing the inventory of respirators across the nation through its quality respiratory protection program and providing valuable PPE guidelines and research. Researchers and engineers conducted studies and evaluations on international and innovative respirator designs, testing their effectiveness and useability. New guidelines were created to help inform workers and supervisors in a variety of industries how to adapt to the rapid, widespread adoption of respiratory protection. For more information about NPPTL’s role during the COVID-19 pandemic, see the NIOSH science blog, NIOSH Efforts to Keep Workers and the Country Safe During the Pandemic.

Over the years, the Bruceton Research Center has gone through multiple changes (see photos below), but NPPTL and PMRD continue to conduct important research at the site. This narrative accounts for some of the more interesting and significant moments in the site’s history, but ongoing research at the site will continue to write the story of better worker health and safety for years to come. 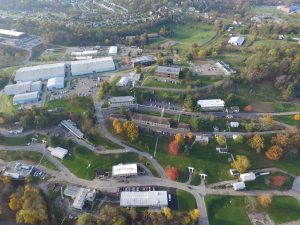 One comment on “Bruceton Research Center – Protecting Workers for 110 Years”

I remember my 8th grade history teacher showing us a newspaper clipping from 1943-1944 and it showed that japan was possibly going to bomb south park ,pa because they helped in making the detonator for the atomic bomb we dropped on hiroshima. Also i think it said something about helping with the manhatten project? Why am i not able to read about it? I cant find anything on it? Weird if you ask me! I grew up on cochrans mill rd and the bureau of mines were literally a few hundred yards from my house.