Taking it to the Streets… and the Mines

Miners are at increased risk for noise-induced hearing loss from the use of high-powered motorized equipment, air-powered tools, and work involving striking, drilling and digging. To protect workers’ hearing, employers must have a hearing conservation program in place which includes engineering controls, administrative controls, and personal protective equipment. Additionally, annual hearing tests are required under the Occupational Safety and Health Administration (OSHA) and Mine Safety and Health Administration (MSHA) 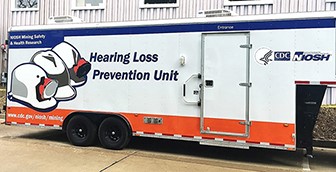 regulations as part of any hearing conservation program. In 1999, the NIOSH Mining Program expanded its research into noise-induced hearing loss by developing a 32-foot long trailer into a mobile laboratory. Using a sound insulated booth, NIOSH personnel can conduct hearing tests and hearing protection evaluations at mine sites. The Mobile Hearing Loss Prevention Unit has traveled to mine sites, conferences, and other community outreach activities since 1999. While the trailer is not currently in use due to the COVID-19 pandemic, we look forward to resuming visits to conferences and other mining events throughout the country to provide hearing tests and other hearing loss prevention guidance.

NIOSH also operates a mobile health screening program called the Enhanced Coal Workers Health Surveillance Program (ECWHSP). The ECWHSP, an extension of the Coal Workers’ Health Surveillance Program (CWHSP), was developed in collaboration with the Mine Safety and Health Administration (MSHA) to reduce potential barriers to participation in the screening program and investigate the trends of coal workers’ pneumoconiosis, also referred to as “black lung.” The program is staffed by trained NIOSH personnel who provide screening services to coal miners across the U.S. through two state-of-the-art mobile testing units.

The mobile unit travels to community and mine locations throughout coal mining regions around the United States. Since 2005, nearly 40,000 miners (new and returning) have been screened through the mobile units. Miners are notified in advance about the specific locations where the mobile unit will be stationed and are encouraged to make appointments to participate in the health screening process. 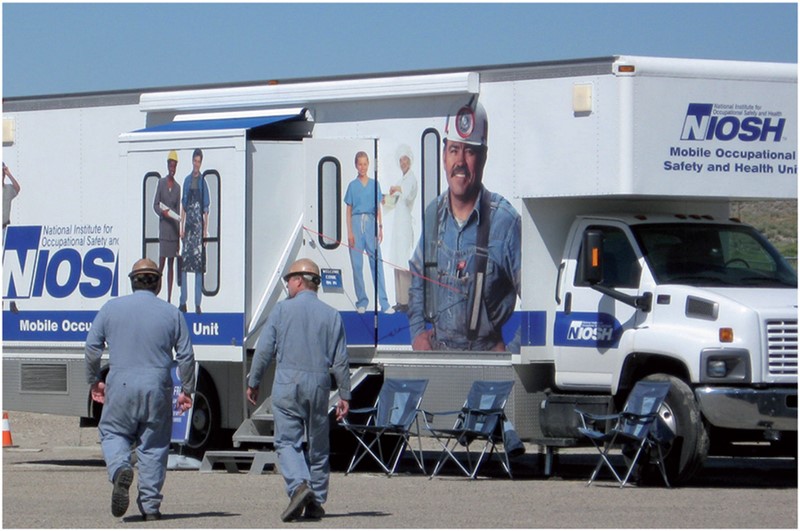 NIOSH directly provides each miner with their screening results. By law, each person’s results are confidential. No individual information is publicly disclosed.

Announcements for times and locations of black lung screenings begin each year in March and run throughout the summer. Although no screenings are currently scheduled due to the COVID-19 pandemic the program hopes to provide screening starting in September 2021(click here for current schedule). Announcements are made through NIOSH press releases, the CWHSP Facebook page (@CWHSP), @NIOSHBreathe Twitter, and the CWHSP webpage. Announcements are also made through local newspapers and radio stations. Further information can be found in our program fact sheet or by calling us at 1-888-480-4042.

In addition to the program offering easy access for coal miners to health screenings, it also allows researchers to identify trends in disease across the nation, by occupation, and across time. CWHSP has played a major role in tracking the burden of respiratory disease in coal miners and in detecting recent increases in pneumoconiosis affecting coal miners.

When regional “hot spots” of rapidly progressive pneumoconiosis, particularly in certain parts of Appalachia were identified in 2005, the mobile unit was deployed to those areas. Data from CWHSP and mobile outreach efforts confirmed an increase in pneumoconiosis after the late 1990s. Potential reasons hypothesized for the increase include longer working hours, increased exposure to respirable coal mine dust including crystalline silica, possibly related to challenges in effective dust control faced by small mines and during the mining of thin coal seams surrounded by rock.

Additionally, prior to 2014, surface coal miners were not formally included in the CWHSP. The ECWHSP mobile unit surveyed surface miners across the country and found that, while prevalence rates were lower than that of underground coal miners, surface coal miners had developed coal workers’ pneumoconiosis despite a perceived less dusty work environment. The screenings also showed that some surface miners even developed the most severe form, progressive massive fibrosis. The work conducted through the mobile screening units helped contribute to surface miners’ inclusion in the CWHSP through formal rule making promulgated by MSHA in 2014.

Christopher Parker is a public health adviser in the NIOSH Respiratory Health Program.

Read about another mobile NIOSH-funded program delivering Lifejackets for Lobstermen.

One comment on “Taking it to the Streets… and the Mines”

Miners are at risk of developing a lung disease called pneumoconiosis because of their exposure to airborne respirable dust—extra fine particles that can be inhaled into lung tissue. Miners have an increased risk of dying from lung cancer when exposed to exhaust from diesel engines for five or more years.