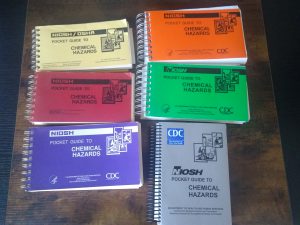 The NIOSH Pocket Guide to Chemical Hazards (NPG) is the most popular NIOSH document produced to date. The NPG informs workers, employers, and occupational health professionals about workplace chemicals and their hazards. The NPG presents key data for 677 chemicals or substance groupings (such as cyanides, fluorides, manganese compounds) that are found in workplaces. The guide does not give all relevant data on a chemical but offers key facts in an abbreviated format. The information found in the NPG helps users recognize and control occupational chemical hazards.

In 1978, NIOSH and OSHA released the first Pocket Guide to Chemical Hazards. Today, the NPG is in its 6th edition and now includes an online version and a mobile app, NIOSH Pocket Guide to Chemical Hazards App (mNPG). NIOSH offers the NPG for free at CDC-INFO. NIOSH has distributed over 671,000 copies of the NPG and nearly 639,000 copies of the CD-ROM. The NPG consistently remains one of the most requested NIOSH documents and was the second most downloaded document in 2021; that does not include all of the people who used the online and mobile app versions. 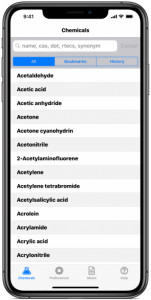 The mobile app was released in 2016. During the development, NIOSH sought input from users through the blog Help! What do you want from a mobile Pocket Guide? and the 157 comments received helped form the mNPG. In 2021, the app was downloaded nearly 84,000 times.

The mobile app provides additional functionality and allows users to:

Despite the popularity of the mNPG, there will always remain a need for the printed version. Emergency responders prefer hard copies in their vehicles and a physical document is useful when the internet or cell service are not available or when the power is out during an emergency. In 2018, for the 40th anniversary of the NPG, NIOSH redesigned the NPG and asked for input from users on the blog Help Us Redesign the NIOSH Pocket Guide and through focus groups. The 6th version of the NPG was informed by the comments received. Later in 2022 NIOSH will release the 7th version of the NPG with several updates.

As we highlight this important resource for the 50th anniversary of NIOSH we leave you with some comments from NPG users. Their testimonials describe the value of the NPG better than we ever could.

“I have used your “pocket” guide since the first edition.”

“I use the NPG in our training constantly with our apprentices and journeymen.”

“The NPG is one of the most valuable resources available to augment SDS sheets and aid both employees and management in communicating the hazards associated with chemicals. “

“I use the present pocket guide to help my customers decide what respiratory protection is required in any given situation where hazards to the worker are present. It is a tremendously useful tool…”

“I encourage all employers to have a copy on hand for quick, easy reference.”

“This book is widely used in Latin America, is a great source of information for HazMat management and emergency response good job.”

“The information provided is one of the most proactive safety preplanning prevention tools around and when things go wrong the guide is the most important tool to mitigating an event in the safest manor possible.”

Debbie Hornback, MS, is a Health Communication Specialist in the NIOSH Division of Science Integration.

3 comments on “The NIOSH Pocket Guide to Chemical Hazards”

The NIOSH Pocket Guide is one of my most commonly used resources for selecting respiratory protection in my practice. I’ve used both versions (printed & mobile). In addition, as a person that teaches respiratory protection training courses, such as my 2-day course on respirator selection and cartridge/filter change schedules, I use the printed version. Very glad to see NIOSH recognized the need for both. Can’t wait for the newly revised NPG to be released. Other than the release date, the question becomes what will be the color for the cover? My guess is blue.