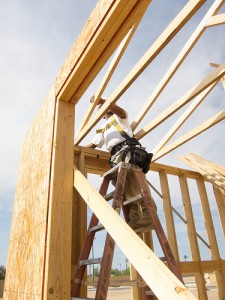 On Workers’ Memorial Day we acknowledge the toll that work-related hazards and exposures have taken on American workers, their families, and communities. Each year, NIOSH collaborates with the staff of CDC’s Mortality and Morbidity Weekly Report (MMWR) to publish the most recent annual statistics, NIOSH analyses of occupational illness and injuries, and investigations of occupational hazards. Here are some of the key findings from this year’s Workers Memorial Day issue of MMWR.

There are many resources and tools available to employers, unions, and workers for the prevention of ladder fall injuries.  A newly available tool is the NIOSH Ladder Safety app, free in both English and Spanish for Android, iphone and ipad. The ladder safety app includes guidelines for choosing, inspecting and using an extension ladder. An exciting feature of the app is the ability to determine whether your extension ladder is positioned at a safe angle by placing the phone against the ladder.  Fall injury prevention research, and the translation of that research into practical applications, is a priority for NIOSH.

NIOSH is also collaborating with the Occupational Safety and Health Administration (OSHA) and its stakeholders, including the NORA Construction Sector Council, in the “Safety Pays, Falls Cost” Campaign to Prevent Falls in Construction. From June 2-6, 2014, the ‘Stop Falls’ campaign will sponsor a National Safety Stand-Down to Prevent Falls in Construction to encourage employers to talk to their employees about fall hazards and prevention measures. A goal of the Stand Down is for 25,000 employers to stop work and conduct a toolbox talk with their employees on a safety topic such as ladder safety, fall protection equipment, or scaffold safety.

Lead can have toxic effects on all organ systems of the body. Although a variety of methods are available to protect workers from lead exposure, each year, thousands of workers are found to have elevated blood lead levels (BLLs), defined as ≥ 10 micrograms of lead per deciliter of blood.  Since 1987, the NIOSH state-based Adult Blood Lead Epidemiology Surveillance Program (ABLES) has tracked elevated BLLs among adults, focusing on the identification of work-related cases and sources of exposure.

Indoor firing ranges are a recognized source of exposure to lead dust.  Employees of firing ranges, law enforcement officers who practice at firing ranges, and construction industry workers who repair firing range buildings are all at risk for lead exposure at these facilities. In addition, recreational users of firing ranges and the families of both workers and customers are at risk for lead exposure. NIOSH analyzed 2002-2012 ABLES data, and found that elevated BLLs for 2,056 law enforcement officers and firing range workers were reported by laboratories and physicians during that time period. In their MMWR report, NIOSH and the Washington State Department of Labor & Industries described two public health investigations of lead dust exposures at firing ranges – one conducted by the Washington State Division of Occupational Safety and Health, and one conducted by the NIOSH Health Hazard Evaluation program. Both investigations revealed multiple violations of the workplace lead standard.  Blood lead testing of firing range employees of both locations revealed elevated BLLs as high as 58ug/dl and construction workers with BLLs as high as 158 ug/dl. The authors recommended reducing lead exposure to firing range employees by using lead-free bullets (to eliminate exposure), improving ventilation, and using wet mopping or high efficiency particulate air (HEPA) vacuuming to clean.

Family members can also be exposed to lead and other toxins through take-home exposures. Previous reports have illustrated that uncontrolled lead dust in workplaces can lead to workers transporting that dust into their homes and vehicles, endangering family members. Three children and two adult family members of four construction workers at the Washington State firing range tested positive for elevated BLL. This report is a timely reminder that failure to comply with occupational safety and health standards can also present risks to those outside the workplace.

What does smoking have to do with occupational safety and health? Debbie Blackwell, PhD of the National Center for Health Statistics (NCHS) used 2008-2012 National Health Interview Survey Data to estimate the percentage of current smokers among employed adults by industry sector. These data help employers and public health practitioners better understand the distribution of health risks such as tobacco use, and target interventions such as workplace smoking cessation programs.  NIOSH promotes integrated health promotion and health protection through its Total Worker Health™ Program. Research has shown that worksite smoking cessation programs are more effective when integrated with occupational safety and health [i].  It is also important to identify worker groups that are at risk for multiple health outcomes, due to both workplace exposures and health behaviors. For example, Dr. Blackwell’s analysis revealed that workers in the construction sector (29.9%) were the most likely to be current smokers, while mining industry workers also had some of the highest rates of smoking. Construction workers and miners are often exposed to respiratory hazards, including asbestos and crystalline silica and other dusts. A recent study of insulation workers found that while a smoker was 10 times more likely to die from lung cancer than a nonsmoker, smokers who had worked with asbestos were about 30 times more likely to die from lung cancer [ii]. The Total Worker Health approach brings together vast knowledge bases of occupational safety and health research with public health prevention to develop effective programs to keep workers safer and healthier.

Dr. Souza is an epidemiologist in the NIOSH Division of Surveillance, Hazard Evaluations and Field Studies

Safe use of ladders

Hazard Alert: Ladders from the Center for Construction Research and Training

Guidelines for healthcare professionals for the management of lead-exposed adults can be found at: http://c.ymcdn.com/sites/www.cste.org/resource/resmgr/OccupationalHealth/ManagementGuidelinesforAdult.pdf

Healthcare providers have a critical role in protecting lead-exposed patents. A previous MMWR report, Very High Blood Lead Levels Among Adults, discussed actions that healthcare providers can take to tailor protections to the needs of a particular worker.

The Whole Worker: Guidelines for Integrating Occupational Health and Safety with Workplace Wellness Programs. From the Commission on Health and Safety and Workers’ Compensation,  California Department of Industrial Relations.

NIOSH would like to thank Doug Weatherwax, Lead Technical Editor-Writer, MMWR, for his assistance in preparing NIOSH content for publication in MMWR.

I read your essay with great interest. And I am pleased to be cited.

useful articles that could add to my knowledge and insight thanks
I think this article is quite useful for me maybe I could be a reference for the future and I hope there will always be more articles like this one that can provide knowledge and insight into the world of education and in particular the public.

Thank you very much!

English Translation:
Thank you for this interesting article, I’ve had much interest in these topics, once again thank you and I congratulate you for your great contribution to safety!