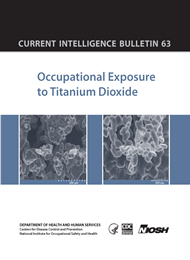 A recently released NIOSH guidance document (NIOSH, 2011) on handling titanium dioxide (TiO2) powders in the workplace generated a high level of interest as it put forward an innovative approach that might have implications beyond TiO2. Specifically it may be the first document (originally released for external review as a draft in 2005) to recommend separate occupational exposure limits for the same material based on particle size. This document signifies increasing attention to evaluating and mitigating risks of emerging hazards in the workplace before adverse health effects occur in workers and could proactively be used for how other poorly soluble, low toxicity (PSLT) particles are controlled in the workplace.

What is the basis for this document?

Distinct exposure limits for distinct size fractions. NIOSH recommendations for TiO2, an insoluble white powder, used extensively in many commercial products, including paint, cosmetics, plastics, paper, and food, as an anticaking or whitening agent, go back to 1988 when it classified respirable dust of this material as a potential occupational carcinogen (NIOSH, 2002). In recent years new toxicity data on the adverse pulmonary effects of exposure to TiO2 indicated the need for revised risk management recommendations including recommended exposure limits (RELs) for fine (defined as primary particle diameters >100 nm) and ultrafine or nanoscale (defined as primary particle diameters <100 nm) TiO2. Results from experimental animal studies show persistent pulmonary inflammation and lung tumors for both fine and ultrafine TiO2 in which the dose-response correlated best with particle surface area. These findings of pulmonary effects were consistent with data from other PSLT particles of fine and ultrafine sizes. Since the total surface area of particles per unit mass varies with particle size, and since routine personal sampling instruments for airborne particles measure the mass concentration, NIOSH recommended two mass occupational exposure limits for the two size fractions of TiO2: 2.4 mg/m3 for fine particles and 0.3 mg/m3 for ultrafine or nanoscale particles. In addition, NIOSH declassified fine particles of TiO2 as a potential occupational carcinogen due to the lack of sufficient animal or epidemiologic data to support such a classification, but it found sufficient data from animal studies to maintain this classification for nanoscale particles of TiO2. Similarly for other particulate materials, if the toxicity varies by particle size (at the same mass dose), distinct exposure limits for distinct particle size fractions might be a reasonable approach for protecting exposed workers.

Quantitative risk assessment. The NIOSH document utilizes a standard risk assessment model in the development of exposure limits which relies on animal toxicity data and modeling to translate those data into exposure limits. The observed dose-response relationships in the animal data were used to estimate a benchmark dose for a specified level of adverse biological response (1/10 to 1/1,000 excess risk of pulmonary inflammation or lung cancer). Then the benchmark dose for animals was extrapolated to humans. Human-equivalent lung dose was translated into working life time exposure concentration using a human lung dosimetry model. Since this risk assessment approach relies on animal toxicity data rather than observations of adverse health effects in workers, it is suited for proactive risk assessment of emerging hazards and facilitates introduction of anticipatory risk control measures.

What are implications to industrial hygiene practitioners?

Exposure assessment. The main difference in exposure assessment in workplaces handling TiO2 is the need to differentiate not just by chemical composition but also by size. NIOSH recommends measuring personal exposure concentrations to fine and nanoscale TiO2 with NIOSH Method 0600. If respirable exposure levels to TiO2 are higher than 0.3 mg/m3 (REL for nanoscale TiO2), then additional characterization by electron microscopy is required to determine the particle size and the percentage of ultrafine and fine TiO2 so that the appropriate RELs can be applied. It was recognized in the NIOSH document that new methods of sampling allowing for routine measurements of surface area, chemical composition and particles size are necessary to facilitate quantitative exposure assessment that would more closely align with the risk assessment analysis.

Exposure mitigation. NIOSH estimates that the risk of lung cancer would be less than 1/1,000 at working lifetime exposures to the RELs, and that lower exposures would further reduce the risk. Therefore, NIOSH recommends controlling exposures to TiO2 dust as low as possible, below the recommended exposure limits. Use of basic engineering control systems such as enclosures and local exhaust ventilation was shown to greatly reduce exposure levels for both fine and nanoscale particles, while filters used in HVAC systems and respirators were reported to capture fine and nanoscale particles with stated levels of efficiency. Engineering control techniques such as source enclosure and local exhaust ventilation systems are identified as the preferred methods for preventing worker exposure to TiO2 aerosols. If engineering controls and work practices cannot reduce worker TiO2 exposures to below exposure limits then a respirator program should be implemented. In addition, in workplaces where there is potential worker exposure to TiO2, employers should establish an occupational health surveillance program. Such a program can help to assess whether control measures are effective and identify new or unrecognized problems and health effects and, therefore, can help in preventing illness.

What will be the impact of the NIOSH document?

NIOSH Current Intelligence Bulletin on TiO2 reflects increasing attention to evaluating and mitigating risks of emerging hazards in the workplace before adverse health effects occur in workers. This change could be considered as a transition from a reactive to proactive paradigm in occupational risk management (Murashov & Howard, 2009). More recently, the draft NIOSH Current Intelligence Bulletin on carbon nanotubes and nanofibers further extends the approach developed in the TiO2 document (NIOSH, 2010). It also uses benchmark dose modeling methods based on animal studies, which are translated into an exposure limit in the absence of data about adverse effects in workers. Similar to the TiO2 document, it recommends an exposure limit that includes all types of carbon nanotubes and nanofibers that differ in size, surface chemistry and structure. The proposed REL for CNT and CNF of 7 µg/m3 is constrained by the limitations in the sampling and analysis and thus the mitigation of risk focuses on the control of exposure to as low as practical.

In conclusion, the NIOSH document on TiO2 emphasizes anticipating and preventing risks of existing and emerging hazards in the workplace.

Dr. Murashov is a Special Assistant for Nanotechnology to the NIOSH Director. He is a member of the U.S. Nanoscale Science, Engineering and Technology sub-committee. He also leads nanotechnology projects in International Organization for Standardization, Organization for Economic Co-operation and Development and World Health Organization.

Posted on May 9, 2011 by Vladimir Murashov, PhD
Categories Chemicals, Nanotechnology

Thank you for this. I’ve added some of the data here on to my thesis.

It’s very good post! I really appreciate it. This information includes findings from NIOSH’s own strategic research program, as well as research by scientific partners from the United States and abroad. NIOSH’s Approaches to Safe Nanotechnology is one resource routinely recommended as it provides useful, practical, and current information on a wide range of topics directly relevant to engineered Nan scale material manufacturers, processors, and users.

Excellent document! Recommend referencing the the suggested occupational exposure limit for CNT’s in the introduction as 7 ug/m3 and not 7 g/m3.

Thank you for catching this typo. We have made the correction.

My sister had been working at a titanimum dioxide plant for over 20 years before she became very unwell with a condition that no doctors can identify. This condition has significantly impacted on her quality of life. Post the release of this document are all plants producing titanium dioxide implementing appropriate health surveillance procedure?

Thank you for your comment. NIOSH does not have information on whether plants producing titanium dioxide are implementing the recommended surveillance programs. NIOSH recommends that employers whose workplaces have potential worker exposure to TiO2 should establish an occupational health surveillance program. However, this is a recommendation, not a legal requirement.

Nice document! informative regarding negative affects of titanium dioxide particles present in some of the powders used in nursing homes.

Has there been an updated report on the use of titanium dioxide nanoparticles and the occupational or environmental exposure risks?

Thank you for your comment. The NIOSH Current Intelligence Bulletin 63: Occupational Exposure to Titanium Dioxide published in 2011 and highlighted in this blog remains the most recent NIOSH publication on this subject.

It is widely known that Titanium dioxide or titania has a broad range of applications due to its unique properties like its anti-corrosive properties, high stability, and its high refractive index. It finds its application in printing inks, chemical fibers packaging, rubber, construction, and water tanks; it is also used in coating and painting applications. The broadening usage of titanium dioxide as a material in solar photovoltaic (PV) is giving manufacturers operating in this market a new opportunity.

I have read your article and Thanks for sharing your information