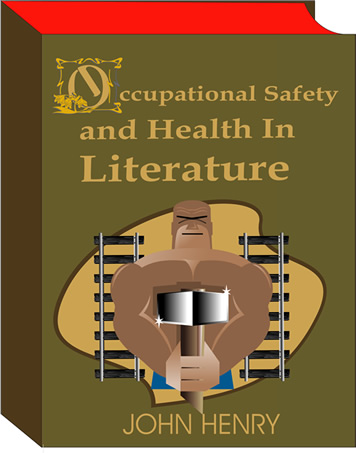 Mikael Blomkvist risks his life to conduct investigative journalism. Candido and America navigate day-labor sites and accept significant hazards in their work. Abilene, a black maid in 1960’s Mississippi, describes her working conditions in white households. Jacob Jankowski cares for circus lions and elephants but fears his boss and co-workers. Books like The Girl Who Played with Fire, The Tortilla Curtain, The Help, and Water for Elephants can get to the heart of workplace issues within the context of a page turner. Books have the ability to go beyond the fatalities and injuries reported in the news or the safety information presented by NIOSH and others to delve into the complexities of how these issues affect individuals, families, and communities.

A prominent fiction book to first address the issue of workplaces was Upton Sinclair’s The Jungle. The book follows an immigrant Lithuanian family through their struggles in 1906 Chicago. The book prompted individuals and voters to question their food safety but also enlightened them on work hazards in the meatpacking industry.

Many non-fiction books chronicle the lives of working people. Studs Terkel, an oral historian, produced a best seller in 1974 by giving firsthand account of ordinary workers and what they think of their jobs; from custodians to a nun, from a police officer to farm workers, all had their story. The book Working was later made into a PBS documentary of the same name. Sharing a similar sentiment, Tom Jones set out to find the everyday stories of people in Working at the Ballpark. Blue-Collar Journal: A College President’s Sabbatical by John R. Coleman is the story of a college president who spent his sabbatical doing menial jobs around the country. From trash collecting to digging ditches, this finance professor learned about finances from becoming a working man. He also learned the enjoyment of a hard job done well. Similarly, in Nickel and Dimed by Barbara Ehrenreich, the author travels the country working the “lowliest” jobs for poverty-level wages.

The Tortilla Curtain is one of the few books that describes an occupational chemical over-exposure. Written by T.C. Boyle, the book follows a Hispanic immigrant couple as they venture into the U.S. looking for work. This couple’s problems are contrasted with the problems of an upper middle class couple whose paths cross. As a day laborer, America was put in the position of using solvents to clean pottery without gloves resulting in significant burns and discomfort.

Occupational safety or rather the fatalities that result in its absence is a more common theme. Starting with the 1885 novel Germinal by Emile Zola about a coal miner’s strike, there are many novels about coal miners mostly revolving around disasters. Digging Out by Katherine Leiner (2004) is the fictional story of loss and family reconciliation revolving around a true mine disaster in Aberfan, Wales. A cross between literary fiction and science fiction, Spin State by Chris Moriarty revolves around the life of an alien living through a mining accident on a colony planet. Hazard by Gardiner Harris is a mystery which takes place in Eastern Kentucky. Inspector Will Murphy, brother of the mine owner, investigates a mining accident and suspects something suspicious… Continuing with the workplace fatality theme, The Perfect Storm by Sebastion Junger describes a close-knit New England fishing town. This true story about the “storm of the century” and the sword boat Andrea Gale gives a detailed account of long sea voyages, short home furloughs, relationships, and the lives of fishermen. The story also delves into the training of the Air National Guard in their daily job of rescuing people at sea.

Occupational radiation exposure is highlighted in Madame Curie: A Biography by Eve Curie. The book is an excellent motivating story of a great scientist who fought many hardships including poverty while growing up in Poland, the male-dominated university establishment, and unknowingly the hazards of radiation. She worked intimately with radiation since she mined it herself from pitchblend, never understood a need for precautions for radiation exposure, and died from leukemia. Bill Bryson in A Short History of Nearly Everything reports that Dr. Curie’s notebooks are kept in a lead-lined trunk because today they still contain dangerous levels of radiation.

Of these books, my favorites are Blue Collar Journal, The Perfect Storm, and Madame Curie. What are your favorites? Have you read some of these books? Should you add some of these books to your reading list? Should we add some to ours? We would love to hear your thoughts and your occupational safety and health book choices. Do they show an accurate picture of the job and its hazards and solutions?

View an updated list of Books with Workplace Safety and Health Themes including those recommend by blog readers.

CAPT  Estill is an Industrial Hygiene Supervisor in the NIOSH Division of Surveillance, Hazard Evaluations, and Field Studies.

19 comments on “Tales of Toil”

Thanks for a great blog. The Jungle was meant to be a socialist rallying cry, but, as disappointing as it was to Sinclair, the real power of the book came as he described working conditions and food impurities. The modern equivalent might be Eric Schlosser’s Fast Food Nation – some pretty harrowing stuff.

A lyrical (and sad) book is How Green Was My Valley by Richard Llewellyn (a man with far too many “L”s in his name). It tells the story of the Morgan family, miners in South Wales. Disasters at the mine rock the family and the community.

More recently (and humorously), Iain Levison cynically chugs through any number of difficult and dangerous jobs in A Working Stiff’s Manifesto.

You mentioned Bryson’s Short History. His newest book, At Home, ambles through something of a social history (or the parts that interested him, at least). In the process, though, he includes some poignant descriptions of work hazards and tragedies.

Thanks Cheryl…I really enjoyed your list…and have definitely put the ones I’ve missed on my reading list. One I read a long time ago and have never forgotten is “The Dollmaker” that follows a family from the hills of Appalachia (where they know how to survive) to industrial Detroit (where they have to learn a new set of rules). Very powerful!

I work at a college with a lot of returning students. Work-related literature often goes over well because it’s a subject my students are interested in. Thank you for highlighting the importance of this theme.

Ahab’s Wife is excellent, by Sena Jeter Naslund. It is the story of Ahab’s child bride, and her experiences working as a cabin boy (in disguise) on a whaling ship. My favorite story of all time!

Thanks for an excellent article. Another book is “The Killing of Karen Silkwood” by Richard Rashke. This is a true story about a union activist who was concerned about safety issues at a plutonium plant. Her death in a car accident was very suspicious. The movie “Silkwood.” is based on this story.

Moby Dick, itself, has some moments…
“The harpoon was darted; the stricken whale flew forward; with igniting velocity the line ran through the groove;- ran foul. Ahab stooped to clear it; he did clear it; but the flying turn caught him round the neck, and…”

Some other good ones:
In the Skin of a Lion, Michael Ondaatje
Ludlow, David Mason
Animal’s People, Indra Sinha (more “env” than “occ”)
An Enemy of the People, Henrik Ibsen (more “env” than “occ”)
Young Men and Fire, Norman Maclean (non-fiction)
Narrative of the Life of Frederick Douglass, an American Slave, Frederick Douglass (if we define “occupation” broadly)
Johnny Got His Gun, Dalton Trumbo (if we define “occupation” broadly)

There have been several fictional and factual books about the horrible toll of silicosis among workers who drilled the Gauley Bridge, WV, hydroelectric tunnel in the 1930s. Hubert Skidmore’s HAWKS NEST (1941) is one of the classic novels, a masterpiece of Appalachian literature and a scathing social document comparable to THE GRAPES OF WRATH. It was recently reprinted by a university press with an interesting introduction about the background of the novel.

Last I heard, search and rescue was assigned to the USAF inshore and to the USCG offshore. Has this changed?

The incident described in the book is from the 1991 search of the Andrea Gail. The NY Air National Guard 106 Rescue Wing and the US Coast Guard responded. An Air National Guard helicopter went down in the incident and a rescue swimmer lost his life. A US Coast Guard cutter responded to the downed helicopter. Both were involved in this incident. It appears your information is correct. I remember something about when the storm hit, the Guard helicopter just happened to be the most available to respond instead of the Coast Guard.

The book that inspired me to become an industrial hygienist is “Muscle and Blood” by Rachel Scott. I read it in 1975! It contains a series of poignant stories about people who worked in auto plants, a beryllium refinery, farms, steel mills, and a variety of other industries, and suffered occupational disease. Interviews with the victims drive home the importance of protecting people at work. A good read.

Jane Kirkpatrick’s novel, A Flickering Light, is set during the early 1900’s. Its main character, a female professional photographer, experiences job hazards ranging from toxic chemicals and explosive powders to discrimination as a woman in a “man’s profession.”

The Last Town on Earth by Thomas Mullen highlights hazards in the logging industry in Washington state along with early labor efforts all set within the context of a small town’s self imposed quarantine during the 1918 influenza outbreak. A great read!

I am fun of reading suspense stories. As I read the story entitled “The Killing of Karen Silkwood”. I really like it since it’s a true to life story…

I just finished reading The Tortilla Curtain last week. It was one of the few books that I’ve enjoyed that was written by T.C. Boyle. Thanks for the info, Cheryl.

hmmm… this is good one..
i just bought Water for Elephants by Sara Gruen, this is interesting book, I think?

It is a great read. I invested funds into this and I really enjoyed it. Great summary of so many interesting books. Thank you.

Here are a couple of more recent books that focus on occupational struggles.
The Martian by Andy Weir (2014) highlights some of the hazards potentially faced by an astronaut on Mars.
The Whip by Karen Kondazian (2012) is a great book about a woman who lives as a man and becomes a famous stagecoach driver. Inspired by a true story, the novel shows the lack of opportunity (in the workplace and otherwise) available to women in the 1800’s.