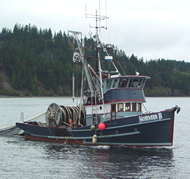 The television documentary Deadliest Catch, the novel The Perfect Storm, and media accounts of tragedies at sea have publicized the all-too-real hazards of commercial fishing. Commercial fishing is the most dangerous occupation in the U.S., with an annual fatality rate of 142 deaths/100,000 fishermen, almost 36 times higher than the fatality rate for the average U.S. worker (4.4/100,000). The NIOSH Alaska Field Station has played an important role in significantly improving safety among commercial fishermen in Alaska. An emphasis on understanding the commercial fishing culture and the rugged work environment coupled with quality science has helped NIOSH create practical prevention recommendations that are now commonly used in the industry and are saving lives.

From 1990 to 2006, there was a 51 percent decline in the annual fatality rate. This reduction in fatalities is due to tailored prevention strategies for specific types of fishing operations (i.e., gillnetting and pot fishing) and to the U.S. Coast Guard implementing new safety requirements, including the use of survival equipment, in the early 1990s. These safety requirements contributed to a significant increase in the proportion of fishermen who survive vessel sinkings/capsizings, from 73 percent in 1991 to 96 percent in 2004.

While the number of occupational deaths in commercial fishing in Alaska has declined, it remains a dangerous occupation. There is a continuing pattern of losing 20 to 40 vessels every year, and about 100 fishermen must be rescued each year from cold Alaska waters as we saw in the recent tragedy aboard the Alaska Ranger where 42 people were rescued and five lost their lives, including the captain. Furthermore, the individuals involved in the U.S. Coast Guard Search and Rescue operations are themselves at considerable risk for injury or death during rescue attempts.

While the hazards of commercial fishing in Alaska are well documented, there is little published literature examining safety problems in the rest of the U.S. fishing industry. In a recent study, NIOSH identified high risk fisheries on the West Coast and the associated risk factors contributing to fatalities. The findings revealed that the West Coast region had a fatality rate 70 percent higher than the reported national average, and two times higher than the rate in the Alaska fishing industry during the same time period. The dungeness crab fleet had the highest fatality rate of any fishery on the West Coast or in Alaska, including the Bering Sea crab fishery. A summary of the study including the methodology can be found in this week’s Morbidity and Mortality Weekly Report.

The results of this investigation were presented to the U.S. Coast Guard District 13 (covering Washington State and Oregon) Command staff in November 2007. NIOSH recommended that safety interventions should be tailored to the specific groups of vessels along the West Coast and emphasis should be placed on the Northwest dungeness crab fleet with targeted pre-season safety inspections and safety and stability training. Other areas of emphasis should include improved weather reporting, the prevention of hazardous bar crossings in poor weather, training on the deployment and use of life rafts, and increased immersion suit and personal flotation device usage.

Based on the successes experienced in Alaska, implementing these prevention strategies should significantly reduce fatalities in West Coast fisheries and help protect the men and women who risk their lives working in the most dangerous occupation in the United States.

Dr. Lincoln is an Injury Epidemiologist in the NIOSH Alaska Field Station.

More information on NIOSH research in the commercial fishing industry can be found on the NIOSH website. In addition, NIOSH recently produced a video, The Most Powerful Thing, in collaboration with the U.S. Coast Guard. The video, which describes deck safety awareness for purse seiners, can be downloaded or viewed via streaming video on the NIOSH website.

I am a graduate student at Old Dominion University and I am enrolled in a Risk Assessment Course. I understand that the “West Coast region had a fatality rate 70 percent higher than the reported national average…” Would a cohort study of the various fishing operations in various locations be useful in standardizing a safety program for fishermen? I understand that weather patterns on the Pacific Ocean differ from the weather patterns experienced on the Atlantic Ocean; therefore, it might not be fair to compare the west coast to the east coast. However, Japan and other parts of Asia, that have large fishing operations, would face similar problems to the ones that the West Coast of the U.S. faces. A possible cohort study of the fishing operations in Japan, Alaska, and the Washington/Oregon coast could reveal various safety standards that should be implemented to reduce that high fatality rate in the West Coast region.

The areas of emphasis of the cohort study should probably include the areas noted at the end of the article (improved weather reporting, stability training, etc.), but should design of the vessel and the safety equipment available on the ship be included in the study? I think this information could also be implemented in the Prevention through Design initiative that NIOSH is coordinating.

There are many types of safety problems in the fishing industry that need to be improved, and different study designs can be used to gather and analyze data. Fatal traumatic injuries are a major focus of research at NIOSH since the fatality rate for fishermen continues to be so high. Injury surveillance of the fishing workforce is a highly effective method for studying occupational fatalities, and NIOSH currently maintains a surveillance system which collects data on every fatality in the US fishing industry with over 70 variables collected for each traumatic death.

Incident location and fishery variables are collected so that, as you pointed out, we can accurately compare risk factors while taking into account differences in weather patterns and other conditions specific to certain areas.

Design of the vessel and the safety equipment available on the ship are important considerations. These are collected to some extent in the surveillance system, but possibly not to the fullest extent. Usually when a hazard is identified in the surveillance data that is related to vessel design or safety equipment, NIOSH engineers who specialize in fishing vessel safety will conduct qualitative field work to learn more about the specific problem and design solutions. Examples of this type of research to practice in the fishing industry are the “NIOSH Emergency Stop” for deck winches on purse seine vessels and the “Hatch and Door Monitoring System” designed to promote watertight integrity. More information about both can be found on the NIOSH Commercial Fishing Safety topic page.

Japan and other parts of Asia generally have different types of hazard issues than the U.S., in particular those introduced by artisanal fishing activities—small-scale commercial or subsistence fishing practices often by coastal or island ethnic groups using traditional techniques (rod and tackle, arrows and harpoons, throw nets and drag nets) and sometimes traditional boats. Perhaps safety lessons applied and learned on the developed Asian fishing fleets could be used in the U.S. and vice versa.

Thank you for your thoughts and ideas on this topic. There is much work to be done to improve safety in the fishing industry, and fresh ideas are always needed and welcome.

Was this study controlled for the dramatic decrease in the amount of full time fishing from 1990 to 2006? The 51% decline in fatality rates may be exceeded by the decline in hours on the sea by those in the fishing industry.

Jay, That is a great question. Yes, we have to control for the dramatic decrease in the amount of fishing since 1990. The rate is calculated by taking the number of fatalities and dividing by a Full Time Equivalent or FTE. We calculate the FTE for each fishery. To calculate an FTE we look at the number of vessels participating in a fishery, the number of days at sea these vessels operate and the average number of crew member on board each type of vessel. We do this for each year so that we understand how this number changes over time and we are sure that the drop in fatalities is not simply due to fewer days at sea.

If you would like more information about this process, I can refer you to a couple of our papers that provide a more in depth explanation.

More information on NIOSH research and prevention efforts in commercial fishing can be found on the NIOSH Commercial Fishing Safety Topic Page.

Additionally, these and other issues will be discussed at the upcoming Fourth International Fishing Industry Safety and Health Conference (IFISH 4). More information can be found at http://www.ifishconference.org

I think this is fantastic that the death rate declined so dramatically for Alaska fisherman. I completely agree with what you said about improved weather reporting and prevention of dangerous bar crossing in bad weather.
If weather reporting could be more efficient without any delays then these fishermen would be able to make intelligent decisions. Also, there should be restrictions on where boats can go in certain weather conditions.
Fishing boat captains should not always be able to make this call as the captain of the Andrea Gail did (The Perfect Storm).

I am a fisherman myself , have been doing it fot the past 30 years with very few incidents, eventhough I agree that the Deadliest Catch was really dangerous , I really enjoyed the show as a fisherman, expecially when those guys came home with a great catch and was well rewarded. On the safety side I totally agree, at sea its no mans land and anything can happen.

In my profession most fisherman are poor and can barely make it so they cut down on the safety equipment. I tend to cut down on other things but keep my safety equipment up-to-date. Glad to hear you guys at NIOSH are doing something about it , Keep up the good work.

Ps: do you have a fishing seminar for safety.

Thank you for taking the time to read about our research. Congratulations on your safe operations.

NIOSH sponsors an international safety and health conference for the fishing industry about every three years. You can check it out at http://www.ifishconference.org

I will take some time to check out your website as well.

Thanks so much for contacting us.

Hi, this is a very interesting blog page and ive enjoyed reading many of the articles and posts contained on the website, keep up the good work and hope to read some more interesting content in the future.
– Jolie MARTENS