The Evolution of Elastomeric Half-Mask Respirators and Exhalation Valves 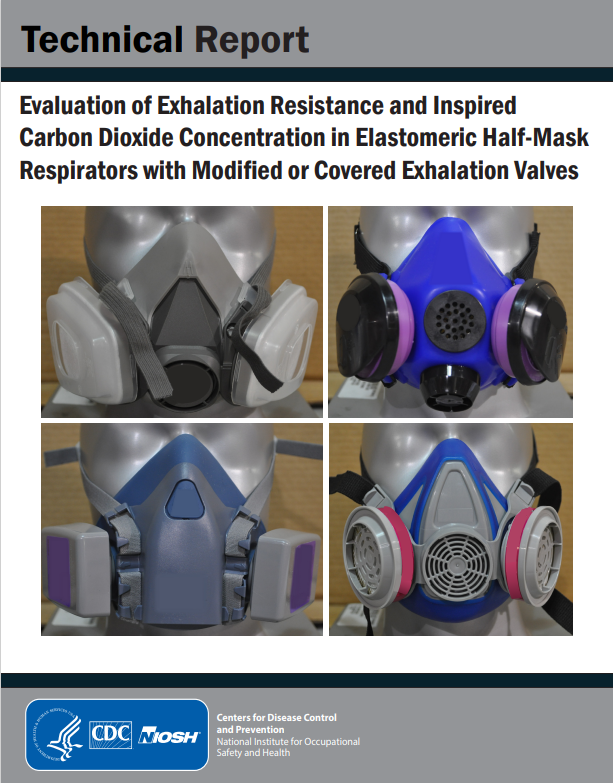 Interest in using elastomeric half-mask respirators (EHMRs) as an alternative to N95®* filtering facepiece respirators (FFRs) in healthcare settings is growing because of their ability to be cleaned, disinfected, and reused. During the early stages of the COVID-19 pandemic, the high demand for N95 FFRs caused national supply shortages, leading organizations to rely on other types of respiratory protection such as EHMRs. However, at that time, all NIOSH Approved® EHMRs had exhalation valves that provided greater comfort to the user by opening as the pressure in the respirator builds up—for example, when a user exhales. This raised concerns that EHMRs may not be suitable for use in environments where the user may be infected with a disease that is spread through respiratory droplets and very small particles that could contain a pathogen.**

During this evolution of EHMRs and exhalation valves, research was needed to understand the impact that modifying, covering, removing, or adding filtered adaptors may have on the respirator user. These changes to EHMRs could result in higher exhalation resistance or elevated concentrations of carbon dioxide (CO2) gas in the respirator facepiece. As a result, users might find wearing EHMRs uncomfortable, which could reduce acceptance among workers. To inform policy and respirator design decisions during COVID-19 and beyond, NIOSH studied the effects of modifying or covering EHMR exhalation valves and published a technical report detailing the findings earlier this year.

NIOSH researchers collected data on nine different combinations of facepieces, filters, and other required parts that make up an EHMR. In a lab setting, researchers tested each combination with either modifications or valves covered with one of two types of surgical masks. Modifications made to the EHMR involved the removal of inhalation valves to allow expelled breath to exit through the filters while the exhalation valves were blocked with duct tape. Researchers tested each EHMR combination (1) without modifications, (2) with modified inhalation and exhalation valves, (3) covered by a Level 1 surgical mask, and (4) covered by a Level 3 surgical mask. During testing, researchers studied two major factors affecting comfort and safety—exhalation resistance and inspired (breathed in) CO2 levels.

Exhalation resistance is a measure of how hard it is for a person to breathe out while wearing a respirator. Blocking the exhalation valve and removing the inhalation valves redirects expired air through the EHMR filters, increasing the wearer’s breathing resistance. The concern with this redirection is the effects it has on the body and the discomfort it may cause. Researchers used NIOSH standard testing procedures (STPs) to simulate exhalation resistance expected in a healthy person performing work while wearing an EHMR to determine if the modified EHMRs met NIOSH’s minimum performance requirements.

When an EHMR is worn, most CO2 leaves through the exhalation valve with only small amounts staying in the facepiece. Blocking the exhalation valve increases the stagnant air in the respirator. This may lead to higher amounts of CO2 being rebreathed. Inspired CO2 levels higher than 2% may cause side effects such as discomfort, tiredness, dizziness, difficulty breathing, and headaches. Researchers measured CO2 levels using a NIOSH STP that simulated the amount of exhaled CO2 that would be available for inhalation in an average healthy adult using a mechanical breathing machine.

Now that there are adequate supplies of NIOSH Approved respirators, including EHMRs without exhalations valves or with filtered adaptors, organizations are back to conventional practices. EHMR exhalation valves should no longer be covered or modified. Covering the exhalation valve or modifying EHMRs in any way voids the NIOSH approval for that respirator. This also results in an Occupational Safety and Health Administration violation since respiratory protection programs require the use of NIOSH Approved devices.

The approach used for this study was valuable and appropriate given the challenges that presented at that time. However, beyond informing policy when respirators were in short supply, this study provides broad evidence that EHMRs without exhalation valves or with adaptors that filter exhaled breath may be designed that are safe for the user. This data was an important supplement to those data collected for those EHMRs without exhalation valves or with filtered exhalation that received the NIOSH approval.

This study provided important evidence regarding user safety for this evolution of EHMRs.  The data suggests that increased exhalation resistance and CO2 levels may be experienced. Future research should explore the impact that factors such as increased ambient temperature and elevated work rates and task duration may have on the user comfort and tolerability with respirator use guidance, policies, performance requirements, and test methods being updated as appropriate.

A new NIOSH study is underway to look at EHMR use in healthcare settings and will include commercially available EHMRs both with and without exhalation valves and exhalation valve filter adaptors. This study will also include a NIOSH developed prototype of a reusable EHMR designed to meet the specific needs of healthcare workers and prototypes of exhaled breath filter adaptors for commercial respirators. NIOSH will look to determine the effect of commercially available EHMRs in simulated healthcare activities utilizing physiological measurements and will collaborate with respirator manufacturers by sharing the study’s results. Additionally, future work should include studies using human subjects to ensure that this ongoing EHMR evolution considers all types of potential users, their tasks, and the associated duration and work rates of these tasks.

To find a NIOSH Approved EHMR without an exhalation valve which filters breath in both directions to address source control concerns, check out the NIOSH Certified Equipment List and select “Non-Valved, (i.e., no exhalation port) Particulate-Filtering Elastomeric Half Mask Respirators (NV EHMRs).”

*  N95® and NIOSH Approved® are registered certification marks of the U.S. Department of Health and Human Services.

In this sentence, “This raised concerns that EHMRs may not be suitable for use in environments where the user may be infected with a disease that is spread through respiratory droplets.” the word “droplets” is misleading. It refers only to the balistic fraction of respiratory particules of organic liquid emitted by human being with a size of 100 microns and more. The word “particules” would be preferable and more inclusive because it includes particules of smaller sizes that are inhalable, the aerosol fraction.

Thank you for your comment. We edited the sentence you highlighted for clarity.