Workplace Medical Mystery Solved: What Is Making This Roofer Sick? 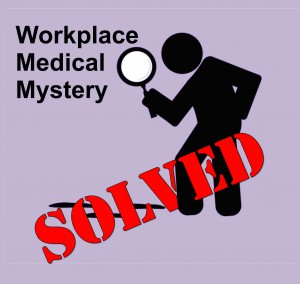 Ray worked as a roofer and started feeling sick during work. His symptoms started halfway through the first day and, by the end of the second day, he felt even worse with a headache, cough, shortness of breath, and chest tightness. At the doctor’s office, his tests came back normal. Read more about his case  here.

When Ray and his coworkers got sick, the roofing company ordered an investigation. On the days crew members got sick, they were placing a rubber membrane on the roof using a spray gun to apply a polyurethane foam. Investigators determined that exposure to 4,4’-Methylene-bisphenyl isocyanate (MDI) during the polyurethane foam application was causing the crew members’ symptoms.

Investigators took personal breathing zone and area air samples while crew members sprayed the foam and cleaned the spray gun. They observed the entire shift, collecting air samples on different days, and interviewed crew members. More than half of the personal breathing zone samples for MDI exceeded occupational exposure limits Eight of the 26 samples exceeded the NIOSH Recommended Exposure Limit of 50 micrograms per cubic meter (μg/m3) while 6 exceeded the NIOSH and Occupational Safety and Health Administration (OSHA) ceiling limit of 200 μg/m3. In addition, more than half (4 of 7 employees) reported symptoms consistent with isocyanate exposure.

Investigators observed poor hygiene and work practices, including improper use of respirators. Like Ray, many of the crew members took off their respirators to cool off or talk to their coworkers and some of his coworkers were not cleanshaven. Respirators must be selected, inspected, and maintained to be effective and protect workers. Certain conditions, like having facial hair and removing the respirator may expose workers to potentially hazardous levels of MDI. While Ray kept a t-shirt on, some of his coworkers went shirtless, increasing the chance of exposure through the skin. The crew wore cotton gloves, but cotton may not adequately protect workers’ hands from MDI exposure. Neoprene, nitrile, or butyl rubber gloves provide better protection against MDI. They also didn’t typically wash their hands before eating lunch or taking a smoke break.

MDI is an isocyanate. Isocyanate exposure can be through inhalation, ingestion, and absorbed through the skin. The most common adverse health outcome associated with isocyanate exposure is asthma due to sensitization. Other less common health outcomes are contact dermatitis and hypersensitivity pneumonitis. An isocyanate-exposed worker can become sensitized and develop an asthmatic condition after a single exposure, but sensitization usually takes a few months to several years. The asthmatic reaction may occur minutes or several hours after exposure, or a combination of both, but the late asthmatic reaction is the most common, occurring in approximately 40% of isocyanate-sensitized workers. After sensitization, any exposure, even to levels below an occupational exposure limit or standard, can produce an asthmatic response that may be life threatening. A worker suspected of having isocyanate-induced asthma or sensitization shows symptoms of acute airway obstruction, like:

A worker who was exposed to isocyanates and has similar symptoms should see an occupational medicine physician or other physician who is familiar with the health effects of isocyanate exposure. They may be experiencing negative effects from isocyanates even if their blood tests do no show antibodies indicating isocyanate exposure. Although Ray and his coworkers’ symptoms fully resolved, if anyone on Ray’s crew was sensitized, they would need to be assigned to a job that does not involve exposure to MDI. If a worker is sensitized to MDI, they could be sensitized to all isocyanates and isocyanate-containing materials. Any worker diagnosed with occupational asthma caused by MDI-containing roofing compounds should be immediately accommodated in a job that does not involve MDI exposure.

To reduce future exposures during the spraying of MDI-containing foam, Ray’s employer should:

Workplace Medical Mysteries are fictional, however, they are loosely based on Health Hazard Evaluations (HHE) conducted by NIOSH or other reports by NIOSH. Any recommendations made were for the specific facility evaluated and may not be universally applicable and are not to be considered as final statements of NIOSH policy or of any agency or individual involved. HHEs are publicly available at https://www2a.cdc.gov/hhe/search.asp, but the names of individuals and facilities mentioned in this series have been changed to protect their identities. For more information on the NIOSH HHE program, visit www.cdc.gov/niosh/hhe/.

Catherine C. Beaucham, PhD, CIH, is an Industrial Hygienist in the NIOSH Division of Surveillance, Hazard Evaluations, and Field Studies.

4 comments on “Workplace Medical Mystery Solved: What Is Making This Roofer Sick?”

please put my name on your email. i like this site

We are glad you are enjoying the NIOSH Science Blog. To receive an e-mail notification when a new blog is posted, please subscribe at https://blogs.cdc.gov/niosh-science-blog/subscribe/.

It is well known that workers applying two-part spray foam (SPF) for roofing applications and interior insulation are exposed to MDI (isocyanates) which is both a skin sensitzer and asthma inducer. Usually the exposures are worse inside but even the roof applicator and helper can be heavily exposed. Most often it takes multiple exposures before someone cannot tolerate working with the material. The practices that you described on this jobsite are due to the employer not providing the correct controls, PPE and having a respiratory protection program (for interior work supplied air may be called for) and hazard awareness and protections training. BTW there is no medical removal protection for these workers. Your piece made this mostly about worker practices and stating what employer’s “should” be doing. Its more like “shall” be doing.
See the HESIS fact sheet:
https://www.cdph.ca.gov/Programs/CCDPHP/DEODC/OHB/HESIS/CDPH%20Document%20Library/iso.pdf

I used to be the office manager/chief IH in an occupational health clinic. One time an office worker staggered into my clinic about noon, exhibiting severe shortness of breath, headache, coughing, and wheezing. He had a history of asthma, but had been fine before work. Our doc took one look at him and rolled an ambulance, as he was on the verge of collapse.

Meanwhile, I trotted down to his office, where a strong isocyanate odor was apparent. Oddly, it only was noticeable in a small office suite on the ground floor, within a very large three-story building. Checked the roof – and sure enough, contractors were laying a new rubber membrane on the roof. There was a supply air intake that apparently pushed conditioned air directly into that little 5-room suite and nowhere else (yes, this sounds nonsensical but it was a very large building with a lot of crazy designs in both climate control and exposure control ventilation).

The contractors were reprimanded for failing to seal that intake. It was out of scope for me to advise them on their myriad health and safety issues, but I might have said a number of helpful things loudly to my actual client LOUDLY near the work crew.

The gentleman was back at work within a week and came down to the clinic to thank us. That doesn’t happen that often, so I remembered him.