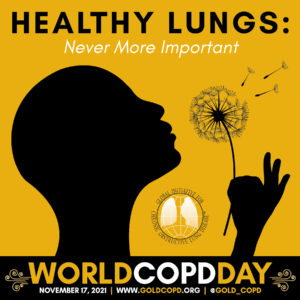 November is National COPD Awareness Month and November 17, 2021 is World COPD Day. This year’s theme, “Healthy Lungs – Never More Important,” highlights that even during the COVID pandemic, COPD remains a leading cause of death worldwide and it remains important to focus on lung health.

COPD, or chronic obstructive pulmonary disease, is a progressive nonreversible disease that makes it hard to breathe. COPD includes chronic bronchitis and emphysema. COPD is the fourth leading cause of death in the U.S. Cigarette smoking is the leading cause of COPD and most people who have COPD smoke or used to smoke. Workplace exposures are also important contributors to the burden of COPD. Long-term exposure to lung irritants—such as air pollution, chemical fumes, or dusts—also may contribute to COPD.

A recent study, Chronic Obstructive Pulmonary Disease and U.S. Workers: Prevalence, Trends, and Attributable Cases Associated with Work, examined COPD prevalence, trends and the proportion of cases attributable to work, during 2012–2018 among workers looking at smoking status, industry, and occupation. The study revealed that there had been an increase in COPD prevalence since 2012. During the period from 2012–2018, overall

Although the exact cause of the increasing COPD trends is unknown, some of these increases could be explained, in part, by higher tobacco smoking prevalence, environmental exposures, and workplace exposures among these workers.

The food services and drinking places industry had the highest percent of COPD cases attributable to industry and motor vehicle operators and material moving occupations had the highest percent of cases attributable to occupation. Workers in these groups are exposed to certain chemicals; dusts; fumes; and vapors, including silica, fiberglass, sawdust, solvents, secondhand smoke, and welding fumes. These exposures have been previously associated with COPD.

Please I would appreciate reading new studies/research from your team. Thanks.

Thanks for your interest in COPD and our blog. If there are any specific topics you would be interested in, please let us know. You can also visit https://www.cdc.gov/niosh/enews/ to sign up to receive NIOSH eNews, the monthly newsletter of the National Institute for Occupational Safety and Health.

Nice Blog Post. Thanks for sharing the wonderful information about the COPD. In this blog you describes all things very well.