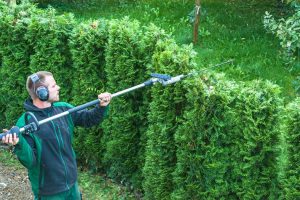 Landscaping is one of the most dangerous occupations in the United States, with higher-than-average rates of both fatal and nonfatal injuries when compared to all industries. Jobs include landscape construction, tree care services, lawn and cemetery care, right of way maintenance, seasonal property maintenance (such as snow removal), and weed control (except crop).

NIOSH established the Center for Workers’ Compensation Studies (CWCS) to use the workers’ compensation (WC) data from Ohio and other states to improve workplace safety and health. Information from the database of the Ohio Bureau of Workers’ Compensation (OHBWC) was recently studied by NIOSH and OHBWC researchers to identify common factors leading to injuries and illnesses in the landscaping services industry. A new study, “Lessons Learned from Ohio Workers’ Compensation Claims to Mitigate Hazards in the Landscaping Services Industry,” published in the American Journal of Industrial Medicine identified some well-known hazards, as well as some that are less-recognized.[i]

The number of injuries in the landscaping services industry have fallen since 2001, but the percent of injuries that are serious increased from 16% to 21% from 2001 to 2017. The most common causes of injury were overexertion and being struck by an object such as a falling tree limb or by a piece of equipment such as a lawnmower blade. Sprains and fractures were the most frequent serious injuries.

The free-text descriptions of the incidents were helpful in determining the circumstances leading to injuries or illnesses in the landscaping services industry. In the free-text descriptions of the 100 most expensive claims to the OHBWC, the words that appeared most frequently for serious injuries (and second-most in less-serious injuries) in the landscaping services industry were, “foot,” “knee,” “ankle,” “leg,” or “toe.” These descriptions included objects dropped on feet and toes; objects and equipment striking legs, feet, and ankles; slipping or feet becoming caught on an object; mower injuries; burns; overexertion injuries; feet run over by vehicles and equipment; and injuries from uneven ground, such as stepping into a hole.

The second most common keywords in serious claims were “fell” and “fall.” Many of these claims involved falls from trucks and trailers, objects falling on workers, falls from ladders or trees, slips and trips resulting in falls, and falls while mowing. Objects falling on workers in some of these claims included trees and parts of trees, tailgates, equipment, and landscaping materials. Poor footing contributed to some of the falls, such as walking on a slope, on wet grass, or on ice.

Loading Trucks and Trailers May be an Unrecognized Hazard

A surprising hazard was noted in the study—loading and unloading materials, tools, and equipment into and out of trucks and trailers. The third most common group of keywords mentioned in the free-text of serious injuries was “truck,” “trailer,” or “tailgate,” found in 22% of serious claims. Only 13% of claims mentioning these words were for roadway incidents; the majority involved injuries that occurred while working in, on, or around trucks or trailers.

The demands of landscaping work include loading and unloading trucks and trailers carrying mowers, leaf blowers, string trimmers, chain saws, live plants and trees for planting, decorative stone, wood, soil, and mulch. Incidents that occurred during loading and unloading included pinching or smashing fingers in tailgates or trailer hitches, injuries to hands or feet while hooking or unhooking trailers, falls from trucks or trailers, injuries sustained from contact with equipment and material being loaded or unloaded into or out of trucks and trailers, and tailgates falling on feet and legs. A dump truck tailgate can weigh up to 1,000 pounds and is usually designed to swing freely. Dump truck tailgates that stick can slam open or closed unexpectedly, causing serious injury.

Arborist work can involve climbing trees and working from ladders and bucket trucks to trim and cut down trees, leading to risks for falls from heights and contact with electrical wires. Of the free-text descriptions of the 100 most expensive claims, 34% mentioned one of the words, “tree,” “branch,” “wood,” “limb,” or “log,” indicating that the incidents occurred during tree work. Many of these devastating injuries were caused by falls from trees or bucket trucks, contact with power lines, trees or parts of trees falling on workers, and contact with chainsaws.

Improvement over time was noted in the rate of claims due to overexertion, especially in a reduction of claims for back sprains and disc disorders. Improved lifting techniques and the increased use of mechanized equipment may be responsible for this improvement.

Young and Newly-hired Workers are at Increased Risk

Fifty percent of serious injuries were experienced by workers 34 years of age and younger, though the median age for landscaping services workers in the U.S. was 38.1 in 2011. This may indicate that younger workers are injured more frequently than older workers. Injured workers were also highly likely to have only brief job tenure at their current job. Depending on the size of the company, 46% to 55% of all serious injuries occurred during the first year of job tenure. The percentages of all serious injuries occurring during the first 90 days of job tenure ranged from 22% to 30%, with the smallest companies having the highest percentage of these short-tenure claims. The frequency of injuries to young and early-career workers suggests that better training and supervision of new workers could be crucial to worker safety.

NIOSH promotes the “Hierarchy of Controls” to eliminate or limit exposure to occupational hazards. Where hazards cannot be eliminated, or substitutes cannot be found for the hazardous condition, engineering controls, such as safer equipment, are the next most preferable option. When engineering controls cannot be implemented, administrative controls such as improved training and procedures and personal protective equipment (PPE) can be used.

Engineering controls that can improve safety in the landscaping services industry include safety features for tailgates, liftgates, trailers and ramps such as lifting assist, remote controls, features allowing easier access, and non-slip surfaces. Safety features of tools and equipment should be left in place and should not be overridden or removed. These include interlock switches, discharge chutes and deflector shields, and guards protecting belts and chains. Applying preventive maintenance and keeping necessary components in good repair can prevent failure of tools and equipment, such as bucket trucks, ramps, mowers, chainsaws, ropes, and tailgates. This can help to avoid serious injuries.

Important subjects for worker training include identifying danger zones during tree work and how to inspect the worksite to identify hazards such as unstable trees, steep slopes, overhead power lines, holes, and obstructions. Driving safety, safe lifting, and ladder safety are also important topics. Training should also stress that a hand should never be used to clear clogs from lawnmowers, augers, and chipper/shredders.

Improved engineering controls and training can help prevent many of the injuries leading to WC claims in the landscaping services industry. Improved worker safety pays in preserving the health and livelihood of employees, avoiding the cost of claims and loss of productivity, and better worker morale.[ii]

Using workers compensation data to identify hazards and target prevention efforts is a primary role of the CWCS. Read more about the center on the website.

Barbara M. Alexander, PhD, is an Industrial Hygienist and Chemical Engineer with the NIOSH Division of Field Studies and Engineering

Steven J. Wurzelbacher, PhD, is Director of the NIOSH Center for Workers’ Compensation Studies in the NIOSH Division of Field Studies and Engineering

Rachel J. Zeiler, BA, is an ORISE Fellow with the NIOSH Division of Field Studies and Engineering

Steven J. Naber, PhD, is a Business Intelligence and Analytics Manager with the Ohio Bureau of Workers’ Compensation, Division of Safety and Hygiene.

Interesting examination of an often overlooked cohort of workers. My experience as an IH with these workers is they often experience high dust and silica exposures from ride on mowers, line trimmers and saws and blowers. Unfortunately many don’t realise the dust they generate can be harmful.

This is an interesting discussion, I do agree, increasing and improving the safety of our workers can lessen the risk (but we all know we can prevent them, at least will be able to decrease them).

Thank you for sharing this informative article about Landscaping. I hope there are a lot of landscapers who could read this and be guided.