Noise-induced hearing loss is highly prevalent in the U.S., and noise is increasingly being linked to other non-auditory health effects such as cardiovascular disease, sleep disturbance, and stress. However, our knowledge of noise exposures associated with many U.S. occupations is lacking. To address this issue, researchers used existing resources to develop a first-of-its-kind Job Exposure Matrix (JEM) for noise which allows users to estimate workplace noise exposures on a national scale.

Researchers from the University of Michigan leveraged existing noise measurement data obtained from a wide variety of regulatory and research agencies, the published literature, and industry sources to efficiently create the JEM, which contains estimates of mean time-weighted average (TWA) noise exposure levels (in A-weighted decibels, dBA) coded to standardized industry and occupation classifications, as well as estimates of the prevalence of overexposure to noise. Researchers collected 989,179 valid noise measurements representing 274 North American Industry Classification System (NAICS) and 430 Standard Occupational Classification (SOC) codes. The measurement data span nearly six decades, with the first data available from the 1960s, and the most recent data from 2015.

Results from the noise JEM were used to develop a web-based tool that allows epidemiologists, industrial hygienists, occupational health practitioners and other relevant stakeholders to access the noise exposure estimates. While individual facilities still need to be assessed for noise exposure, the JEM provides a tool that can be used to inform targeted hearing loss prevention research and intervention efforts, for benchmarking, and for efficient epidemiological exposure assessment.

What the JEM Shows 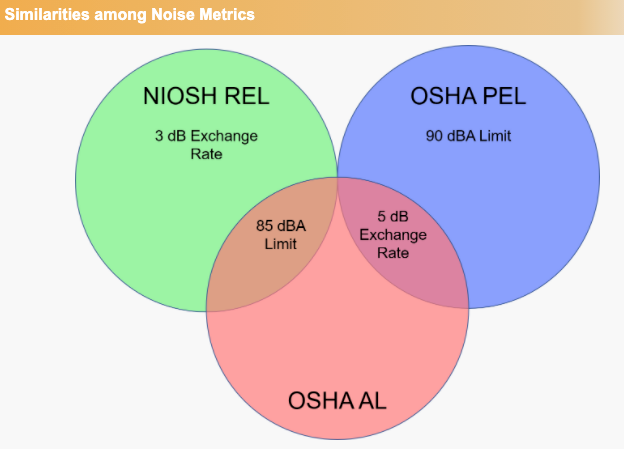 The data we collected include measurements made according to three different exposure standards, shown in the figure at right. These are: 1) the Occupational Safety and Health Administration (OSHA) 90 dBA TWA Permissible Exposure Limit (PEL); 2) the OSHA 85 dBA TWA Action Level (AL); and 3) the NIOSH 85 dBA TWA Recommended Exposure Limit (REL).

As shown in the heat map below, the JEM data indicate that average noise levels in U.S. industries generally declined from the 1960s through 2015.

While average levels have gone down, exposures to harmful noise levels are still common in many industries. For example, the average TWA noise level in the Logging industry between 2006 and 2013 was 93.6 dBA, well above the 90 dBA OSHA PEL, and 77% of measurements exceeded the OSHA PEL. Similarly, the average TWA noise level for the Road, Bridge, and Highway Construction industry during the same period was 89.7 dBA, just below the PEL, but 53% of measurements were above the PEL. The JEM can be used to identify industries and jobs where noise exposures have declined to levels at which workers’ risk of hearing loss is minimal, but also industries and jobs where additional efforts are needed to reduce exposures and hearing loss risk.

We have designed the JEM website to be easily accessible to anyone with an internet connection and a computer. First, visit http://noisejem.sph.umich.edu/, and click on the “Open the noise JEM WebApp” button: 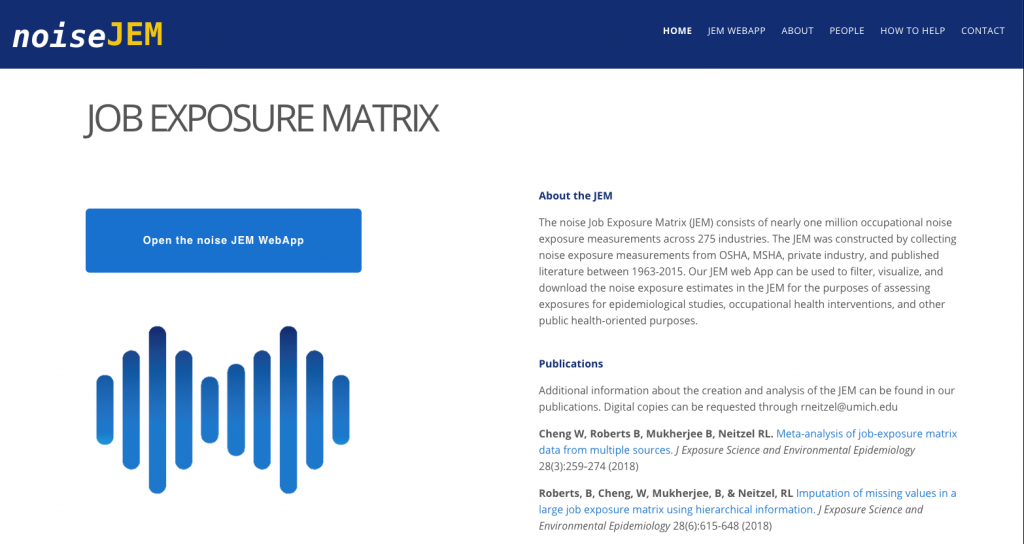 After the WebApp loads, follow the on-screen instructions to get an overview of the dataset, search for particular industries or jobs, or learn more about the definitions of terms associated with the Noise JEM:

You can also choose to download the entire dataset if you wish to do your own analyses of our data.

These results show the average noise level measured according to the OSHA PEL, OSHA AL, and NIOSH REL across the top of the screen. The results are color-coded, with green indicating levels below the relevant exposure limit, and red indicating levels above the relevant limit. Trends in the measured levels over time are displayed in the center of the screen, along with the statistical distribution of the measurements. Finally, the percentage of measurements that exceed each of the three exposure limits is shown at the bottom of the screen, with green indicating smaller percentages exceeding the relevant limit, and red indicating a larger percentage.

We encourage you to use this tool and give your feedback in the comment section below.

Rick Neitzel, PhD, CIH, is an Associate Professor of Environmental Health Sciences and Global Public Health at the University of Michigan School of Public Health.

This study was funded by grant R21OH0 10482 from the National Institute for Occupational Safety and Health (NIOSH). This blog is part of a series highlighting extramural research funded by NIOSH through the Office of Extramural Programs.

It is encouraging to see NIOSH initiating projects that are responsive to the recommendations in the NAS report “A Smarter National Surveillance System for Occupational Safety and Health in the 21st Century” available at http://nap.edu/24835. Routine publication of statistical summaries of exposure data has the potential to greatly improve occupational health protection programs. It provides a baseline of information that can be used to predict the need for controls during project planning and performance measures needed to set goals and monitor progress for continuous improvement.

However there is a semantics problem. Job exposure matrix (JEM) is a term already used to describe a method for estimating average, peak and total dose exposure metrics to individual cases and controls in epidemiology studies. Applying the same name to a different concept and metric can only create confusion. The NAS calls this “exposure surveillance” because of its similarity to public health surveillance concepts. “Surveillance” is problematic because of its many dictionary definitions. If the goal is to expand beyond noise, I would suggest switching to a dimensionless metric such as an “OEL exceedance rate” and its 90% confidence interval. Another metric could be the 95-95 UTL divided by the OEL which would be the ratio used to select hearing protection or, for chemical agents, respirator. It could be called the “risk ratio” or “protection ratio.”

The metrics will be used to support a decision logic intended to limit false negative errors of concluding unsafe conditions are safe. The null is unsafe and the alternative of safe is accepted when there is sufficient evidence. The OEL used should be current and conservatively safe to support the goal of limiting false negative decisions. Using more than one OEL will only lead to confusion.

Like your curves, box and whisker plots have the advantage of displaying the whole data set and I think would work well in this application. The plots especially useful for organizations wanting to compare their results to NIOSH baseline data for an industry or occupation.

Thank you very much for your feedback and suggestions. To clarify, the Occupational Noise JEM is not an internally-developed NIOSH product, but rather the result of externally-funded research. There are currently no plans to expand the JEM to include other hazards, and so the adoption of dimensionless metrics is not planned at this time. However, should the JEM be expanded in the future, your suggestions will be considered.

Thank you for the information that is very useful in providing a guide on How to Use the JEM Site. Warm greetings