Workplace Medical Mystery: Water Patrol Deputy Gets Sick Out on the Lake 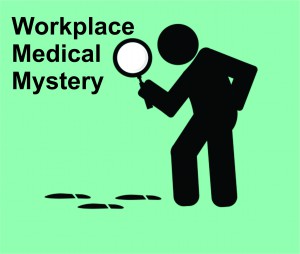 “Today’s going to be a scorcher–expect highs to reach a balmy 99 degrees!” exclaimed the voice from the radio. Jim grumbled as he listened to the weather report on his drive to work. Jim is a deputy with the county sheriff’s office assigned to the water patrol unit. Hot summer days always bring people out to the local lake, but since it is Labor Day weekend and the area is experiencing a heat wave, Jim expected the lake to be extra crowded with boats filled with families, fishermen, and revelers. Jim rolled down the window to have one last cigarette before his shift and felt a blast of hot air, and it wasn’t even 9 a.m.

Jim’s job entails enforcing various boating laws—everything from littering to drunken boating—as well as assisting with water rescues and medical calls. He typically stands on a boat in the hot sun for most of his 10-hour shift.

The morning on the lake proceeded to be uneventful. Jim mostly conducted safety checks on boats talking with kids and parents about the importance of wearing life vests. He also doled out a few warnings for speeding in no-wake zones. But by 1 p.m., things were starting to get rowdy in the channel, a shallow passageway that connects two parts of the lake. The channel can be best described as a floating party where hundreds of boats putter around slowly to the beat of blaring club music or tie up near shore where the boats are packed in next to each other like sardines in a can.

It was so hot and humid. Without even a trace of a breeze, flags hung listless on the sterns of idling boats. Jim was sweating so much he wished he could be cooling off in the water too. By 4 p.m. activities in the channel were keeping him busy. He responded to a few calls including one female who had fainted, a fight, and a minor boat collision. Jim also performed a number of field sobriety tests on boat operators he suspected may be intoxicated.

Jim noticed a haze had formed in the channel. Without any wind, the steep shoreline seemed to trap the heat and humidity. Jim still had a few hours to go before his shift was over but his head was starting to ache. Was his headache from the loud music he wondered? When he started to feel dizzy and weak he realized he had forgotten to take his high blood pressure medication in the morning. He was a little concerned, but figured he could make it a few more hours until he got home.

Jim’s partner on the patrol boat was beginning to worry about Jim. Jim was complaining of headache, dizziness, and nausea and his partner thought maybe he had not had as much water to drink as he should have given how hot and humid it was outside. When Jim began to slur his words his partner rushed him to shore where EMS personnel were stationed. Medics evaluated Jim and decided to take him to the hospital.

Tune in for the next installment of Workplace Medical Mysteries to see what Jim’s diagnosis is. Think you know? Tell us what you think it is in the comments section below.

Stephanie Stevens, MA, is a Health Communication Specialist in the NIOSH Office of the Director.

22 comments on “Workplace Medical Mystery: Water Patrol Deputy Gets Sick Out on the Lake”

High levels of carbon monoxide from the motors on the boats, lack ventilation naturally (very little to no movement of air in the channel) and the high heat reducing crosswinds contributing.

Heat stress reaching the point of brain damage. Put him over the side into the water and hydrate him. Call for EMTs.

It appears that Jim may be suffering from acute carbon monoxide toxicity. The increased boating traffic on the lake and the elevated temperature and humidity and the absence of wind may have resulted in pockets of exhaust collecting on the lake which could lead to CO poisoning.

I agree; perhaps it is a possible weather (temperature) inversion / CO situation? Although, the minor boat collision was caused by a zombie duck that snuck onto his boat and bit him. The quacking dead, I tell you…

These are classic signs of heat stroke -a medical emergency. Was his skin sweaty or dry? This is an important observation when making this assessment as heat stroke can lead to death, in my opinion.

When you hear hoof beats in the American west, don’t immediately think it’s a herd of zebras.

Sheriff deputy probably wearing full polyester uniform, maybe requires a vest as well, busy shift, lots to do, hopefully not such a brittle hypertensive that missing a dose sends him into the abyss. Should have had more water, Partner should be reacting to environmental problems like he is. He maybe drank more water.

I think we have a cooked deputy in full uniform. I hope I am thinking of horses.