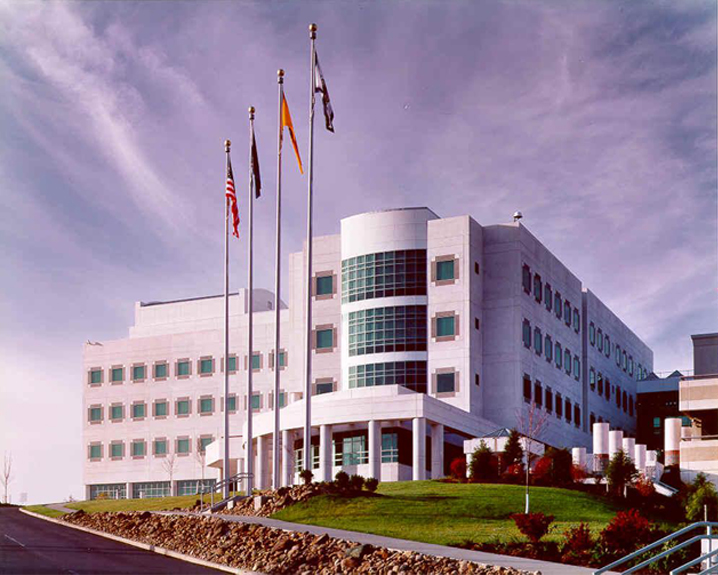 Next week marks the 20th anniversary of the opening of the L building in Morgantown, West Virginia, an addition to the existing facility which was dedicated in 1971. This state-of-the-art National Institute for Occupational Safety and Health (NIOSH) facility represents a commitment to occupational safety and health. The creation of the new building created over 200 new jobs in 1996. Today, approximately 520 NIOSH employees work in both the original and new facility, conducting research on the leading edge of science that makes American workplaces safer. A few examples of the exciting work generated by the new building over that last 20 years to improve the safety and health of workers follow.

The new building facilitated the creation of the Health Effects Laboratory Division (HELD), the NIOSH strategic leader in conducting integrated laboratory research into mechanisms of occupational disease and injury.

Thanks to specialized equipment, state-of-the-art technologies, and dedicated laboratory space afforded by the new building, HELD has advanced the understanding of the complex, often subtle changes at the minutest levels of the body that may predict risk for serious, irreversible health impairments to follow. As only one of thousands of examples, this capability has significantly increased our ability to identify how subtle changes in the capillaries in the finger associated with vibration may signal risk of later numbness and disability for hundreds of thousands of workers who routinely use vibrating power tools such as jackhammers. From this knowledge, and with findings from similarly targeted health-effects research in areas from occupational asthma to nervous-system impairment, NIOSH and partners can and have developed better ways to identify worker populations at potential risk and suggest effective, practical interventions.

The state-of-the-art facilities have also given NIOSH a head start on leading global research on occupational health concerns that have emerged since 1996, including occupational risk to health-care workers from novel strains of flu, and potential occupational risk from new technologies such as nanotechnology, for which precautionary practices should be built into commercial development.

The state-of-the-art laboratories have helped NIOSH stay competitive in the 21st Century with other world-class labs and research facilities—a necessity for recruiting bright, dedicated, motivated  scientists who will apply their talent to helping keep working men and women safe and healthy.

The opening of a new NIOSH research building and the associated establishment of HELD greatly enhanced NIOSH’s laboratory research capabilities and enabled many subsequent research collaborations between other NIOSH Divisions and HELD.

A few additional examples of other research and prevention activities made possible through the construction of the new building, or as it is often referred to as the “L Building,” include:

Falls from ladders have been a persistent hazard to workers. To better address this hazard, NIOSH developed and patented a multimodal indicator safety device to assist workers in setting up extension ladders at the proper angle for stability. NIOSH then adapted the device into an application for smartphones. The research for developing the multimodal indicator was conducted in the NIOSH Morgantown high bay laboratory in the L Building. The app also includes a graphics-oriented guide for ladder selection, positioning, inspection, and safe use. The award-winning smartphone application was released in June 2013 for both Apple and Android platforms, and is available in English and Spanish. Since its release, the app has been downloaded more than 90,000 times and has assisted workers as well as home owners in improving safety when using ladders. This app was the first NIOSH mobile phone app, a milestone for NIOSH’s entry into the era of digital app development for worker safety.

Dust-induced lung diseases such as coal worker’ pneumoconiosis (CWP), silicosis, and asbestosis continue to take a heavy toll on workers, their families, and our economy. Radiographic chest imaging is a necessary component of surveillance for identifying these conditions and for targeting prevention efforts. The International Labour Office (ILO) classification system is widely used for standardized characterization of the presence and severity of changes compatible with pneumoconiosis in plain chest radiographic images. Its use is mandated by federal law in several surveillance and compensation settings. Until late 2011, the ILO system could only be applied to film-based chest radiographs and could not be applied to modern digital chest images. Due to the widespread adoption of digital radiography in U.S. clinical settings, this restriction was making radiographic surveillance that used the ILO system, infeasible. NIOSH’s Respiratory Health Division performed research validating an approach to ILO classification of digital chest radiographs and published guidelines and regulations translating that research into the practice of medical screening and surveillance for pneumoconiosis. The Surveillance Imaging Management Systems lab, which is located in the new building, has played a critical role in this effort.

The imaging lab provides a location to review and manage digital radiographs submitted to NIOSH’s Coal Workers’ Health Surveillance Program and is also used for research, education, and B Reader certification testing of physicians’ abilities to accurately classify chest radiographs to detect cases of their work-related lung diseases as well. The NIOSH Coal Worker’s Health Surveillance Program (CWHSP ), established by the Federal Coal Mine Health and Safety Act of 1969, has been in operation since 1970. For most of its history, CWHSP offered participating underground coal miners medical testing including chest radiographs and occupational history questionnaires. The testing has provided a means of surveillance that has documented continuing problems with coal workers’ pneumoconiosis (CWP), more commonly known as black lung disease. This, in turn, has motivated intensive new efforts to eliminate the disease, including new Mine Safety and Health Administration regulations to better control exposures. The new regulations have also expanded health surveillance to surface miners and added lung function testing with a test called spirometry that can be used to detect COPD. The new building has facilitated NIOSH efforts by serving as a centralized hub for activities related to CWSHP operations, contributing to this important program’s success

The L Building also enabled NIOSH’s respirator testing and certification program, now part of the NIOSH National Personal Protective Technology Laboratory, to significantly improve its evaluation of air-purifying respirator performance. Before the L Building, in limited lab space, NIOSH researchers measured the performance of such respirators by placing a device inside a test chamber and determining the amount of a test contaminant going through the respirator filter. That system allowed researchers to determine how well the respirator filter reduced a user’s exposure to an airborne contaminant. However, it didn’t allow for evaluation of another critical factor in respirator performance – the fit of the face mask against the user’s face in a working environment.  A tight seal against the user’s face can be lost if the user speaks, yawns, or otherwise moves his face. With the addition of new test chambers in the L Building, researchers were able for the first time to study face fit by simulating actual workplace environments. Inside the test chambers, volunteer subjects are exposed to harmless air contaminants such as corn oil aerosol while wearing air-purifying respirators, and instructed to smile, speak, or yawn as someone might normally do while wearing a respirator on the job. Concentrations of the harmless contaminant inside and outside the masks are measured and compared. With the additional space, too, researchers are now able to conduct more than one test simultaneously, expediting study results. The tests enabled by the expanded, specialized lab space in the L Building are part of NIOSH’s ongoing research to develop better technical criteria for respirator face-mask fit.

The L building’s state-of-the-art facilities have greatly enhanced NIOSH’s ability to protect American workers. We look forward to updating you on the next 20 years’ accomplishments.

Tanya Headley, MS, is a health communication specialist in the NIOSH Communications Office.