Improving the Safety and Health of Bison Handlers 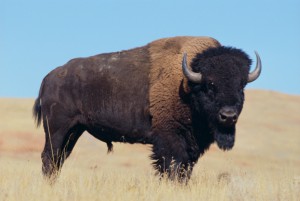 Recent media reports of bison injuring visitors at Yellowstone National Park have raised public awareness of the hazards of interacting with bison. Those who work with these animals face unique risks. Bison are the largest land mammals in North America, weighing in at about 1,000-2,000 pounds.1 They can run 35 miles per hour and pivot quickly.1 They have not been bred for docility like livestock and are known to attack humans if provoked. These and other factors make working with bison hazardous.

It is widely recognized that agriculture is one of the most hazardous industries in the United States, with a reported fatality rate of 22.2 deaths per 100,000 workers in 2013 and approximately 150 hired agricultural workers suffering from a lost-work-time injury daily.,2,3,4,5 Within agriculture, livestock-handling is particularly dangerous. Several studies indicate that having livestock doubles the risk of injuries compared to those who have no livestock. Livestock-handling injuries are also among the most severe of all agricultural injuries.6,7

Bison, while similar in some ways to cattle, are not included in the term “livestock.” As the bison industry grows with the demand for bison meat, more workers will be exposed to close contact with these animals. The steady increase in bison production and the subsequent increase in the number of bison handlers make this an emerging occupational safety and health concern. Raising bison in the semi-arid central region is an attractive alternative to typical agricultural enterprises. Currently, 200,000 bison are found on 4,500 ranches in the US and an additional 200,000 bison in Canadian herds. American Indian tribal herds account for 15,000 bison with the balance found on public lands.8

After working for many years to improve the health of bison in American Indian herds, we recognized the need for improvements in the working environment and safety training for those working with bison. We designed a pilot project which built on established working relationships with the University of Nebraska-Lincoln (UNL) and the Intertribal Buffalo Council (ITBC). The ITBC has a membership of 58 tribes in 19 states with a collective herd of over 15,000 bison. The ITBC is committed to re-establishing buffalo herds on the Indian lands in a manner that promotes cultural enhancement, spiritual revitalization, ecological restoration and economic development. The knowledge derived from the Best Practices for Range Bison Herds project will assist bison producers, both tribal and non­tribal, in formulating and implementing best management practices that will improve the health and safety of workers when handling bison.

This pilot project documents commonly encountered hazards associated with herding bison on American Indian reservations in the central states. Workers in many of these newly established bison herds have not received formal training and may have limited animal handling experience, making this a workforce that is vulnerable to injury and fatalities. Handling practices of tribal herds are in many respects similar to non-tribal herds, therefore the findings from this study will be applicable to a broad range of bison handlers. Because of the marked differences between cattle and bison handling, even experienced cattle handlers will benefit from a guide on best practices in bison handling. The working hypothesis for this pilot project is that worker safety risks exist when bison are handled on tribal property, and that these safety risks may be mitigated by employing best practices. Specifically, this project aims to: 1) Characterize hazards and risks to worker health and safety while handling bison under contemporary reservation field conditions, 2) Implement intervention strategies to mitigate worker safety risks by providing best practices for range bison herds, and 3) Assess the outcomes and evaluate the impact of intervention strategies.

What has been done so far?

To date, the project researchers have conducted 16 observational safety audits. Free range tribal bison herd managers also completed worker safety and health questionnaires. Preliminary findings indicate that the most common worker safety risks are associated with the use of high stress handling methods and substandard facilities and equipment. Adverse environmental conditions also contribute to worker safety risks. Results from the audits were used to inform the training of bison herd managers and handlers during the newly initiated Bison Handling/Safety Training conducted by the ITBC in Taos New Mexico March 24 – 25, 2015. Workshop participants from New Mexico and surrounding states discussed herd and worker safety, corral and pasture handling facilities and low stress handling techniques. Veterinarians and herd managers who have assisted in free range bison herding will complete an additional survey in August 2015. The findings from this survey will be incorporated into the best practices guide.

Looking to the future

Great strides have been made in understanding the hazards faced by bison workers in the first nine months of this 18 month long pilot project. Additional data will further enhance knowledge regarding the safety and health needs of bison handlers, and how to best address these needs. This pilot project will result in the publication of a best practices guide for range bison managers and a tailgate training intervention designed to educate bison handlers. Upon completion of the project these resources will be made available, free of charge, to bison handlers, managers and the public on the Central States Center for Agricultural Safety and Health (CS-CASH) website.

Clayton Kelling is with the University of Nebraska Lincoln, Nebraska Center for Virology.

One comment on “Improving the Safety and Health of Bison Handlers”

This pilot project needs a revision because American Indian reservations need a deep study to do the project. Paraguay have a good experiencie with this type of animals, where bisons have a natural home.