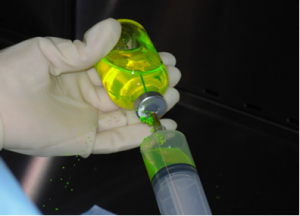 May is National Oncology Nursing Month.  In honor of these nurses and all who work with hazardous drugs (many of which are used in the treatment of cancer) we are posting this blog on how to safely prepare, administer or otherwise handle these drugs.

About 8 million U.S. healthcare workers are potentially exposed to hazardous drugs.  Inhalation and skin contact or absorption are the most likely routes of exposure.   However, unintentional ingestion from hand to mouth contact and unintentional injection through a needle-stick or sharps injury are also possible.  Hazardous drugs can include those used for cancer therapy, some antiviral drugs, hormone agents, and bioengineered drugs. Workers at risk include:

Despite the prevention efforts to date, workplace contamination has been well documented by research on a small percentage of antineoplastic, or cancer-killing drugs.  While the majority of drugs have not been studied, similar contamination would be expected.  There is also evidence of worker exposure based on measurable amounts of the drugs in the urine of the healthcare workers studied. Finally, research shows a significant increase in biomarkers of exposure in healthcare workers when compared to unexposed workers.

Published studies have shown that workplace exposures to hazardous drugs can cause both acute and chronic health effects such as skin rashes, adverse reproductive outcomes (including infertility, spontaneous abortions, and congenital malformations), and possibly leukemia and other cancers. The health risk depends on how much exposure a worker has to these drugs and how toxic they are.

Reproductive health is one of the most vulnerable end points because many hazardous drugs used for cancer treatment target rapidly dividing cells in the same way teratogens target rapidly dividing embryonic cells. Laboratory studies have demonstrated that many chemotherapeutic drugs are teratogenic (can interfere with the development of a fetus), often in more than one animal species. Some classes of drugs are more hazardous than others and, as a group, antineoplastic  drugs have been shown in animal studies to be some of the most potent teratogenic agents known, at doses typically used in cancer treatment.

To address these and other reproductive issues, NIOSH is developing a Guidance Document on Reproductive Health Issues in Healthcare Workers Exposed to Hazardous Drugs. The document is currently undergoing external review by experts in the field.

A complete list of prevention recommendations can be found in the Alert on Hazardous Drugs including detailed recommendation for receiving, storage, preparation and administration of hazardous drugs.  Exposure risks can be greatly reduced by (1) making sure that engineering controls such as a ventilated cabinet are used and (2) using proper procedures and protective equipment for handling hazardous drugs.  However, while new advances in engineering controls and facility design help to protect workers who mix or compound hazardous drugs, there is not similar protection available for nursing personnel who administer these drugs to patients.  Closed system drug transfer devices (CSTDs), which are a type of engineering control, can provide an additional level of protection for both pharmacy and nursing personnel.  Additional protection is available by using the proper types of PPE and following strict work practices when administering the drugs.  When I.V. lines are primed in the pharmacy or primed with a non-drug solution, the potential for exposure of nursing personnel to these drugs is reduced.

Update to the NIOSH Alert on Antineoplastic and Other Hazardous Drugs

Since the release of the NIOSH Alert on Hazardous Drugs in 2004, nearly 300 papers have been published on hazardous drugs and several new advancements such as CSTDs  and robotic systems have come on the market.  In addition, there are numerous new drugs that have been approved for cancer treatment.  The Alert is in the process of being updated to address this new information. When finalized, the Alert will be available on the NIOSH Hazardous Drugs Topic Page.

NIOSH has been updating its list of hazardous drugs every two years based on new FDA drug approvals and new warnings on existing drugs.  The most recent update was in 2012.  The list will be updated in the summer of 2014 and will have a new format.  It will be divided into three groups.  Group 1 will be Antineoplastic Drugs, those drugs identified by ASHP/AHFS as drugs used for the treatment of cancer.  Group 2 will be Non-antineoplastic Drugs which are drugs that meet the NIOSH criteria for a hazardous drug and are used for diseases other than cancer.  This group will include some drugs that have secondary reproductive toxicity.  Group 3 will include those drugs that are primarily Reproductive Hazards. NIOSH will also provide guidance on personal protective equipment and engineering controls for various scenarios that may be encountered when handling hazardous drugs.

In addition to the NIOSH resources mentioned above, the American Society of Health-System Pharmacists (ASHP) and the Oncology Nursing Society (ONS) have published safe handling recommendations to protect healthcare workers from exposure to hazardous drugs since the 1980s.  An important new development related to the safe handling of hazardous drugs is the new U.S. Pharmacopeial Convention (USP) Chapter, Hazardous Drugs-Handling in Healthcare Settings, which is currently out for public comment.  Chapter <800> will supersede the hazardous drug section in USP Chapter <797>.  Comments will be accepted until July 31, 2014 at http://www.usp.org/usp-nf/notices/compounding-notice.

With Washington State and California already having legislation focused on the safe handling of hazardous drugs, other states are following close behind with their own legislation.  As NIOSH and other organizations move forward on activities aimed at protecting workers from hazardous drugs, healthcare workers everywhere will benefit from safer working conditions in their endeavors to treat seriously ill patients with an ever-expanding armament of drugs.

Dr. Connor is a Research Biologist in the NIOSH Division of Applied Research and Technology.

Thank you for splitting up the hazardous drugs into those 3 groups! The update cannot come soon enough.

We have compiled and summarized the best evidence on how to prevent needlestick injuries. The first option is to use special gloves or more than one layer of gloves (http://onlinelibrary.wiley.com/doi/10.1002/14651858.CD009573.pub2/abstract). There is moderate-quality evidence that double gloving compared to single gloving during surgery reduces perforations and blood stains on the skin, indicating a decrease in percutaneous exposure incidents. There is low-quality evidence that triple gloving and the use of special gloves can further reduce the risk of glove perforations compared to double gloving with normal material gloves.
The second option is to use safety devices (http://onlinelibrary.wiley.com/doi/10.1002/14651858.CD009740.pub2/abstract). However, the evidence oon their effectiveness is very iffy. For safe blood collection systems, we found very low quality evidence in one study that these decrease needlestick injuries (NSIs). For intravenous systems, we found very low quality evidence that they result in a decrease of NSI compared with usual devices but moderate quality evidence that they increase contamination with blood. For other safe injection needles, the introduction of multiple safety devices or the introduction of sharps containers the evidence was inconsistent or there was no clear evidence of a benefit. The third option is to use blunt needles vs. sharp ones but that only applies to suturing (http://onlinelibrary.wiley.com/doi/10.1002/14651858.CD009170.pub2/abstract). The fourth and final option is education and training. If you want to participate on a systematic review to find out its effectiveness, let me know.

I continually sing the praises of NIOSH for their continued efforts to protect healthcare providers.

Within the revision of the HD document can you please elaborate on the following gaps:
-Ampule management best practices
-Biological Hazards (BCG) management
-Nanotechnology hazards with drug utilizing this technology
-Detailed cleaning/decon process, not generalizations. This is an expert document and I look to it for the ‘how to’.
-How are we to clean our HD rooms, the same as directed by USP 797 or do we need to do something different.
-Listing of ‘volatile drugs’ for us to use.
-continuous rating tool for new formulary candidates that are approved in between revisions of the Appendix A
-Handling of research drugs with limited or no safety information
-A gap tool for the entire process.

Thank you once again for all your efforts and work on this pinnacle document in healthcare provider safety.

One important source of such drug hazard is urine of patient injected with radioactive drugs, mostly in cancer patients.Radioactive element can remain in the toilet tubs quiet long, exposing later users.This mode of hazzard frequently goes unnoticed in hospitals and in homes of such patients.http://www.edoubts.com/questions/can-urine-of-patient-injected-with-radioactive-cancer-drug-be-source-of-radiation-hazard-to-paramedics-or-relatives-/?edr363#.U6hVinKSzQA

Thank you for your comment. Under some circumstances and therapies, some radiation dose can occur to medical staff from the urine of patients treated with radionuclides, particularly in the case of iodine-131 therapy. NIOSH does not currently list any radio-pharmaceuticals on the NIOSH List of Hazardous Drugs. At one time, NIOSH listed some radio-pharmaceuticals. At the request of the American Pharmaceutical Association we removed the drugs from our list because they are regulated by another agency.

A problem in healthcare are the terms “drug” and “medicine” as this prevents their ready recognition as “chemical hazards” particularly as they are designed to have health effects on humans. Additionally healthcare workers are often not trained in methods of glove removal and tend to contaminate themselves from their PPE. The healthcare approach tends to focus on the prevention of infection transmission which is not always complementary to chemical hazard control.

Thanks, Tom, for your ongoing attention to this issue. I look forward to the new list, and thank you for the support and information that you have always provided in this area. We still have a lot to tackle here, and I appreciate the new approach.

Thank you Dr.Connor for this excellent post and updated list. Looking forward for the “Guidance document.”
Mike

Thank you Dr. Connor for your ongoing attention to this issue. I look forward to the new list, and thank you for the support and information that you have always provided in this area.

hazardous drugs are really dangerous for those who are always exposed to them. As you said here these unintentional contacts can lead to serious diseases such as cancer and others. I think this post is really an antidote for those people. I also want to know if there is a list for the recent hazardous drugs?
thymosin b4

In addition to the NIOSH resources mentioned above, the American Society of Health-System Pharmacists (ASHPExternal Web Site Icon) and the Oncology Nursing Society (ONS)External Web Site Icon have published safe handling recommendations to protect healthcare workers from exposure to hazardous drugs since the 1980s. The government really did well in protecting citizens from hazardous drugs. However, it’s far more difficult at present because of the rapid development of drugs development.

Part of the NIOSH 2014 document states that pharmacies need to comply with DOT shipping
Requirements. Finding information regarding these requirements to present to pharmacy managers is a difficult task. Any assistance would be much appreciated. Rob in California.