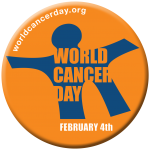 Today is World Cancer Day. Around the world, 12.7 million people are diagnosed with cancer every year, and the number is expected to increase due to the growth and aging of the population, as well as reductions in childhood mortality and deaths from infectious diseases in developing countries (ACS 2011). Cancer is the leading cause of death in developed countries and the second leading cause of death in developing countries.

Cancer is a group of diseases characterized by uncontrolled growth and spread of abnormal cells. If the spread is not controlled, it can result in death.

It has been estimated that 3-6% of all cancers worldwide are caused by exposures to carcinogens in the workplace (Driscoll et al. 2005; Rushton et al. 2012). Based on cancer incidence numbers in the U.S. (CDC 2014), this means that in 2010 (the most recent year available), there were between 43,695 and 87,390 new cancer cases that were caused by past exposure in the workplace. Worldwide, this translates to between 381,000 and 762,000 new cancers each year caused by occupational exposure. This is probably an under-estimate, partly because we don’t yet know about all of the agents in the workplace that may cause cancer. Cancers that occur as a result of exposures in the workplace are preventable, if exposures to known or suspected carcinogens can be reduced.

At NIOSH, we are conducting studies to identify physical and chemical agents in the workplace associated with the development of cancer. One way we do this is by carrying out epidemiologic studies among working populations to determine which workplace exposures might be linked to cancer.

Since 2012, NIOSH investigators have published findings from 24 studies of workplace-related cancer (see full list here). These studies have evaluated the risk of cancer from a wide variety of physical and chemical agents. Studies have included:

While too numerous to describe in detail in this blog, some of the key findings of these recently published studies include:

NIOSH’s occupational cancer research program has had a large impact on the national and international evaluation of the carcinogenicity of chemical and physical agents. The program has also influenced the development of risk-based exposure limit recommendations by NIOSH, OSHA, and other national and international organizations. We anticipate that findings from ongoing studies in the program will continue to be influential in these realms, and will remain an important tool for global cancer prevention into the future.

In 2009, IARC, the American Cancer Society, and NIOSH (through the National Occupational Research Agenda) convened an expert group of scientists to develop research recommendations to further evaluate the carcinogenicity of 20 potential carcinogens (IARC 2009; Ward et al. 2010). We are interested in your input on priorities for future epidemiologic research of potential occupational carcinogens!

One last thought: In addition to the cancer epidemiology program, NIOSH has a broad range of other work going on related to preventing occupational cancer – look for summaries of some of this other work in future blogs.

Drs. Schubauer-Berigan, Carreόn-Valencia, Ruder, and Pinkerton are research epidemiologists in the NIOSH Division of Surveillance, Hazard Evaluations and Field studies.

8 comments on “World Cancer Day – Cancer Detectives in the Workplace”

Translated by Edgar Reyes – NIOSH
RED MEAT CONSUMPTION IN PARTICULAR FROM ARGENTINA AND URUGUAY, AS WELL AS, COOKING OF SUCH THROUGH PARRILADAS (BARBECUE) WHERE THE WOOD BURNS AND DETACHES EMBER, THE CONSUMPTION OF FISH THAT IS NOT FRESH, CONTAINS MERCURY WHICH IN TURN IS TRANSFORMED INTO METHYL MERCURY AND THE USE OF ASPARTAME (ASSOCIATION OF METHANOL, ASPARTIC ACID AND PHENYLALANINE) AS WELL AS DISPOSABLE PLASTIC CONTAINERS WITH BISPHENOL AND DIOXINS ARE ALSO CONTRIBUTING ELEMENTS, IN MY OPINION. THANK YOU.

Thank you.
i’m fan of this blog

Nice posts and great information about World Cancer Day.. Thanks to share

Please quit smoking and be healthy.. 😉

Thanks for your great information, the contents are quiet interesting.I will be waiting for your next post.

hope they can fine the cure !

This article is a fantastic read! Many are not aware of the environmental hazards associated with some career paths.