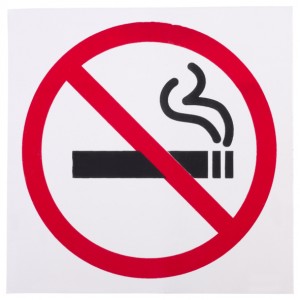 What better time than during the American Cancer Society’s  annual Great American Smokeout, to highlight the benefit of  comprehensive smoke-free workplaces  on the health of workers.   Furnishing a smoke-free work environment has been shown to both reduce exposure to environmental tobacco smoke (ETS) among non-smokers, and also to decrease smoking among employees.  In Massachusetts, recent surveillance findings suggest that one approach to reaching that goal – comprehensive state laws mandating smoke-free workplaces – had a measurable positive impact.

The U.S. Surgeon General reports that there is no safe level of exposure to ETS, also known as secondhand smoke (USDHHS 2006).  Workers can be exposed to ETS in their workplaces if co-workers or members of the public are permitted to smoke.   ETS causes lung cancer and heart disease, and is also linked to respiratory diseases. Not only does ETS worsen asthma but it also increases the likelihood of developing asthma.

In 2004, Massachusetts became the third state behind Delaware and New York to pass a comprehensive law, banning smoking in bars, restaurants and non-hospitality workplaces.  The Massachusetts Smoke-Free Workplace Law (M.G.L. Ch. 270, § 22) requires all enclosed workplaces with one or more employees to be smoke-free.

We recently presented findings from the Behavioral Risk Factor Surveillance System demonstrating that since the 2004 ban in Massachusetts, the prevalence of ETS exposure at work among non-smokers  declined from 8% in 2003 (the year before the ban was passed) to 5.4% in 2010.  At the same time, smoking among workers declined from 18.5% in 2004 to 12.7% in 2010. And while smoking prevalence had been declining before the law was passed, the drop was steeper after it went into effect.  These findings suggest that comprehensive smoking bans work, but our results also indicate that there is more work to be done.

The Massachusetts 2004 law may not be as effective among these three occupation groups, either because it does not cover or is not enforced in settings where they work.  For example, outdoor non-enclosed workplaces and private residences are not covered and it may be difficult to enforce the ban in work vehicles.

However, we can work to overcome these challenges.  Local jurisdictions can pass stricter policies for outside spaces and increase enforcement. For example, the Boston Public Health Commission’s 2008 regulations prohibit smoking in outdoor workspaces that are adjacent to indoor workspaces, such as restaurant and hotel patios, loading docks, valet parking areas, and unenclosed floors of construction sites. Several city housing authorities, including Boston and Springfield, have banned smoking in public housing, and similar policies are being considered across the state.  Employers should inform employees of the law and ensure that ‘no smoking’ signs are clearly posted, as required.

We hope that other states can learn from the Massachusetts experience and protect their workers from ETS in the workplace.

Ms. Fitzsimmons is an Epidemiologist in the Massachusetts Department of Public Health

Hello!! I agree with you and It’s amazing that our Government spends millions each year advertising that we should all stop smoking and yet they ban the most successful aide ever.
Thanks for sharing a wonderful Knowledge i really like it.

Can all cigar companies provide smoke helmet so that every smokers blowing inside it will inhale all the cigarettes smoke without spreading outside? In this way also smokers will not waste any amount of smoke away. They can have all the smoke they’ve been paying for!

Thanks for this information
and sharing