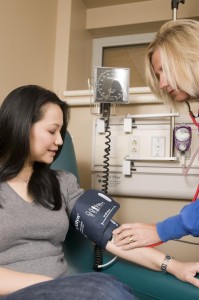 If workers earning low wages didn’t have enough stressors in their lives, they can now add hypertension to the list.  Our new research finds that low wages are a risk factor for hypertension among working people.  The research was recently published in the European Journal of Public Health, “Are Low Wages Risk Factors for Hypertension?”, and was partially funded by NIOSH.

Whereas low Socio-economic status (SES) has been linked to hypertension, the reasons why are unclear.  This is the first study to examine wages, the largest component of income (one part of SES), as a risk factor for hypertension.  Why is this important?  Wages are an indicator of job quality and may be linked to feelings of self worth.  Low wages can also create financial stress for families that find themselves short of funds to pay for rent, electricity, heat, and gas for their cars.  Additionally, there are steps policy makers can take to adjust wages.   For example, governments can raise minimum wages, make it easier for unions to organize,  and increase  the pay of low-wage government workers.

Reducing hypertension could have a significant impact on the health of Americans and the associated costs to deal with the condition.  Hypertension, or high blood pressure, was listed as a primary or contributing cause of death for about 348,000 Americans in 2008.[i]  Hypertension raises the risk for heart disease and stroke and affects about 1 in 3 U.S. adults— an estimated 68 million people.[ii]  Costs directly attributable to high blood pressure for the nation total almost $131 billion annually in direct medical expenses and $25 billion in lost productivity.[iii]

We used records from the Panel Study of Income Dynamics, a highly regarded database that includes information on employment, income, and hypertension status.  The study included longitudinal, nationally representative U.S. data from four time periods (1999, 2001, 2003 and 2005). The sample was limited to 5,651 employed participants aged 25 to 65 years with a wage of $2.78 to $77 (1999 dollars) an hour.   Hypertension was self-reported based on physician diagnosis.

If additional research using different national data sets finds the same relationship between low wages and hypertension we could have identified a way to help reduce the costs and personal impact of a major health crisis.  We encourage researchers to conduct additional studies to further this area of research.

Dr. Leigh is the lead author of this study and a professor in the Department of Public Health Sciences and Center for Healthcare Policy and Research at the  University of California Davis School of Medicine.

Dr.  Du is co-author and a professor of economics at Old Dominion University, Norfolk, Virginia.

10 comments on “Hypertension and Low Wages”

Lutadores ganhando menos têm maior risco de hipertensão do que aqueles que ganham mais no final do mês. A partir de qualquer idade laboriosa, os desejos entre salários e hipertensão são fortes entre as mulheres e os homens (para as donas de casa que controlam as necessidades do lar); variando as idades de 20 a “n” idade. Isto principalmente em países de baixas rendas familiares.
Depois, toda sobrecarga onde influa a necessidade de imediatamente ter o respaldo para uma emergência, abala o emocional; isto acontecendo a hipertenção também se abala.
Fighters earning less have greater risk of hipertensão of what those that earn more at the end of the month. From any laborious age, the desires between wages and hipertensão are strong between the women and the men (for the house owners who control the necessities of the home); varying the ages of 20 the “n” age. This mainly in countries of familiar low incomes. Later, all overload where it influences the necessity immediately to have the endorsement for an emergency, shakes the emotional one; this happening the hipertenção also is shaken.

As you get older I think it is very important to take account of blood pressure. I discovered that my blood pressure was increasing and took steps to addresses this. I got it under control through a number of measures including taking garlic and increasing exercise.

The exercise was aimed at increasing circulation. I bought a blood pressure monitor and paid attention to it. I tried not to loose my temper and took a few minutes each day to do nothing but relax and this can be done anywhere that you can be still and is about paying attention to how you feel and stopping your mind by relaxing your body.

thanka you.. its nice post….As you get older I think it is very important to take account of blood pressure. I discovered that my blood pressure was increasing and took steps to addresses this. I got it under control through a number of measures including taking garlic and increasing exercise.

If you are in a constant state of worry about being able to pay your bills, your blood pressure is bound to go up.

Nice post, Hypertension is really a dangerous because it couses of Congestive heart failure, heart attack, Ischemic heart disease, Antheothrombotic stroke, and sudden death. one-third of men and two-fifth of women over 40 years of are hypertensive because as age advances, there is pari-passu increase in Blood pressure.

Love this! Thank you for sharing!