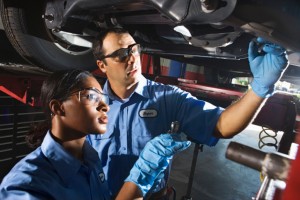 U.S. businesses of the new millennium are starting smaller and staying smaller than in decades past. That’s the conclusion of a study reported in the March issue of Monthly Labor Review.

The study found that business size, as measured by number of employees, usually declines during economic recessions and increases during expansion years resulting in an overall upward trend. However, unlike previous decades, that trend did not persist during the 2000s when overall size declined slightly. That shift was mostly explained by a decrease in “birth size” of businesses. For example, between 2000 and 2007, the average size of establishments that were less than one year old declined from 7.3 to 5.3 employees while the size of establishments that were seven or more years old showed a much smaller decline from 22.8 to 22.2.

The authors of the study speculate that this smaller and persistent establishment birth size may be a sign “that new establishments are entering the economy with new modes of production that place a greater emphasis on technology and a lesser emphasis on labor.”1

Other pertinent research questions include:

Next week, May 20-26, 2012, is National Small Business Week.3 As small businesses gather in Washington to celebrate their successes and discuss their challenges, it is an opportune time to think about how to protect their workers. If you have experience working with a new and small business on health and safety issues, we would welcome your perspective on important issues to consider as new businesses start and stay smaller.

Dr. Sinclair is the Coordinator of the NIOSH Small Business Assistance and Outreach Program.

I believe that nowadays more and more business goes online, I’ve personally launched a website and agree that society should understand the difficulties conneted with small business launching.

“Are new establishments with fewer employees likely to experience higher levels of occupational stress than those with more employees?”

I would say the answer to this is likely no. It seems highly likely that small businesses are hiring less people due to the way technology has greatly streamlined so many arduous tasks. If this is the case, there are less tasks to do, so the few employees wouldn’t experience any additional stress.

This only makes sense that in a prolonged recession that businesses would start out smaller and stay smaller. Not as many resources to draw from. Also, as more and more business look to the internet there will be a great shift to the online business. We recently moved from a brick and mortar business to a 100% online business. We had to downsize from 5 employees to 2. It’s a tough thing, but it is starting to show benefits.

Recession has slower down the pace for buying a business in Ireland and in US and rest of the world. But now the countries are recovering from the loss and are trying to make the business better and their economy better.

i dont know what is like in US but almost all small businesses have gone now, just supermarkets and internet sites seem to be really growing

It’s pretty interesting that, although widely accepted, the notion of small business driving our economy doesn’t seem to be a concern for the actual owner. Hence them being willing to stay small. More and more small business owners are chasing their passion or making their hobbies full time jobs. This presents unique marketing challenges in and of itself. How to market if you don’t REALLY want to grow? It’s a tricky situation. Great read btw.

I am glad to see that people are actually writing about this issue in such a smart way, showing us all different sides to it. You are a great blogger. Please keep it up. I cant wait to read whats next.

I think this is also true within the UK as i run a small business which is manageable. The problem is not growing as this is impossible as your customer base expands.