Respiratory Protection for Terrorist Threats and Other Emergencies 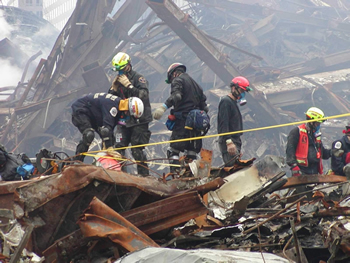 This September 11th marks eight years since the devastating attacks on the World Trade Center. At this time we honor those who gave their lives and those who risked their lives and their health in rescue and clean-up efforts. NIOSH played an important role in addressing workers’ needs in the aftermath of the attacks. A summary of the efforts can be found on the NIOSH World Trade Center topic page. While our work, specifically with respirator certification, prepared us well to assist the responders, many areas for improvement were highlighted during the response and subsequent interviews with responders. NIOSH continues to work to ensure that responders are protected when dealing with all emergencies. This blog highlights the advancements made in respiratory protection for workers in the event of chemical, biological, radiological, and nuclear (CBRN) emergencies.

NIOSH research into the specific needs of responders to terrorist events began with the co-sponsoring of the Chemical and Biological Respiratory Protection Workshop with the Department of Defense (DOD) and the Occupational Safety and Health Administration (OSHA) in March 1999. Following the World Trade Center attack, NIOSH partnered with its stakeholders and RAND to assess the range of areas, including respiratory protection, in which advancements to protect responders were needed. Findings and recommendations from that assessment are published in four NIOSH/RAND reports:

Since then, NIOSH has developed a systematic approach to identify the hazards that responders would face, assess the capabilities of existing respiratory protection equipment to provide protection against viable threats using benchmark testing, and set certification standards that stretch the capabilities of the protective technologies to enhance the protection offered to responders during CBRN events. The standards development and respirator certification programs conducted at the NIOSH National Personal Protective Technology Laboratory (NPPTL) have led to an increase in the national inventory of NIOSH-approved respirators with CBRN protection capabilities.

Under the Occupational Safety and Health Act and the Mine Safety and Health Act, NIOSH has tested and certified respirators for more than three decades to protect workers from harmful airborne contaminants. In traditional work settings such as factories and mines, respirators are used as one component of a strategic program to protect workers from a known hazard. The challenge of protecting emergency responders is quite different in a scenario in which the hazards from a potential terrorist attack may not be known, especially at the outset. What toxic chemical, biological, or radioactive contaminants may have been released in the attack, and at what concentrations?

The assessment of the type and magnitude of the respiratory threats potentially faced by responders of a terrorist event led to the establishment of eleven Test Representative Agents (TRAs) and test concentrations that NIOSH uses in benchmark testing to assess present technologies’ ability to protect responders from likely threats. NIOSH benchmark testing, conducted prior to the attacks of 9/11, demonstrated that neither industrial nor military respirators provided protection against the full range of known or projected CBRN terrorist threats.

The development and implementation of standard test procedures since then, along with minimum requirements for the construction and performance of respirators, has enabled NIOSH to establish approval criteria for respiratory protection equipment that will withstand the anticipated threats of a terrorist event during response and recovery activities. In response to responders’ requests for assurance of performance, these criteria include performance tests against chemical warfare agents (Live Agent Testing) conducted by U.S. Army test laboratories, to verify that respirators will provide needed protection against those chemical threats.

Since December 2001, NIOSH has established approval criteria and approved respiratory protection equipment for five types of respirators that provide protection against CBRN agents. NIOSH has issued 91 approvals for the various respirator types for which approval standards have been implemented. These approved products include:

Based on concerns raised by the International Association of Fire Fighters (IAFF), the National Fire Protection Association (NFPA), and the International Association of Fire Chiefs (IAFC), NIOSH, along with its standards development partners, the U.S. Army Soldier and Biological Chemical Command (now known as Edgewood Chemical Biological Center) and the National Institute of Standards and Technology (NIST), determined that the open-circuit, pressure demand/positive pressure Self Contained Breathing Apparatus (SCBA) would receive first priority for CBRN terrorism agent protection. Reflecting the stakeholders’ concerns, NIOSH decided to give this type of respirator first priority because it is used where the respiratory threat level is unknown or known to be immediately dangerous to life and health (IDLH). NIOSH’s approval for CBRN protection is referenced in the National Fire Protection Association (NFPA) 1981 Standard, Open Circuit SCBA for Emergency Services (2007 edition). In order to meet this current edition of the NFPA standard, all new SCBA must be CBRN-certified by NIOSH. The coordination with NFPA has resulted in enhanced collaboration between NIOSH and the certification bodies for issuance of the certification to NFPA 1981 requirements. U.S. fire departments purchase and use SCBA certified to meet the NFPA 1981 standard, thereby providing responders in those organizations with this added level of protection. on new units purchased since 2008.

The second CBRN standard to be developed was for full-facepiece, air-purifying respirators (APR). The CBRN APR full-facepiece respirator is widely used by multiple responder groups. It provides a lower level of protection than the SCBA and its use is generally allowed once conditions are understood and exposures are determined to be at levels below those considered to be IDLH.

In response to stakeholder feedback, interoperability among air purifying elements and communications testing in the form of a speech intelligibility test, performed while wearing a respirator, have been incorporated into the respirator performance standards. The speech intelligibility test has been incorporated into the approval criteria for the subsequently-announced respirator types as well. NIOSH responded to the need for interoperability among air purifying elements for APRs by specifying certain construction and performance parameters that enable the interoperability of gas and vapor-removing air-purifying elements (canisters) with facepiece components from different manufacturers. Parameters including canister size, weight, airflow resistance, capacity for gas and vapor absorption, connection-to-facepiece dimensions, and position-on-the-facepiece dimensions had to be specified to enable the safe interchange of components between various manufacturers. Although the NIOSH approval does not allow intermixing of different manufacturers’ CBRN canisters and facepieces, these controls enable incident commanders to allow limited interchange of components at the time of supply shortages during an emergency response.

The third priority for CBRN standards was the air-purifying and self-contained escape respirators to enable the general worker population to egress safely from a potential CBRN terrorist incident. To provide another option for multiple responder groups, which also provides a higher level of protection compared to APRs, the CBRN PAPR standards development was identified as the fourth priority for standard development and implementation. The PAPR standards also addressed the identified needs and concerns of the First Receivers in the medical community.

NIOSH continues to develop approval criteria for additional types of respirators in response to responders’ needs for appropriate respiratory protection against the anticipated hazards faced in performing rescue and recovery operations resulting from viable terrorist threats, as well as HAZMAT incidents. New approval criteria to include CBRN protections are actively under development in NIOSH’s NPPTL Policy and Standards Development Branch for the following respirator types:

NIOSH would like to hear from you regarding your experiences working with CBRN Respirators and the NIOSH standards development processes. Are there user needs for CBRN selection, use, and maintenance that NIOSH could help address? Have responders used existing CBRN products for HAZMAT or other uses? Has the NIOSH standards setting process of vetting concepts before rulemaking activities been effective? For more information on the NIOSH respirator program visit the Respirators Topic Page.

Mr. Szalajda is the Branch Chief for Policy and Standards Development in the NIOSH National Personal Protective Technology Laboratory.

3 comments on “Respiratory Protection for Terrorist Threats and Other Emergencies”

I was wondering if the underlying list of chemicals that forms the basis of the Test Representative Agents has been published in a citable document. I note that the list was published in the 2005 draft document “NIOSH Interim Guidance on the Use of Chemical, Biological, Radiological and Nuclear (CBRN) Full Facepiece, Air-Purifying Respirators/Gas Masks Certified Under 42 CFR Part 84 CBRN APR User Guide” – has this progressed from the draft stage?

Thanks in advance,
David

Dear Mr. Szalajda,
Can you tell me if any filtering facepiece particulate respirators have been according to NIOSH CBRN standards?
Many thanks.