Safety and Health in the Horse-Racing Industry 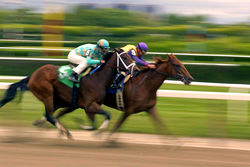 The incident at Churchill Downs earlier this week is a reminder of the dangers involved in the horseracing industry. Most of the news coverage was focused on the tragedy involving the horses. Fortunately, according to reports, the jockey and exercise rider involved were not seriously injured. It is estimated that over 146,000 individuals work in the horse-racing industry. This estimate includes jockeys, trainers, exercise riders, grooms, valets, starting gate attendants, apprentice jockeys, and veterinarians. Little is known about the health status or number and nature of injuries and illnesses to workers in this industry. However, there are many risk factors involved when a 115-pound jockey rides an 1,100 pound animal running 40 miles per hour. In addition to the jockey, other workers have their own safety and health considerations. While health issues in the horse-racing industry, particularly those associated with weight reduction for jockeys, have become more recognized, the safety and health concerns in the horse-racing industry as a whole are not well documented.

As we enter the Triple Crown racing season, the National Institute for Occupational Safety and Health (NIOSH) just released a new document An Overview of Safety and Health for Workers in the Horse-Racing Industry. The NIOSH research and the resulting document were generated in response to a request from the Subcommittee on Oversight and Investigations of the U.S. House of Representatives Committee on Energy and Commerce.

To address the request, NIOSH conducted a review of the available safety and health literature on thoroughbred and standardbred horse-racing; conducted site visits to two racetracks in Lexington, Kentucky (Keeneland Race Course and the North American Racing Academy); completed a fatality investigation; conducted analyses of injury data from relevant data sources; reviewed regulations governing the horse-racing industry in the United States and other countries; and held a public meeting in order to garner concerns about the health and safety of workers in this industry.

The report notes that between the years 1998 and 2006 an estimate of more than 14,000 non-fatal occupational injuries associated with the horse-racing industry were treated in U.S. hospital emergency rooms. Additionally, 79 deaths occurred to those working in this industry between 1992 and 2006. These numbers are almost certainly underestimates of the true numbers due to inconsistent or lacking reporting systems.

Personal protective equipment (PPE) such as helmets and vests, worn by all workers in close proximity to horses could help to reduce the severity of injuries and the number of deaths. NIOSH examined regulations from nine horse-racing states and found that all had at least a minimum requirement regarding helmets. However, the rules vary by state in regards to who is required to wear a helmet and when. Safety vests can protect those riding or working around horses from kicks to the abdomen. Five of the six states that require jockeys to wear safety vests also specify that the vest have a shock absorption protection rating of at least 5 as certified by the British Equestrian Trade Association. Riders are also at risk if reins snap during a race. The injuries resulting from the loss of control of a horse can often be very severe. Ohio is the only state examined that mandated the use of safety reins (i.e., reins that are reinforced with a wire cable or nylon strap).

Other safety and health concerns include musculoskeletal disorders, lead exposure from lead plates added to saddles to adjust the weight each horse carries in certain races, short- and long-term health effects from weight reduction behaviors, and potential health concerns due to the release of silica from synthetic race tracks. Efforts to control or regulate safety and health issues in the horse-racing industry are complicated by the fact that jockeys are considered independent contractors, as are many employees associated with horse-racing; and may not be covered by the Occupational Safety and Health Administration (OSHA) or by the Department of Labor’s Wage and Hour Division.

The new document includes recommendations for making the industry a safer place to work. The recommendations are subdivided for industry representatives (race tracks, racing commissions, and horse owners) jockeys, professional associations, and other race track workers.

While the true risk for injuries cannot be fully understood until there is a consistent reporting system across the industry, many opportunities for research exist. As NIOSH continues to monitor the safety and health issues associated with this industry, we would like to hear about emerging safety and health concern you may have.

For more information, visit the NIOSH topic page on safety and health in the horse-racing industry.

Ms. Hendricks is a Research Epidemiologist in the NIOSH Division of Safety Research.

12 comments on “Safety and Health in the Horse-Racing Industry”

First of all, thank you Kitty for an outstanding report. Your committee was quickly able to ignore the politics and dive into our safety issues. This was no small feat with such a dysfunctional industry. Your report concluded with a very simple road map to help address the current and future safety issues. Hopefully the horse racing industry is finally starting to take safety seriously. Thanks for all your hard work!

Not only is the work environment dangerous, some of the living quarters at the race track do not even meet OSHA’s Temporary Labor Camps standard, 29 CFR 1910.142 for square footage or conditions. Again, the issue of independent contractors makes the requirements difficult to enforce.

As a particpant-observer-researcher, I commend this NIOSH study group for its recommendations. It is a beginning. In contrast to so many other industries, there is very little published wisdom about safety in horse racing. What does exist pertains largely to the horses and jockeys, a visible but small subset of the workforce. While there is an attempt to establish a scientific basis for decision-making with an equine injury surveillance system (Scollay), there has been little response and no unified effort to examine incidents and injuries for the humans. I do hope that the industry regards the report seriously and at least collaborates to address the myriad issues pertaining to built environment, health behaviors, industry practices, exposures, etc., that also contribute to industry performance.

this is a very informative article. i am glad someone is taking a stand in the safety of horse racing.

I was searching for this information since many days as I am very inerested in Horse Racing and faced many problems till now. The information produced in the site provided the solution very accurately regarding my requirement, I would like to thank the members for promoting the blog.

Thank for sharing this post this is a perfect blog for getting best information about of horse racing.

WOW !! What a Wonderful blog and great shared to Safety and Horse-Racing Industry, Really cheers author for your helpful post and information.

Horse-Racing practiced strong safety precautions. A beginner or you are professional rider wearing helmet is necessary. Your safety is the main concerned, accident can happen all the time even how much you trained your horse or how much you ride on the same horse.

Wondering about two injury modalities –
1 – CTD/ MSD’s are expected – However is there an exposure model for this industry yet?
2 – CTE exposure from accumulated trauma /neck and head jarring due to inertia and vertical and horizontal forces applied during racing