Familial Hypercholesterolemia Screening in Children and Adolescents in the United States: Where Are We Heading? 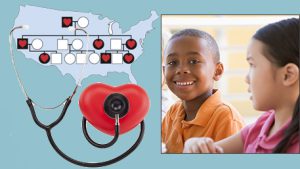 A September 2022 publication recommended that every European country should have a Familial Hypercholesterolemia program for early detection screening, diagnosis, and care.

Familial Hypercholesterolemia (FH) is a genetic condition that results in elevated levels of low-density lipoprotein cholesterol (LDL-C) from birth, resulting in increased risk of heart disease and myocardial infarction. A 2021 blog from our office highlighted the prevalence of FH, diagnostic strategies, treatment management of those with FH, and the public health importance of identifying people with FH. The blog highlights the benefit of earlier age of diagnosis since recommendations for prevention of atherosclerotic cardiovascular disease (ASCVD) includes treatment to lower LDL-C at a younger age.

History of Lipid Screening Recommendations in U.S. Children and Adolescents

A National Heart, Lung and Blood Institute expert panel recommends universal lipid screening for patients who are between 9 and 11 years of age and a second universal screening performed between 17 and 21 years of age. The Integrated Guidelines for Cardiovascular Health and Risk Reduction in Children and Adolescents was published in 2011. A recent cohort study supported this recommendation, which found childhood LDL-C peaked around age 9 years with levels similar to those at age 18 years.

The August 2016 US Preventive Service Task Force (USPSTF) guidelines for screening of lipid disorders in children and adolescents are currently being updated. The 2016 guidelines concluded ‘that the current evidence is insufficient to assess the balance of benefits and harms of screening for lipid disorders in children and adolescents 20 years or younger.’

In 2020, Representatives of the Global Familial Hypercholesterolemia Community published JAMA Cardiology Global Call to Action with public policy recommendations. They recommended that treatment begin in childhood. Our office summarized the group’s recommendations in a previous blog.

In 2021, pediatric screening for FH was selected by the European Commission as one on the best practices in non-communicable disease prevention. Screening for FH is based on measuring cholesterol levels, by performing genetic testing, or a combination of these methods.

Incorporation of genetic testing into screening

A 2020 study out of the UK developed a model to estimate the time to identify different proportions of FH comparing three different identification strategies. The model found that it took fewer years to identify 25%, 50% and 75% of people with FH in the population using a combined strategy of 1) universal child-parent screening (children aged 1 year old are tested for cholesterol and FH mutations at the time of routine immunization and testing of parents in those children with FH diagnosis) and 2) family-based cascade genetic testing (relatives of any individual with an FH mutation are tested for that same mutation), compared to either of these strategies alone.

There are several issues to consider in studying the cost of FH screening. One of these involves the variability in FH case-finding criteria. The second challenge, which may explain lack of cost-effectiveness studies regarding FH screening in children, is how to measure health benefits when the long-term effects of elevated LDL-C are not evident until adulthood. A third area involves treatment cost over time. All of these will also require evaluation across variable settings.

Cost-effectiveness of case-finding criteria for FH in adults in primary care was investigated in a UK study. The use of the Simon Broome (SB) criteria yielded the most cases identified but required a large expenditure of healthcare resources. In contrast, while FAMCAT2 (familial hypercholesterolemia case ascertainment 2 tool) did not identify as many cases as SB, it was considerably cheaper and a good combination of sensitivity and specificity. The mean age of patients in this study was 56. These models rely on family health history and clinical variables and may not perform as well in children due to the variability in disease status of family members and clinical measures in children compared to adults.

A pilot study of universal screening of children and child-parent cascade testing for FH in Australia found that screening children aged 1–2 for FH with a point of care cholesterol level at the same time as a routine immunization appointment was feasible, effective and acceptable to families. This study also included economic evaluation through Markov modeling combined with a study by Ademi et al. to suggest improved cost-effectiveness when compared with conventional methods (e.g., cascade testing in adults) that detect FH later in life.

If European countries move forward with early FH detection and screening programs, as recommended in the recent publication mentioned at the beginning of this blog, a more robust evidence-base will become available regarding screening for FH in children and adolescents. Additionally, implementation pilot studies and data collection through registries here in the U.S. will help provide the necessary evidence to inform guidelines in the context of the U.S. healthcare system. These efforts should help build the required evidence base for future USPSTF guidelines on FH screening in children and adolescents.