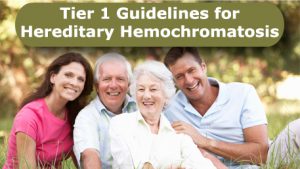 An important function in public health genomics is to identify evidence-based genomic applications that can save lives and prevent disease. In maintaining the PHGKB Tier Coded Guidelines database, we routinely look for Tier 1 applications of genomic testing strategies that have evidence-based guidance supporting implementation in specific clinical scenarios. We only consider recommendations that have a basis in synthesized evidence, such as a systematic review. Tier 1 designation for clinical applications associated with certain conditions — familial hypercholesterolemia, hereditary breast and ovarian cancer, and Lynch syndrome — has previously helped catalyze action to save lives by clinicians, health systems and public health programs.

In 2020, CDC convened a seminar and published a blog that reviewed the accumulating evidence on the health burden of a condition that is commonly called hereditary hemochromatosis. A more precise term is HFE-associated hemochromatosis (HH) as HH is mostly found in adults with two copies of particular HFE gene variants. HH is a genetic disorder in which the body can store too much iron, with complications that include severe liver disease—cirrhosis and cancer. Researchers led by Prof. David Melzer of the University of Exeter have reported that among participants of European origin in the UK Biobank who were ages 40-70 years at baseline, men who carried two copies of the p.C282Y HFE gene variant, i.e., p.C282y homozygotes, were significantly more likely to subsequently experience severe liver disease, osteoarthritis, dementia, and premature mortality, and female homozygotes were more likely to develop osteoarthritis. In addition, among UK Biobank participants aged 60-70 years, male p.C282Y HFE homozygotes were significantly more likely to report having chronic pain and sarcopenia, while both men and older (aged 65-70) women with two copies of the variant were more likely to be frail. In the US, roughly 1 in 300 non-Hispanic whites has HH, and it occurs less frequently in other racial/ethnic groups.

Here we explore Tier 1 applications of testing for HH. In 2006, the US Preventive Services Task Force (USPSTF) recommended against routine genetic screening for HH at the population level but suggested family-based genetic counseling and testing, citing the American Association for the Study of Liver Disease (AASLD), the American College of Gastroenterology (ACG), and the American Gastroenterological Association as recommending genotyping of first-degree relatives of individuals identified with C282Y homozygosity. A 2016 review identified three evidence-based guidelines, all of which called for routine testing of first-degree relatives of patients with HH. In addition to an AASLD guideline, these included one from the European Association for the Study of the Liver (EASL) and one from Dutch medical societies.

We conducted a PubMed search of HH testing guidelines published since 2016 and identified three documents, two from the ACG. The 2019 ACG guideline recommends “family members, particularly first-degree relatives, of patients diagnosed with HH should be screened for HH (strong recommendation, moderate quality of evidence).” A 2016 guideline from the European Molecular Quality Network (EMQN) recommends “Testing adult siblings (brothers and sisters) of p.C282Y homozygotes… (1B)” and “Testing adult offspring of p.C282Y homozygotes… (1C).” As these guidelines appear to be based on formal evidence review and grading, the recommendations for family-based testing qualify as Tier 1 applications. Following the links in this blog and reading the full guideline text would be important for anyone planning to implement the recommendations.

Other clinical guidelines developed on the basis of expert opinion have made similar recommendations. For example, the Royal Australian College of General Practitioners (RACGP) recommends genetic testing in patients with HH followed by cascade screening of relatives of patients confirmed to be either homozygous for the p.C282Y variant or compound heterozygous for the p.C282Y and p.H63D variants.

The bottom line remains that people with a family health history of HH should talk to their doctors about whether testing is right for them and their family members. While our search identified no Tier 1 sources supporting population screening for HH, evidence-based guidelines do support Tier 1 designation for genetic counseling and testing of specific family members of people who are known to be p.C282Y homozygotes. The Tier 1 designation may also facilitate family-based awareness and diagnosis of HH and can influence clinical practice, as well as implementation research for evaluating optimal approaches to reduce the morbidity and mortality from HH.