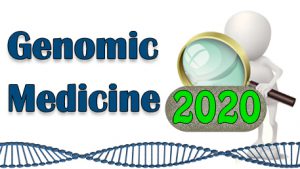 Advances in genomic medicine continue at a steady pace. In a December 2019 paper, The Genomic Medicine Working Group of the National Advisory Council for Human Genome Research of the National Human Genome Research Institute (NHGRI) identified 10 papers with the most significant advances in the field. In our 2019 end of the year blog. we featured 5 of these papers based on their potential for near-term impact on clinical practice and public health.

We are at it again in 2020! The NHGRI Working Group has again selected its ten most significant advances among the 45 recognized accomplishments published during the year. We chose the 4 applications that were evaluated in population-wide implementation studies.

Whole-genome sequencing (WGS) is being used increasingly to identify genetic causes of rare diseases. Nevertheless, WGS has so far been used mostly in specialized centers rather than on a nationwide scale. The working group chose a study conducted in 57 National Health Service hospitals in the United Kingdom as well as 26 hospitals in other countries. WGS results were reviewed for over 13,000 patients, three quarters of whom had either a rare disease or other unusual phenotype. Genetic diagnoses were made in 16% of patients, leading to specific treatment decisions in some. The paper not only shows the diagnostic utility of genome sequencing but also how it can be deployed in multiple populations.

The working group chose two 2020 studies on population screening for 3 genetic conditions that our office has designated as Tier 1 applications (hereditary breast and ovarian cancer, Lynch syndrome and familial hypercholesterolemia). The first study uses electronic health records (EHR) among individuals in whom a pathogenic/likely pathogenic variant in a tier 1 gene was discovered through Geisinger’s health MyCode Community Health Initiative. The second study describes the use of DNA-based screening in over 26,000 Healthy Nevada Project (HNP) volunteers to find identifiable monogenic risk for these three conditions. Both studies showed that 1% of unselected populations have pathogenic/likely pathogenic variants associated with the 3 genetic conditions and that most participants are unaware of their increased risk. The studies establish proof of concept for the use of DNA-based screening in the general population. In September 2020, we highlighted the two studies in a blog and webinar presentations by the first authors.

Newborn screening (NBS) is a well-established public health program that tests all babies at birth for rare, treatable conditions that require immediate intervention. Tandem mass spectrometry (MS/MS) is the main screening method for inborn errors of metabolism (IEMs). The working group chose a study that evaluated whole-exome sequencing (WES) as an adjunct method to MS/MS in NBS in California. Residual dried blood spots and data were obtained for IEM cases from 4.5 million infants. WES was found to have a sensitivity of 88% and specificity of 98.4%, as compared with 99% and 99.8%, respectively for MS/MS. Although WES alone is generally not sensitive or specific enough to be a primary screen, it can be useful as a secondary test for infants with abnormal MS/MS screening results. WES can reduce false-positive results and facilitate timely and more specific diagnosis. The study is the largest population-based sequencing effort, allowing evaluation of WES as a tool for NBS.

Noninvasive prenatal testing (NIPT) is an emerging genomic application that uses circulating fetal cells in maternal blood to conduct whole-genome sequencing. The test is increasingly used in the clinical management of high-risk pregnancies, but its yield as a prenatal test in all pregnant women is unknown. In this population study, NIPT was performed in over 73,000 pregnancies in the Netherlands. 343 fetuses with trisomies were detected, and another 207 had other abnormalities. Comparing NIPT with invasive diagnostic testing (e.g., amniocentesis), positive predictive value was >95% for trisomies 21 and 18 but much lower for other abnormalities. These results illustrate how NIPT may be useful in population-wide pregnancy screening for trisomies 21 and 18.

Diagnosis of rare diseases, newborn screening, non-invasive prenatal testing and adult genetic screening are 4 promising areas for public health genomics in 2020. The highlighted papers are pilot or proof of concept population-based implementation studies. More data on implementation, benefits, harms and costs are needed before evidence-based guidelines can drive public health implementation. Watch out for these 4 areas and other emerging genomic applications in the years to come.

We invite our readers to submit comments on any promising population-wide implementation studies or genomic applications with potential for public health impact. Please submit your input below.