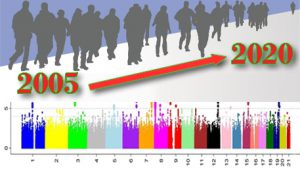 Genome-wide association studies (GWAS) test thousands or millions of genetic variants scattered throughout the human genome for association with human traits or diseases. GWAS burst onto the scientific scene in 2005 and have been enabled by technological advances and falling prices. A recent commentary in Nature Communications summarized the state of the science: To date, GWAS results have been published in more than 4,300 articles, reporting more than 55,000 unique genetic associations with nearly 5,000 traits and diseases. Although newer technologies are available, notably whole genome and whole exome sequencing, there are no signs that gene discovery using GWAS is slowing down.

After 15 years, what is the cumulative impact of GWAS on medicine and public health? We now know that finding genetic associations is only the first step on a long and difficult mission. So far, most research translating GWAS findings has taken one of two distinct paths: The first pursues biological insights that could lead to new therapies; this remains challenging because most GWAS-identified variants in non-coding parts of the genome and appear to act only through complex regulatory effects. The second path makes use of population-level data and statistical methods to develop indicators of disease risk. The two leading examples of this approach are polygenic risk scores (PRS) and Mendelian randomization (MR).

Polygenic risk scores (PRS) summarize information about a person’s inherited disease risk by combining GWAS data for thousands or even millions of common variants in their genome. Although each variant confers very little increase in disease risk, a composite PRS can be used to stratify people into risk groups. This approach has been applied to coronary heart disease, obesity, breast cancer, and other conditions included in our Public Health Genomics Knowledge Base.

PRS are still a work in progress. As we discussed in a previous blog post, PRS may be useful if 1) a scientifically valid, predictive score can be constructed for a specific disease and population, and 2) its use is shown to add value to medical decision making in a specific setting. PRS will complement rather than replace other clinical tools and must be considered in the full context of ethical, legal, and social issues related to medicine and public health, including policy and reimbursement issues, provider and public education, and health system readiness. Premature use of PRS in practice can exacerbate health disparities in ethnic and minority populations. For a more thorough discussion of the applications and limitations of PRS in clinical practice and public health, please check out our recent one-hour webinar.

Mendelian randomization is a research method that provides evidence for suspected disease risk factors using genetic variants as natural experiments. The fundamental idea is that inheritance of gene variants is a random process, irrespective of other characteristics that can confound disease-risk factor associations. The method uses genetic variants as intermediate or instrumental variables to infer the causal effect of modifiable factors, such as diet or environmental exposures.

For example, epidemiological studies may provide unreliable evidence for the effect of alcohol consumption on blood pressure because other factors, or confounders—such as age, ethnicity, or social class—can influence both alcohol intake and blood pressure. How does MR help? In this case, ALDH2 gene can serve as an instrumental variable. We know that people with the ALDH2 *2*2 genotype, which slows alcohol metabolism, experience unpleasant symptoms when consuming alcohol and thus tend to drink less than others. Finding that people with this genetic variant also have lower blood pressure provides evidence that lower alcohol consumption decreases blood pressure.

The use of MR as a methodology has exploded with the growth of GWAS. Instead of one genetic variant at a time, investigators are increasingly using combinations of genes and polygenic risk scores as instrumental variables. In one example, a 2017 study combined MR with GWAS to provide strong evidence that the genetic variants associated with educational attainment affected the risk of Alzheimer disease risk, with higher education protecting against dementia.

Because of its focus on modifiable environmental exposures, MR is relevant to preventing or treating diseases in entire populations, rather than in subsets of genetically susceptible individuals. For a more thorough discussion of the applications and limitations of MR in clinical practice and public health, please check out our 2019 one-hour webinar.

Public Health Impact of GWAS in 2020: Glass Half Full or Half Empty?

In a 2013 blog post, we acknowledged the biological and clinical insights already gained from GWAS but stressed the need for realistic expectations about their public health impact. When we ask today, “Is the public health genomics glass half full or half empty?” our conclusion is the same: GWAS is “only the first step of a long translational journey from gene discoveries to improved health for individuals and populations.”