Is it Time to Integrate Polygenic Risk Scores into Clinical Practice? Let’s Do the Science First and Follow the Evidence Wherever it Takes Us! 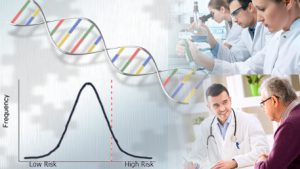 In case you have not been paying much attention to genomic medicine research or social media coverage, you might have missed a clear uptick in the past couple of years  on the value of polygenic risk scores in clinical practice and population screening. (see examples here, here, here, and here)

Polygenic risk scores (PRS) summarize information about a person’s inherited disease risk based on many dozens, hundreds, thousands, or even millions of common DNA variants in their genome. Each variant confers very little increase in disease risk. But composite (or polygenic) risk scores made up of the number of such variants have been shown to stratify people to normal distributions of disease risks for a wide range of diseases. Genetic variants are not individually predictive but together can lead to marked variation in disease risk between the upper versus the lower parts of the risk distribution, depending on the number of variants that confer risk. Examples of studies include coronary heart disease, obesity, breast cancer, and others included in our Public Health Genomics Knowledge Base.

As a result of new scientific findings, two camps have clearly emerged in the PRS world: the enthusiasts, who clearly think there is enough evidence for using PRS in certain clinical scenarios, and the skeptics who believe that we do not have enough evidence to justify such claims. Of course, there is a continuum from enthusiasm to skepticism. On one end of the scale, some direct to consumer genetic testing companies have rushed to offer polygenic risk scores to customers undergoing consumer genetic testing. On the other end, some hardy statisticians and methodologists, armed with real and simulated data argue that polygenic risk scores are unlikely to be useful in clinical practice or can cause harms and widen health disparities.

In 2018, we sponsored an online webinar discussion between representatives of the two camps (watch one hour video and slides here). This year, the discussion was taken a step further. In May 2019, we attended two NIH workshops, one hosted by the National Human Genome Research Institute (NHGRI) and the second by the National Heart, Lung, Blood Institute (NHLBI). Experts from the worlds of medical genetics, epidemiology, implementation science, health systems, economics, behavioral science, genetic counseling and others and discussed current data on the validity of PRS, the potential for benefits and harms, and attempted to develop a scientific research agenda for the evaluation and implementation of PRS.

Here is our simple take home messages. We think there is a great potential for PRS to make a health impact in certain clinical scenarios, if we can answer three broad questions using a rigorous scientific agenda: 1) Construct scientifically valid PRS within each population ancestry group using relevant variables; 2) For each intended clinical use of PRS (by disease, population, setting), study the added clinical value of the PRS, and overall balance of benefits and harms of PRS in rigorous research studies (including randomized controlled clinical trials or other rigorous hybrid implementation designs); 3) Assess ethical, legal and social issues that result using PRS in different populations, including policy and reimbursement issues, provider and public education as well health system and organizational readiness.

Just like other areas in medicine and public health, there is no one size fits all for PRS. Their eventual use in clinical practice will be specific to clinical scenarios, and populations groups defined by race/ethnicity, ancestry, age, sex/gender, and disease risk factors. Our positive outlook on PRS is somewhat tempered by how much we don’t know about PRS and how much more research is needed. So, let’s do the science first and cautiously follow the emerging evidence wherever it may take us.

One comment on “Is it Time to Integrate Polygenic Risk Scores into Clinical Practice? Let’s Do the Science First and Follow the Evidence Wherever it Takes Us!”

As with any test we need to think about how the results are going to be used. Just the ability to construct a polygenic risk score and predict risk does not mean that any value will result from its application. There has to be an action that improves health or that is perceived as valuable to justify application. An action that may improve health would be to better define risk groups who can benefit from changes in screening practice. If we are just going to tell individuals they are at higher or lower risk for a disease based on risk score then the impact could be very harmful. Experience with smoking cessation was that telling individuals that they are at increased risk for lung cancer based on genetic profile of Cyp2D6 actually resulted in fatalism and increased depression, with no improvement in smoking cessation outcome. Before a test is adopted some sort of feasibility study is needed to show that the test provides beneficial rather than harmful information.