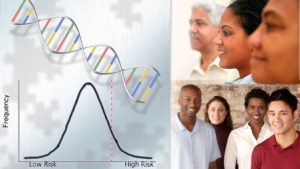 This blog is a summary of our recent commentary on polygenic risk scores (PRS). PRS provide a rapidly emerging example of precision medicine and are based on multiple gene variants that each have weak associations with disease risks, but collectively may enhance disease predictive value in the population. The added value of PRS is unclear compared with or in addition to existing prevention and management approaches based on age, family history, and environmental risk factors. This is especially true among populations that are underrepresented in genomic research. Studies have consistently demonstrated that PRS do not predict risk among non-European populations to the degree that they do for European populations. This is because populations in current genome-wide association studies (GWAS) are primarily of European descent, and therefore PRS do not account for genomic variation within and between underrepresented, non-European populations. This limits the validity and utility of PRS among African, Latin American, Asian, and other ancestry groups.  More broadly, issues of health disparities in racial and ethnic minority populations have been observed in other areas of genomic medicine. For example, non-Whites who received multigene sequencing have higher rates of variants of unknown significance (uninformative genetic results in which it is unknown if a gene variant is associated with a given health outcome or not) than Whites, since the classification of variants (as pathogenic or non-pathogenic) relies heavily on data from primarily European populations. Compounding resulting disparities, there is a paucity of research related to the clinical implementation of genomics in diverse settings and among diverse populations.

Engaging underrepresented communities in a culturally aware manner, may allow for sustained collaboration with community partners in research. Invigorated efforts are needed to engage communities first, and then conduct inclusive genomic research. The NIH All of Us Research (https://go.usa.gov/xmUz4) and NHLBI’s Trans-Omics and Precision Medicine (TOPMed) programs have embraced this concept. In addition to domestic efforts to include racial and ethnic minority groups in genomic research, global efforts to build capacity for genomic research, such as The Human Heredity and Health in Africa initiative, are needed to build upon our understanding of global genetic diversity and health.

In the interim, we should continue to intervene on health behaviors and policies proven to be effective in improving health outcomes and reducing the burden of diseases such as heart disease and cancer. Traditional public health approaches will continue to be important in reducing risk of adverse health outcomes and an important component of precision public health. As PRS takes a foothold in clinical care, researchers must act to ensure that advances from PRS research will benefit all.

I agree that there should be more sequencing in less well-represented groups.

I am also (gradually) working on learning more about PRS scores.

However, my concerns are a little different:

1) In this earlier paper, my main concern was the limited overall utility (even in those of European ancestry).

Likewise, I apologize for being nit-picky, but there was at least one typo in that paper that I don’t believe has been formally corrected yet (even though the typo was politely confirmed by the author):

2) In a more recent pre-print, I think there was also some concerns about technical variation confounding the results (where results on the same arrays looked more similar between different super-populations, compared to samples processed with different arrays on different populations):