Precision Medicine in Action: How can we make cascade screening for hereditary conditions work best in the real world? 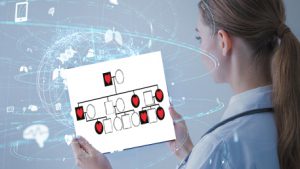 If someone in your family were diagnosed with a genetic condition, would you want to be tested for that condition as well? For some disorders, like Huntington’s disease, for which there are no means available for prevention or cure, the question can be extremely difficult to answer. However, with many other conditions (for example familial hypercholesterolemia (FH), hereditary breast and ovarian cancer syndrome (HBOC), and Lynch syndrome (LS)), genetic testing can inform early disease prevention and treatment. Offering genetic counseling or genetic testing to family members of people diagnosed with these and many other disorders is called cascade testing or cascade screening. While cascade testing may be a simple concept, it is not always easy to implement in practice.

A recent systematic review by Srinivasan et al. investigated barriers and facilitators to effective cascade testing. In addition to uptake of cascade testing, the review examined disclosure of testing results among family members. Thirty studies were included in the final analysis. Barriers and facilitators were described at the individual level (among patients and family members), interpersonal levels (among families, and with respect to health care providers), and environmental level (mainly relating to accessibility of testing).

Individual level factors. Barriers on the individual level included knowledge gaps (such as understanding of who would be at risk in families), numerous factors classified as attitudes/beliefs/emotional responses (such as unwillingness to share health information for emotional or other reasons, lack of a plan on how to disseminate the information, and concerns about privacy, anxiety or guilt), and factors associated with relatives (such as concerns about how family members would react to the information). Individual level facilitators included having a history of related risk factors in the family, receiving test results that were not ambiguous, feeling a moral obligation to family members, among many others.

While the results should prove very informative and potentially useful to those who plan cascade testing programs, much more research is needed to better understand what factors can be influenced to promote appropriate cascade testing. There are certainly some easily identifiable “low-hanging fruit,” such as taking time to educate patients about who would be at risk, providing them with an appropriate information dissemination plan, as well as other tools for support, and addressing potential concerns about issues such as privacy. To promote facilitators and overcome barriers to effective cascade testing, we need to better to understand what they are and how they can be influenced. This systematic review is a good start in that direction.