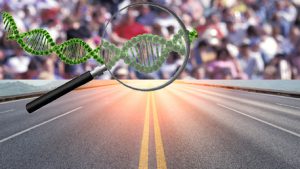 Since 2012, the CDC Office of Genomics and Precision Public Health (OGPPH) has identified three autosomal dominant conditions for which there exist evidence-based recommendations to prevent morbidity and mortality from either cancer or heart disease. Using our evidence-based framework, we have collectively labeled the following conditions as tier 1 genomic applications: 1) hereditary breast and ovarian cancer associated with BRCA1 and BRCA2 mutations, 2) Lynch syndrome (associated mostly with increased risk of colorectal and endometrial cancer) and 3) familial hypercholesterolemia (associated with increased risk of atherosclerotic heart disease). In the United States, these three conditions affect a total of about three million people, most of whom do not know they are affected.

OGPPH continues to work with multiple stakeholders and partners to implement evidence-based guidelines in public health programs and clinical practice. However, from the outset, we have recognized that even if fully implemented, existing recommendations would miss a substantial proportion of persons affected with these diseases. This is because the existing recommendations are mainly for people who have either a strong family history or certain ethnic backgrounds (e.g. Ashkenazi Jewish ancestry). Reliance on family history means that a large proportion of affected people could be missed.

There have been increasing discussions about the suitability for population genetic screening (for example, testing everyone of a certain age), particularly for tier 1 conditions. Implementation will depend on gathering additional evidence of analytical and clinical validity, clinical utility, cost effectiveness, implementation strategies, including adoption, acceptability and practicality, as well as ethical, legal and social considerations.

At the same time, several health systems and population-based biobank studies have been launched. These studies include biobanking of biological specimens, genomic studies such as whole genome sequencing, as well as linkage with electronic health records. These types of studies provided a unique opportunity to explore the public health impact of a genome-first population screening approach, assess its potential effectiveness, and study its implementation.

Two recent studies present data that begin to fill knowledge gaps related to population screening for these three conditions. The first is an observational study of electronic health records (EHR) among individuals in whom a pathogenic/likely pathogenic variant in a tier 1 gene was discovered through Geisinger’s health MyCode Community Health Initiative. In this study, EHR were evaluated for a prior genetic diagnosis or relevant personal/family history, clinical diagnoses, and risk management. Overall, of 63,001 MyCode participants, 753 had one of the three tier 1 conditions (1.2%). Of the 351 participants included in this study, 87% did not have a prior genetic diagnosis of their tier 1 result. Eighty-seven percent of these participants did not have a prior genetic diagnosis of their tier 1 result. Of these, 65% had EHR evidence of relevant personal and/or family history of disease. Of 255 individuals eligible for risk management care, 70 had a recommended risk management procedure after results disclosure. Thirteen percent of participants received a relevant clinical diagnosis after results disclosure. Based on this study, a genomic screening program in this population can identify previously unrecognized individuals at increased risk of cancer and heart disease and facilitate risk management and early cancer detection.

The second study describes the use of DNA-based screening in 26,906 Healthy Nevada Project (HNP) volunteers to find identifiable monogenic risk for these three conditions. Researchers identified disease risk (that is, pathogenic or likely pathogenic genomic variants) in 358 (1.33%) of the 26,906 adult volunteers. Of participants identified as being at increased risk for disease, the authors found that the EHR data (available for 76% of the volunteers) strongly supported the conclusion that the screening correctly identified a high-risk group, with 10% having had previous genetic testing and 21.9% having clinically relevant disease. However, the disease risk seemed to have remained latent in the 78.1% of those with a risk for cancer and/or heart disease who did not have a relevant disease diagnosis in their EHR.

Both studies establish proof of concept for the use of DNA-based screening in unselected cohorts as a strategy for identifying a previously unknown disease risk. The studies extend the knowledge set about DNA-based screening, particularly as it relates to prevalence and disease risk. This work provides an emerging picture of increased morbidity in adults who screened positive for pathogenic and likely pathogenic variants associated with the three conditions.

Population screening programs are built on the notion that an increased disease risk can be identified in people in an affordable and acceptable manner so that better health outcomes can be achieved through evidence-based interventions. Systematic approaches to carrying out targeted health care encounters and tracking long-term outcomes are critical if researchers are to arrive at an understanding of whether and how DNA-based screening can be the first step in a universally accepted population health-screening program.

Numerous important evidence gaps related to DNA-based population health screening are been addressed by ongoing studies and have been previously summarized in a blog post. An evidence-based approach to population-based genomic screening was proposed by the Genomics and Population Health Action Collaborative of the National Academy of Medicine Roundtable on Genomics and Precision Heath. More than ever, there is a need for large, collaborative, pilot implementation studies to evaluate evidence of clinical utility and economic feasibility, as well as optimal implementation strategies.

Join us for a webinar on September 17 to discuss these studies and the road ahead for population-based genome screening.

3 comments on “The Long Road to Population-based Genomic Screening”

Similar numerators, but very different denominators – is one of these percentages miscalculated?

We regret the error in the blog. We have revised the blog with the correct numbers.

These study summaries provide no direct evidence of “economic feasibility” but, indirectly, say a lot. That is, if one applies some reasonable cost figure to each of these programs (and not just a direct cost per test), it’s difficult to imagine that at the end of each testing/clinical process (a small fraction of those tested are expected to benefit) there is cost effectiveness. How might the testing be “valued” or costed, taking into account all the resources thrown at these programs? If the program is financed by an outside party (eg, pharma), should that considerable resource be taken out of the cost equation? Perhaps the answer to the direct cost of testing is to apply the market value of the screening test methodology used, including confirmatory testing using an orthogonal method? However, there will be considerable additional resources necessary, starting enrolling and collecting participant tissue specimens, results reporting resources, clinical follow-up, and support services such as IT. It would be quite helpful to those of us thinking about the value of genomic screening to have honest and sound answers to these questions. We should also be/get clear about the comparison interventions.