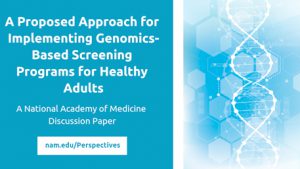 The following report was developed by the Genomics and Population Health Action Collaborative (GPHAC) as a potential roadmap for groups planning to carry out projects involving genomics-based screening programs in the healthy adult populations. The report is available in its entirety on the National Academy of Science, Engineering and Medicine website.

The advent of next generation sequencing has transformed clinical practice as an essential tool in diagnosis of genetic diseases. How this technology can be used to benefit the general population is an exciting task for public health genomics. The potential benefits are substantial, but public health interventions carry significant potential risks. Unlike in the clinical setting, public health applications are used in apparently healthy people who may never fall ill from the targeted disorder. In addition, in public health, there is a distinctly different relationship between provider and recipient, in that recipients are typically not seeking out the intervention. As a result, some advocate for limited DNA sequencing data, modeling the way cystic fibrosis carrier screening is applied, whereas others have advocated for broader data acquisition with limited interpretation. The broader approach is founded on the assumption that net costs of a program in which the number of target conditions can expand over time, will be lower if a single test is periodically reinterpreted instead of paying for repeat assays. This is akin to the current situation with newborn screening as a population-based public health program. The best working model for genome data testing remains to be determined, for population screening the capacity exists to offer interpretation on a limited number of genes at this time. The group used the CDC tier 1 list of genomic applications as a starting point.

The GPHAC report covers the optimal genes to include in genomics-based screening programs, the complexity of identifying a point in time at which to begin screening, who should perform the screening, where the programs should be administered, along with ethical and economic considerations.

The roadmap established by this group will need to be updated as new evidence and technology becomes available. Indeed, it became evident through discussions with this group that much data are needed before we know whether routine implementation of genomic screening in the population is warranted. Pilot studies of such an approach should include robust methods for data collection on outcomes, benefits, harms, and costs to establish a firm evidence-based foundation of the promise of genomics-based screening.

We thank members of the GPHAC for this seminal work and invite discussion on this important public health issue. Please provide your input and feedback here.