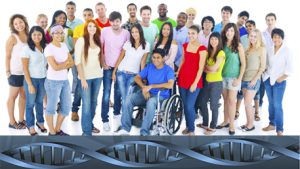 Two recent articles, one in Nature Genetics and another in Genome Medicine, report the lack of racial and ethnic diversity in epigenetic research. This needs to change in order to fulfill the promise of epigenetics as a tool for health equity science.

Health equity is the state where everyone has a fair and just ability to be as healthy as possible. An important component for reaching health equity is addressing social determinants of health (SDOH) which are the conditions in the places where people live, work, and play that affect quality of life and health outcomes. SDOH include environmental factors such as healthcare access and quality, education access and quality, social and community context, economic stability, and the neighborhood and built environment that affect health risk.

A field of study called epigenetics provides an opportunity to further investigate the association between SDOH and adverse health outcomes. Epigenetics assesses how environmental and other factors alter the expressions of genes. The linkage between SDOH and epigenetic changes makes epigenetics a potentially important tool for health equity science.

Epigenetic Studies Have a Diversity Problem

Studies in Europeans also have a greater range of tissues and cell types analyzed compared to studies in other populations. In the EWAS Atlas, a repository of curated EWAS metadata, there are 39 different tissues/cell types analyzed for Europeans, compared to 18 in studies in East Asians and 11 in studies in African Americans/Afro-Caribbeans, while the other races/ethnicities have fewer than 10. Another point of concern is that a large portion of data for non-European populations comes from cell lines instead of primary tissues. This may affect study results due to epigenetic changes occurring in cell lines over time.

Implications of Lack of Diversity of Epigenetic Studies

The lack of diversity in epigenetic studies impacts the study’s ability to assess both genetic and environmental factors in health and disease. This also prevents us from discovering genetic variants that contribute to epigenetic changes, representing a missed opportunity to advance our understanding of the biological underpinnings of health and disease

One reason why the lack of diversity in epigenetic studies is such a detriment to research is that there is genetic variation between different populations. For example, populations in Oceania, central and southern Africa, and the Americas have thousands of genetic variants specific to each population. In twin studies, the average heritability of DNA methylation, the most commonly studied epigenetic marker, is estimated to be 19% while the contribution of genetic effects across methylation sites is about 16%. This provides evidence that genetics can alter a person’s epigenetic profile. The influence of genetic factors varies between methylation regions, with the variation in some regions being over 95% explained by genetic factors. Therefore, the lack of representation of diverse populations with unique genetic variants results in the missed opportunity to find associations specific to these populations.

Perhaps even more importantly, although epigenetics has the potential to uncover the biologic impact of SDOH, it is ironic that not much epigenetic research has been done in populations that would benefit the most from the results of these studies. From a public health standpoint, at its essence, epigenetics is about the influence of the environment on human health and disease. The lack of diversity in epigenetic studies limits the inferences that can be made from these studies. As environmental factors vary between populations, findings from studies using populations of European descent cannot necessarily be applied to different ancestral populations with different social and environmental factors.