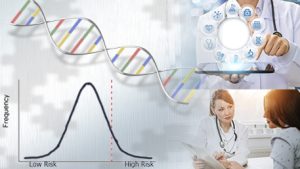 The Promise of Polygenic Risk Scores in Population Health

Many common diseases such as cancer, diabetes, and heart disease, result from the combination of genetic factors and physical and social environmental factors. Genome-wide association studies (GWAS) have identified many genetic variants with relatively small individual effect sizes. To estimate a person’s genetic risk of a certain disease, polygenic risk scores (PRS) are calculated by adding the number of genetic risk variants a person has, weighted by the effect size. Combining PRS with physical and social environmental risk factors can lead to better risk stratification.

Multiple studies have explored the use of PRS in risk stratification, screening, prediction and treatment of chronic diseases. However, to date there has not been strong evidentiary support for their routine use in clinical and public health practice. We still do not know how best to integrate this PRS into health care.

The clinical validity of a test refers to its accuracy in identifying a patient’s clinical status, whereas clinical utility refers to its ability to improve health outcomes, taking both potential benefits and risks into account. Many studies have demonstrated clinical validity of PRS for different diseases. This is an important step because GWAS identify the effects of genetic variants individually, not in combination as in PRS. However, evidence on clinical utility of PRS for different diseases is lacking. If we want PRS to make a meaningful difference in population health, studies on clinical validity that demonstrate differences in risk distributions between affected and unaffected groups are only a starting point.

Cost-effectiveness studies on use of PRS in population-based settings are needed to provide evidence for clinical utility. The second recent systematic review evaluated cost-effectiveness analyses for using PRS for prostate, colorectal, and breast cancer screening in population settings. Of the 587 papers that were assessed for eligibility, only 10 were included in the review. Encouragingly, 8 of the 10 studies concluded that PRS-informed cancer screening was likely to be cost-effective. However, the authors caution that issues such as the cost of generating, managing, and storing PRS data and downstream costs need to be considered. Cost effectiveness analyses for use of PRS for other conditions such as heart disease and diabetes are needed.

Another element of clinical utility is transferability of the test to all populations, especially to people of various racial/ethnic groups and people who are medically underserved.  Most GWAS, which form the basis for PRS, have mainly included people of European descent. This lack of diversity in study populations can lead to limited generalizability of results to other populations and eventually worsen healthcare disparities. Efforts to diversify data in genomic research are on the rise now but studies on the clinical utility of PRS in low to middle income countries are needed.

In this Nature Genetics article, the authors proposed a potential remedy to this transferability gap by developing a new PRS construction method that integrates GWAS summary statistics from multiple populations. A review, validation, and replication of this method will be needed.

The Need for More Evaluation

Building the evidence base for use of PRS in clinical practice requires evaluation of their performance characteristics. The CDC ACCE model (Figure 1) could be used for this purpose. ACCE has been a useful tool in the evaluation of the performance of genetic tests for nearly two decades. It has a comprehensive list of targeted questions that can be applied to address issues concerning the Analytic validity, Clinical validity and Clinical utility of a genetic test, along with Ethical, legal and social implications. Aspects of this model have been implemented by several groups, including Evaluation of Genomic Applications in Practice and Prevention (EGAPP), to evaluate genetic tests. Although ACCE was developed during a time when genetic tests typically assessed only one or a few gene variants at a time, the components of the model would still apply to more complex tests, including PRS.  Thus, ACCE, or potentially augmented and updated versions of it, could prove to be a promising tool for PRS evaluation.

PRS have the potential to usher in a new era of genomics in population health, one in which genomics is used not just for those with genetic disorders, but for everyone. However, to achieve its full potential to improve health, PRS need to be rigorously evaluated for clinical utility, cost effectiveness and transferability, as well as implemented equitably across populations.