Contributions of Genomics to the Fight Against Malaria 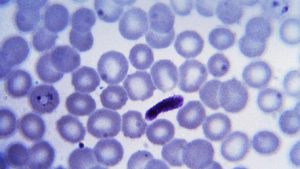 Malaria was endemic in the United States (US) when the Communicable Disease Center was purposefully opened in Atlanta, GA, rather than Washington DC, in 1946. The Communicable Disease Center, now the US Centers for Disease Control and Prevention (CDC), was started closest to where malaria elimination efforts were needed: the Southern US, including Georgia, suffered from the highest morbidity and mortality due to malaria. Using the insecticide chemical DDT as the primary tool to kill the mosquitos spreading malaria, CDC was able to eliminate malaria in the US by the 1950s. CDC then refocused efforts on surveillance for imported cases of malaria to prevent its re-introduction and providing technical assistance to other countries with endemic malaria.

Each year, more than 400,000 people worldwide die from malaria, primarily in sub-Saharan Africa. However, malaria control efforts are estimated to have averted 1.5 billion cases and 7.6 million deaths since 2000 (WHO, 2020). These successes in malaria control have been driven by many factors, including but not limited to surveillance, vector (mosquito) control measures, quick and accurate diagnosis through rapid diagnostic tests, and treatment of Plasmodium falciparum malaria infection using a combination of drugs, including the WHO recommended artemisinin-based combination therapies (ACTs). Antimalaria drug resistance and insecticide resistance (WHO threat map) is a constantly evolving threat to malaria control programs. Development of resistance to inexpensive treatment drugs such as chloroquine in the 1950s and 1960s and sulphadoxine-pyrimethamine in the 1970s led to the reversal of decades worth of gains achieved by malaria control programs.

Assessing the efficacy of ACTs as the primary treatment for uncomplicated P. falciparum malaria is a top global public health priority. The WHO recommends that countries conduct periodic therapeutic efficacy studies (TES) of ACTs by assessing its efficacy and identifying any signs of ACT resistance. Through the President’s Malaria Initiative (PMI), CDC has supported TES implementation, currently active in 24 countries, in an effort to support data-driven strategies for tracking and mitigating the emergence of potential ACT resistance (Uwimana, 2021). From 2015-2019, the CDC-led, PMI-supported Antimalarial Resistance Monitoring in Africa (PARMA) project analyzed more than 5,000 TES samples and generated critical efficacy and drug-resistance data for 14 countries. The PARMA initiative supports an eight-week program in Atlanta that allows visiting scientists to bring TES samples with them and gain experience generating and analyzing genomic P. falciparum malaria data associated with drug resistance.

Traditional genotyping methods based on Sanger sequencing, used by PARMA during 2015-2019, allowed scientists to capture only the tip of the iceberg, analyzing only a limited subset of the available TES samples and limited to a few sequences per sample. The more robust and sensitive next-generation sequencing (NGS) method, which was used to publish the first malaria parasite genome for Plasmodium falciparum in  2002, with dramatically decreased sequencing costs, since 2014 has become the sequencing method of choice for routine surveillance. CDC also received support from the congressional Advanced Molecular Detection (AMD) initiative in 2014 to improve its genomic and analytical surveillance capacity. That same year, the malaria lab scientists received an intramural innovation grant by the Office of AMD to develop a targeted, genome-based method for molecular surveillance of all known P. falciparum malaria drug resistance markers.  Although NGS-based tools were initially implemented for domestic malaria surveillance, they have more recently been deployed to support PARMA. These tools allow samples to be combined in sequencing runs and generate hundreds to thousands of sequences per sample, providing scientists with the ability to track all known markers of drug resistance—and for the first time, to see more of the iceberg.

Looking to the future, CDC seeks to ensure these sophisticated molecular detection methods are standardized and accessible so that they can be used in the countries that need them most. With artemisinin resistance now showing up in Africa, CDC and PARMA are in the initial stages of developing a PARMA regional hub in Senegal to further the molecular surveillance efforts to help target clinical monitoring faster and closer to the field.