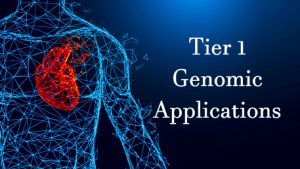 The CDC Tier-Classified Guideline Database includes three Tier 1 guidelines on hypertrophic cardiomyopathy (HCM). A 2014 guideline from the European Society of Cardiology, a 2017 guideline from the American Heart Association, American College of Cardiology, and Heart Rhythm Society, and a 2020 guideline from the American Heart Association and American College of Cardiology all recommend genetic testing for patients meeting diagnostic criteria for HCM. Each includes recommendations for evaluation of family history, cascade genetic testing in relatives, and genetic counseling of affected individuals. Although there are currently no therapies available for primary prevention of HCM, identifying family members at increased genetic risk can help inform broader risk stratification and routine surveillance strategies. In this blog post we review recommendations for cascade genetic testing in HCM for public health.

HCM is an inherited heart disorder which results in abnormal thickening of the heart walls (hypertrophy) that can lead to heart failure (HF), atrial fibrillation, and sudden death due to ventricular arrhythmias. In up to 40% of affected people, HCM is caused by a specific change (mutation) in one of the genes that make up a structure called the cardiac sarcomere, which allows muscle cells to contract. Only one copy of a defective gene is needed to develop HCM (autosomal dominant).

HCM is common, affecting about 1 in 500 individuals (0.2%, or over 660,000 people in the United States). HCM is characterized by incomplete and age-dependent penetrance, with most individuals not developing manifest disease until adulthood. Genetic testing from the Framingham Heart Study and the Jackson Heart Study, 2 large, U.S., population-based epidemiologic studies, have shown that the prevalence of likely disease-causing sarcomere gene mutations may be as high as 0.6% (nearly 2 million individuals in the U.S.), suggesting the lifetime prevalence of HCM is higher than that estimated by clinical imaging.

Sudden death is the most concerning complication of HCM. Among those with HCM, sudden death occurs at an annual incidence of 0.6%, which is approximately 10-fold higher than in population-based cohorts; this would correspond to between 4,000-12,000 deaths every year in the U.S., depending on population prevalence between 0.2-0.6%. It is expected that nearly 1 in 6 patients with HCM will die suddenly. Further, HCM is a common cause of sudden death in children and young adults, a devastating complication reported in many high-profile cases of professional and amateur athletes. Notably, clinical risk stratification in those with HCM can guide the use of life-saving implantable cardioverter-defibrillator therapy.

In addition to sudden death, symptoms of HF occur with a lifetime incidence of ~70% in HCM, and approximately 5% of individuals will develop medically refractory HF that leads to premature death or the need for advanced HF therapies such as heart transplantation or a surgically implanted mechanical heart pump (left ventricular assist device, or LVAD). Finally, atrial fibrillation, a common cause of disabling strokes, occurs at a higher incidence in HCM relative to the general population, particularly in younger individuals. Importantly, stroke risk in HCM is independent of traditional risk stratification tools used for patients with atrial fibrillation. Therefore, early detection is of paramount importance as initiation of anticoagulant therapy to reduce stroke risk is advised for all patients with HCM and atrial fibrillation, a recommendation that differs from individuals without HCM who have atrial fibrillation.

Given the age-dependent penetrance of HCM, the risk of complications is highest in those with clinically evident cardiomyopathy earlier in life, potentially leading to decades of life lost to disability or early mortality. Recent data from the Sarcomeric Human Cardiomyopathy Registry (SHaRe), an international consortium of HCM centers of excellence and the largest cohort study of HCM to date, has shown that those diagnosed with HCM before age 40 have a ~90% lifetime chance of developing a significant HCM-related complication along with a ~30% lifetime chance of sustaining a potentially life-threatening ventricular arrhythmia. By comparison, those diagnosed after age 60 have a ~30% chance of a significant HCM-related complication with a ~1% risk of ventricular arrhythmias. This age-dependent risk is directly correlated with the presence of a sarcomere gene mutation.

These findings highlight the large and potentially preventable burden of death and disability associated with HCM, particularly in sarcomere gene mutation-positive individuals. Consequently, the guidelines mentioned above recommend genetic testing for those with HCM to confirm the diagnosis and facilitate cascade genetic testing for their family members if a likely causative mutation is identified. The expanding list of tier 1 genomic applications in clinical practice points to the growing importance of genomics as a public health tool for identifying at-risk individuals, accelerating care to impact preventable events, and improving population health.

One comment on “An Expanding List of Tier 1 Genomic Applications: Evidence-based Guidelines for Hypertrophic Cardiomyopathy and Public Health”