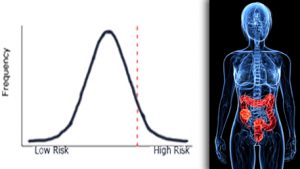 Polygenic risk scores (PRS) summarize information about a person’s disease risk based on numerous DNA variants in their genome. Each variant confers very little increase in disease risk. But composite (or polygenic) risk scores made up of a number of such variants have been shown to stratify people to normal distributions of disease risks for a wide range of diseases. In other words, they can be used to assign people to different categories of risk, based on their genetic makeup. Polygenic risk scores have been proposed to stratify risk in cancer screening programs such as breast cancer and colorectal cancer. But what is the emerging evidence for benefits, harms and costs of using PRS in cancer screening?

In this post, we highlight a recent publication on the “Cost-effectiveness of risk-stratified colorectal cancer screening based on polygenic risk –.” The paper arose from collaborative work between members of groups supported by the Centers for Disease Control and Prevention (CDC) and the National Cancer Institute (NCI), namely the Evaluation of Genomic Applications in Practice and Prevention Working Group (EGAPP), and the Cancer Intervention and Surveillance Modeling Network (CISNET). EGAPP was an initiative supported by the CDC Office of Genomics and Precision Public Health (OGPPH) to develop methods for creating evidence-based guidelines in genomic medicine. Products of the initiative included systematic reviews, as well as method reports and recommendations. While topics addressed by EGAPP spanned a broad range of health conditions, cancer-related topics were featured highly, and recommendations on genetic testing in the context of breast cancer, prostate cancer, and colorectal cancer (CRC; two recommendation statements) were published.

CISNET is comprised of NCI-sponsored researchers involved in simulation modeling to help inform cancer research prioritization and guide policymaking. CISNET collaborates regularly with a variety of noteworthy organizations, including the CDC Division of Cancer Prevention and Control (DCPC), and the U.S. Preventive Services Task Force (USPSTF). Members of the CISNET consortium have collaborated with EGAPP Initiative and Working Group members on projects such as this most recent paper, a 2015 systematic review on family history in CRC, and a 2018 report on cost-effectiveness of screening intervals among those with family history of CRC.

At the heart of the CISNET-EGAPP collaborative work has been the MISCAN simulation model, developed in a collaboration between researchers at Erasmus Medical Center and Memorial Sloan-Kettering Cancer Center. The model simulates progression of CRC in the US population (from 1970s – 2020), accounting for variations in screening, therapy, and exposure to specific risk factors. In the most recent paper, MISCAN-Colon simulated a population of 40 year old people who were at average risk for CRC. This hypothetical population was tested for multiple genetic variants and subsequent CRC screening start dates and intervals based on risk stratification according to their predicted polygenic risk. The results showed that this type of approach is not likely to be cost-effective in comparison with uniform screening (screening by colonoscopy every ten years, beginning at age 50, until age 70). The cost profile for polygenic risk stratified screening could change, however, if the cost of the genetic testing component went down by more than 5%, or if the performance of genetic testing was better (or more accurate, as reflected by an increase in the area under the receiver operating characteristic curve of more than 0.05).

The results of this study suggest that CRC screening based on polygenic risk prediction is not ready for widespread implementation. The findings are in agreement with the 2015 systematic review, mentioned above, which concluded that “[s]tratification based on polygenic and/or multifactorial risk assessment may mature to the point of displacing family history-based approaches, but for the foreseeable future, family history may remain a valuable clinical tool for identifying individuals at increased risk for CRC.” The 2018 microsimulation study sheds more light on family history-based approaches, concluding, “for individuals with a family history of CRC, it is cost-effective to gradually increase the screening interval if several subsequent screening colonoscopies have negative results and no new cases of CRC are found in family members.”

As we wait to see if polygenic risk prediction will evolve into a useful adjunct in CRC prevention, it is important to remember that there already are evidence-based guidelines available for CRC screening. While certain factors, such as having familial adenomatous polyposis (FAP), or Lynch syndrome, or a family history of CRC, may necessitate earlier initial screening, USPSTF recommendations call for regular CRC screening, starting at 50 years of age and extending up to at least 75 years old (and sometimes beyond) to prevent CRC.