Can a Healthy Lifestyle Reduce Your Risk of Dementia Regardless of Your Genes? 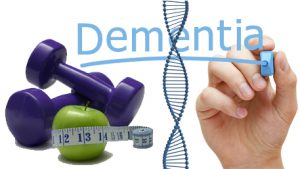 A large retrospective, cohort study found that a healthy lifestyle is associated with a lower risk for dementia among people considered at high genetic risk.

An active lifestyle, which includes a nutritious diet, limited alcohol, and not smoking, has long been associated with reduced risk of cancer and heart disease. In the last ten years, research has increasingly provided evidence that there is also a link between a healthy lifestyle and a reduced risk for developing dementia.

In recent years, much focus has been placed on the role of the APOE 4 allele as a risk factor for Alzheimer’s disease. Furthermore, while a few genetic mutations, such as those in the amyloid precursor protein and presenilin-2 genes, have been found to be associated with early-onset Alzheimer’s disease, most cases of dementia occur in older adults in whom no definitive genetic risk has been identified. Polygenic risk scores, which combine multiple risk alleles, have been associated with all-cause dementia and can provide a quantitative, but incomplete, measure of dementia risk. While this research is important, currently there are no recommended genetic tests for predicting dementia and Alzheimer’s disease and no measures to definitively prevent Alzheimer’s disease have been identified.

In July 2019, a study was published in JAMA examining the association between genetic risk status, healthy lifestyle status, and incidence of dementia which included 196,383 adults of European ancestry who were 60 years of age or older. The participants were members of the UK Biobank without dementia at baseline and were followed for up to ten years. A polygenic risk score for dementia was calculated for each participant as well as a weighted healthy lifestyle score which included smoking status, diet, physical activity, and alcohol consumption. All-cause dementia was then determined through hospital inpatient and death records.

The results showed that a healthy lifestyle was associated with a lower risk of dementia regardless of a person’s genetic risk. The study has a number of limitations including that lifestyle factors were self-reported, some cases of dementia were not reported in available medical or death records, and the sample was restricted to a population of white adults with European ancestry. Additionally, because the average age of research participants was 72 years at the end of study follow-up, it is not clear if a favorable lifestyle can prevent Alzheimer’s disease or simply delay its onset until older age.

There is still much to learn about the link between lifestyle choices and brain health over time. However, dementia is not a part of healthy aging. CDC promotes tips for healthy living as we age, which include lifestyle choices but also knowing and acting upon one’s family health history and discussing changes in memory or an increase in confusion with your doctor. The results of this study may illustrate yet another example for which genes do not equal health destiny. In other words, while your genome and family history may place you at higher risk for certain diseases there is evidence that you may be able to lower that risk by living a healthy lifestyle.