Universal Screening for Lynch Syndrome: Can Tumor Sequencing Have a Larger Public Health Impact on Treatment and Prevention of Colorectal Cancer? 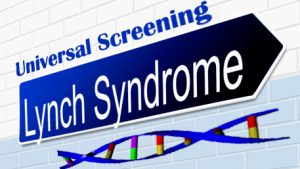 Lynch syndrome (LS) is the most common hereditary syndrome associated with increased risk of colorectal cancer (CRC), accounting for about 3% of CRC patients. LS is a dominantly inherited condition with mutations in several mismatch repair (MMR) genes. Persons with LS are also at increased risk for endometrial and other cancers. Lynch syndrome affects 1 out of every 280 people, and most people with LS are unaware of their increased cancer risk until diagnosed with colorectal or other cancers. Many of those diagnoses occur before age 50 years, the recommended age for colorectal cancer screening in the United States.

In 2009, the independent Evaluation of Genomic Applications in Practice and Prevention (EGAPP) working group recommended identifying LS in all newly diagnosed CRC patients, with cascade testing to their at-risk first-degree relatives. Diagnosed individuals with LS can benefit from enhanced cancer surveillance, chemoprevention and risk reducing surgery. The EGAPP recommendation came a few years before other professional organizations and evidence groups made similar recommendations. Universal screening for Lynch syndrome is a CDC Tier 1 genomic application and has the potential to identify thousands of new Lynch syndrome cases every year.

Transforming EGAPP recommendations into reality has been slow. Universal screening for Lynch syndrome has not been fully realized. Part of the challenge resides in the complex sequential testing protocol involving up to six steps of combined biochemical and genetic markers. These are complex and confusing to patients and clinicians and occur over a prolonged period, incurring risk for loss to follow up. The EGAPP working group did not have sufficient data to recommend a specific test.

In the past few years, multiple health care and public health efforts and collaborations have increased uptake of universal screening for LS among newly diagnosed CRC patients. These include, among others, the Lynch Syndrome Screening Network, statewide screening initiative in Ohio, CDC state cooperative agreements in cancer genetics, the Genomics and Population Health Action Collaborative, and more recently the Cancer Moonshot initiative.

In the meantime, new genomic research could be changing clinical and public health approaches to reducing the burden of colorectal cancer from LS and in general, by shifting the laboratory testing approach toward tumor next generation sequencing.

The recent study has some potential limitations as discussed by the authors and will require further validation. Nevertheless, if confirmed, it strongly suggests that tumor sequencing may be a better alternative to current laboratory practice not only in finding patients with LS but also in making a bigger public health impact on treatment and prevention of colorectal cancer beyond Lynch syndrome.