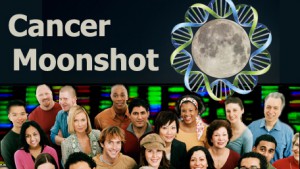 In September 2016, the Cancer Moonshot Blue Ribbon Panel delivered a report with 10 ambitious recommendations to shape cancer research for the next five years. One recommendation is to “expand use of proven prevention and early detection strategies.” [PDF 199 KB] There is a lot we can do to prevent cancer now— even with no new scientific breakthroughs. From tobacco control, to colorectal cancer screening and HPV vaccination, we need to develop and use best evidence to make sure more people are reached by these strategies. Embedded in this overarching recommendation is a call for “increasing testing for hereditary cancer syndromes [PDF 199 KB] in people with certain types of cancer and their family members, so those identified as high risk can begin early prevention or screening efforts.”

In the past few years, CDC has focused on two of these hereditary cancers with proven strategies to reduce morbidity and mortality: hereditary breast and ovarian cancer (HBOC) and Lynch syndrome (LS). Earlier this year, CDC hosted a public health grand rounds focused on these conditions that featured public health efforts such as surveillance, education and policy developments to boost the identification of affected individuals and reduce morbidity and mortality. About 1 in every 500 women in the U.S. are estimated to carry a mutation in either BRCA1 or BRCA2 genes that puts them at markedly increased risk of breast or ovarian cancer. The United States Preventive Services Taskforce (USPSTF) recommends that primary care providers screen women to identify a family history that may indicate HBOC. Women with a family history consistent with HBOC should be referred to genetic counseling, and if appropriate, should receive genetic testing for this syndrome. Several interventions are available to reduce the risk of developing cancer including earlier screening, chemoprevention and risk-reducing surgery.

LS involves mutations in DNA mismatch repair genes with markedly increased risk for colorectal cancer. Each year, LS accounts for 1-3% of all colorectal cancer cases. The Evaluation of Genomic Applications in Practice and Prevention (EGAPP) Working Group recommends that patients newly diagnosed with colorectal cancer be offered genetic testing for LS to reduce morbidity and mortality in their close relatives. Individuals with LS can start screening for colorectal cancer at younger ages, and screen more frequently than average-risk individuals.

Both HBOC and LS are relatively common in the U.S., with more than a million affected people. But most affected people do not know they have it. To date, implementation of evidence-based recommendations is widely variable with marked disparities by race/ethnicity. In order to increase uptake of evidence-based interventions to achieve impact at the population level, an implementation science agenda will involve collaboration among health systems, public health programs, patient advocacy organizations, professional organizations and others.

Implementation of the Cancer Moonshot recommendations for increased testing for people with hereditary cancers will explore the various ways to achieve maximum public health benefits. More broadly, a public health success for HBOC and LS could serve as a model for genetic testing for conditions that expand beyond cancer, most notably familial hypercholesterolemia (FH), a common genetic disorder associated with premature heart attacks and which, like HBOC and LS, is poorly diagnosed and managed by the health care system.

Could there be new population-based approaches to find persons with HBOC, LS and FH? In the past few years we have seen a dramatic expansion of whole exome sequencing and whole genome sequencing for both clinical and research purposes. Clinically, the most common indication is the diagnostic workup of rare diseases. In the research realm, implementation of the precision medicine cohort initiative and other ongoing efforts will lead to genome sequencing for millions of people in the next few years. Results of genome sequencing could uncover mutations in the genes associated with HBOC, LS, FH and a few others (total of 56 genes) that the American College of Medical Genetics and Genomics [PDF 342 KB] have deemed to be “clinically actionable” and recommended that they be returned to tested individuals undergoing testing. More than 1% of the population carries mutations in one of these genes. Many affected individuals do not have the prerequisite family history that would trigger genetic counseling and testing for these conditions. Returning results of “incidental” findings allows a form of “opportunistic” screening and can provide a research platform to assess screening process and clinical outcomes in tested people, and evaluate health system factors that would affect implementation. While regular population screening for hereditary cancers is not ready for implementation, research based on opportunistic screening could be used to answer many questions that can build a scientific case for population screening in the future.

In a 2013 commentary, Dr. James Evans from the University of North Carolina at Chapel Hill (UNC) argued for careful study of adult genetic screening for selected conditions using “a new partnership between the genomics and public health communities.” The partnership would expand the focus from solely common diseases and embrace the newly developed power of genomics to identify those individuals in the population who carry mutations that place them at risk of preventable diseases. The UNC team is currently conducting a pilot project (“GeneScreen”) of population genetic testing that will lead to new information on the benefits, harms and costs of population genetic screening of adults. More collaboration among groups can provide information about whether population screening is worth implementing.

Adult genetic screening in healthy people in the absence of family history needs to be carefully studied for potential benefits, harms, costs and implementation strategies. If a scientific case can be made, the payoff will be saving more lives and preventing premature deaths from hereditary cancers, heart disease and other conditions than the current recommended evidence-based approaches. We need a scientific road map to study population genetic screening of adults. After all, “we screen newborns, don’t we?”