Medications for the Masses? Pharmacogenomics is an Important Public Health Issue 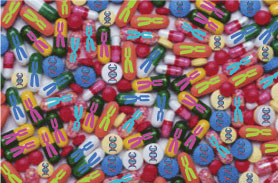 How can genomics help? Pharmacogenomics is the study of genetic variation as a factor in drug response, affecting both safety and effectiveness. The intended applications of pharmacogenomics research include identifying responders and non-responders to medications, avoiding adverse events, optimizing drug dose and avoiding unnecessary healthcare costs.  The Food and Drug Administration has added pharmacogenomic information to the labeling for more than 70 drugs. Labels may include information on genetic determinants of clinical response or risk for adverse events.

In spite of current enthusiasm about pharmacogenomics in the research community, very few pharmacogenomic tests have been evaluated for use in clinical practice at this time. Although considerable information is accumulating on the relationship between genetic variation and drug metabolism and adverse effects, precious little evidence exists for their added value in clinical practice.

One pharmacogenomic test that is recommended for use is a test for HLA-B*5701 to identify people at risk for an adverse effect of HIV treatment with abacavir. An open access journal, PLoS Currents Evidence on Genomic Tests, recently summarized evidence supporting the use of this test, excerpted here:

“There are approximately 33 million people worldwide who are living with HIV/AIDS. Among them are approximately 1.2 million Americans, with an estimated 56,300 newly diagnosed infections each year. Combination antiretroviral therapy is the most effective pharmacotherapy for HIV treatment. One of these drugs is abacavir. Abacavir hypersensitivity reaction affects 5 to 8% of patients and can be observed during the first 6 weeks of antiretroviral therapy.  Symptoms of an abacavir hypersensitivity reaction include skin rash, fever, malaise, gastrointestinal symptoms, and respiratory symptoms.  Rarely more severe forms of disease can occur.  If a patient experiences a hypersensitivity reaction, abacavir is discontinued and symptoms generally resolve within 72 hours. Restarting abacavir is contraindicated as it can result in a potentially life-threatening reaction and even death.  The HLA-B*5701  pharmacogenomic test minimizes potential toxicities to abacavir by identifying patients who may be at risk of developing a hypersensitivity reaction. Testing for HLA-B*5701 prior to initiation of abacavir has been recommended by the U.S. Department of Health and Human Services  (DHHS) Panel on Antiretroviral Guidelines for Adults and Adolescents”.

Many other pharmacogenomic tests that are subjects of active research and debate–such as pharmacogenomic testing to guide warfarin dosing–have the potential for public health impact. For most of these tests, however, there is simply not enough evidence to warrant their use in practice at this time.

Public health has an important role in providing unbiased information to pharmacists, practitioners and policy makers about the value of these tests. One such effort funded by the CDC Office of Public Health Genomics is the pharmacogenomics education program conducted by the University of California at San Diego. The program seeks to provide continuing education courses and materials for pharmacists and health care providers to apply pharmacogenomic principles in practice.

Another crucial public health function is to continuously collect information, through surveys and surveillance systems on patterns of use of pharmacogenomic tests in practice to evaluate how these tests are affecting the health of the population.

The promise of pharmacogenomic tests for improving public health is great in the long run. But we should not take shortcuts in using them prematurely without the necessary scientific evidence that shows their added value in terms of improved health outcomes and reduced healthcare costs.

3 comments on “Medications for the Masses? Pharmacogenomics is an Important Public Health Issue”

research on warfarin dosing–definitely will have the potential for public health impact.

Understanding the role that an individual’s genetic make-up plays in how well
a medicine works is very important both to avoid adverse drug reactions and determining dosage.
There are ethical issues.
Personalised medicine is likely to be very expensive and may adversely impact on equity and access to drugs. This may mean that the development of drugs will be targeted to those that work well with certain population groups; any such
targeting will need to be carefully implemented to avoid a perception of stigma based on ethnicity
The assumption that an individual’s race can indicate their genetic profile for drug response is itself problematic since not all people who belong to a particular ethnic group will have the same genetic variations.

Pharmacogenomic Testing is a genetic test that provides feedback and precise data on how certain medicines are processed in an individuals bodies. This type of testing can help a healthcare provider to choose medications that will be most effective in conjunction with an individuals genetic makeup (National Human Genome Research Institute). Currently the FDA, in addition to many healthcare companies, is supporting Pharmacogenomic testing due to the increased cost savings in patient care by reducing the “trial and error” model of medicine that has been utilized to pair psychotherapy patients with appropriate medications for decades. Not only is the cost savings to patients and healthcare companies a positive impact resulting from pharmacogenomic testing, patient care is considerably improving according to health care professionals (Matthews-Hayes).