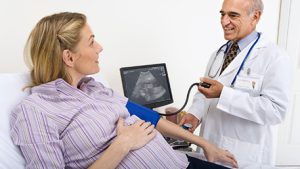 A recent study identified a cell free RNA (cfRNA) signature that was promising in predicting pre-eclampsia several weeks before the onset of symptoms.

At 29 weeks pregnant, Erica was diagnosed with preeclampsia, a pregnancy complication marked by high blood pressure and signs of organ failure, most often liver or kidney damage. According to the Mayo Clinic, preeclampsia usually starts after 20 weeks of pregnancy. Though rarer, preeclampsia may also develop during the post-partum period. It can lead to seizure, stroke, preterm birth, or even death in the mother and/or baby. Due to Erica’s preeclampsia symptoms, she did not carry her baby full-term. She delivered her baby during her 30th week of pregnancy. Though her baby did not have any major complications, her preeclampsia remained post-partum.

Preeclampsia is estimated to occur in 5 to 7 percent of all pregnancies and is one of the leading causes of maternal morbidity. Annually, preeclampsia is responsible for over 70,000 maternal deaths and 500,000 fetal deaths worldwide. In the United States, the rate of preeclampsia in Black women is 60 percent higher than in White women. Not only are Black women more likely to develop preeclampsia, but they are more likely to experience poorer outcomes associated with the condition, such as kidney damage and death.

Risk factors for preeclampsia include first pregnancy; history of preeclampsia; history of hypertension, chronic kidney disease, or both; history of thrombophilia (a condition that increases risk of blood clots); pregnancy from in vitro fertilization; family history of preeclampsia: type 1 or type 2 diabetes; or body mass index (BMI) ) ≥ 35 kg/m2; advanced maternal age (≥ 40 years), and prolonged interval since last pregnancy. Studies have shown that genetic factors are associated with pregnancy complications, such as preeclampsia. Unfortunately, based on data from Public Health Genomics and Precision Health Knowledge Base, there have been only two genome-wide association studies (GWAS) on preeclampsia, which is in stark contrast to its public health importance.

Currently, no recommended tests can predict the future onset of preeclampsia early in pregnancy. The standard of care for preeclampsia is to treat the pregnant woman once a complication has been diagnosed, which proves both insufficient and costly. Rasmussen and colleagues identified a cell free RNA (cfRNA) signature that predicted pre-eclampsia several weeks before the onset of symptoms, with a positive predictive value of 32% and 75% sensitivity. They showed that cfRNA signature is an alternative pregnancy dating procedure for women who start prenatal care later in pregnancy, and as accurate as an ultrasound. Their findings show that maternal age, BMI, and race had a very small impact on pregnancy cfRNA profiles [accounting for less than 1% of gestational age (length of pregnancy) variance]. Hence, their method can be used to assess maternal risk for preeclampsia independently of maternal age, BMI, and race, which are all factors related to bias.

A study done by Moufarrej and colleagues used 404 blood samples from 199 pregnant women mothers to identify and validate cfRNA transcriptomic changes that are associated with preeclampsia. Pregnant women were recruited at their first clinical visit to Stanford’s Lucile Packard Children’s Hospital. The study aimed to build a classifier that could identify pregnant women at risk of preeclampsia at or before 16 weeks of pregnancy. They found that increasing the number of genes included for genetic model training improved the performance of the classifier (including sensitivity, specificity, and the area under the receiver operating characteristic curve).

Additionally, they found a decreased signal in hepatocyte, kidney, endothelial cell, and smooth muscle signatures across pregnancy development, and an increased platelet signal before 12 weeks of pregnancy for preeclampsia, which is consistent with common preeclampsia pathogenesis and with the specific diagnoses. Moufarrej and colleagues suggested that a series of clinical tests can be used to help to identify and stratify the pathogenesis of preeclampsia in real time, thus meeting important objectives for obstetric care, such as characterizing and stratifying the development of preeclampsia in real time. Race, ethnicity, and no previous child birth differed across cohorts but not between case groups. Of note, out of 199 study participants, only 5 participants were African American.  As such, the results of this study are not generalizable to the United States population. Nonetheless, the study shows the need for more genetic studies that help develop tests to predict and manage people at risk for preeclampsia.

As stated earlier, the number of GWAS on preeclampsia that exist is in stark contrast to its public health importance. More studies need to be done on preeclampsia and genetics. We wonder if Erica would have had the same pregnancy complications from preeclampsia if a universal screening test for predicting preeclampsia in early stages of pregnancy existed.

This blog is meant to inform the community of studies that have been done and future work that needs to be done on preeclampsia and genetics. Please visit the Public Health Genomics and Precision Health Knowledge Base for ongoing progress on preeclampsia and genomics. Talk with your doctor if you are planning to become pregnant. If you are already pregnant, get early and regular prenatal care; talk with your doctor about any medicines you take and which ones are safe; keep track of your blood pressure at home with a home blood pressure monitor; and learn the early (urgent) warning signs for preeclampsia. After giving birth, pay attention to how you feel, and tell your doctor or call 9-1-1 right away if you have symptoms of preeclampsia after delivery.