From Polygenic Risk Scores to Methylation Risk Scores: What are the Clinical Applications? 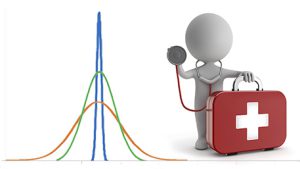 A recent study used methylation risk scores to improve predictive value of baseline models for a range of clinical diagnoses and laboratory tests.

The ability to understand and predict a person’s risk of disease is an integral component of precision medicine and precision public health. Many factors, including environmental and genetic, contribute to a person’s risk of developing common diseases. One way to use genetics to gain a better understanding of this risk is through polygenic risk scores (PRS), which is an estimation of a person’s overall genetic risk for a certain disease. There may be thousands of different genes that each have a small impact on a person’s risk for disease. PRS sums the variation of these different genes, weighted by their effect size, to create a model for an individual’s risk of disease.

This concept has spread to epigenetics, particularly DNA methylation, to create methylation risk scores (MRS). Epigenetics involves the alteration of gene expression without changing the genetic code through processes such as DNA methylation and histone modification. The concept of MRS is similar to that of PRS, but instead of genetic variants, it considers the methylation status at multiple genome locations. However, unlike the genetic variants used for PRS, epigenetic markers for MRS change throughout life and are influenced by both genetic and environmental factors. This may be an advantage since the MRS may be able to incorporate both genetic factors and environmental exposures and their variation over time.

There are still many unknowns about the ability of DNA methylation to aid in lifetime or long-term risk prediction. For example, in the recent study that used MRS in addition to electronic health records (EHR) to predict clinical phenotypes, the methylation was measured after clinical diagnosis. As a result, it is not known whether methylation changes preceded the diagnosis or if the change was a consequence of disease development. Another unknown is the duration of predictive methylation at CpG sites. Methylation that may be predictive or alter the risk for a certain outcome may only be present for a certain window of time. If the measurements for MRS are taken outside of this window, the accuracy of the MRS may decrease. Because of these unknowns and the fluidity of DNA methylation, MRS may be more useful for contributing predictive value to baseline models in assessing current risk.

Cancer is also a promising field where MRS may have potential for risk prediction. Epigenetics has an important role in cancer pathogenesis and subtype diagnosis. Some cancer subtypes have unique methylation profiles that could be used in classification. In 2020, a study used MRS to predict the prognosis of colorectal cancer patients. Combining MRS with other clinical information was found to have a better predictive value for tumor prognosis. Methylation has also been investigated for its potential to predict cancer grade for prostate cancer and to predict bladder cancer diagnosis.

Better understanding of a person’s risk for disease is important for prevention and treatment. Considering a person’s unique set of environmental and genetic risk factors is crucial for this understanding. MRS is in a unique position to combine these genetic and environmental factors over time.  More research will be needed to assess the validity and utility of MRS for risk prediction alongside PRS and environmental models. This may improve public health’s ability to prevent disease in the population.

The connection of EHR and genetic data is an important advancement for genetic epidemiology. Genetic data can be incorporated with EHR to help predict lifetime risk through PRS and current risk through MRS of phenotypes. Increased understanding of risk may provide new ways for precision public health and precision medicine to prevent and treat disease in the population.