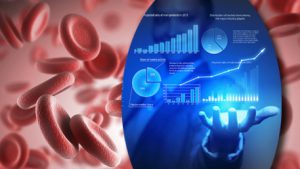 In collaboration with the CDC Office of Advanced Molecular Detection, the Office of Genomics and Precision Public Health recently funded the National Center on Birth Defects and Developmental Disabilities (NCBDDD) to strengthen public health capacity by introducing elements of human genomics into applied research on predicting inhibitor risk in people with hemophilia.

Hemophilia refers to a group of inherited bleeding disorders in which the blood does not clot properly because of a deficiency or dysfunction in one of two clotting factor proteins, factor VIII (8) or factor IX (9).  Along with other clotting factors and platelets, both factor VIII and factor IX are necessary to help the body stop bleeding when an injury occurs. An estimated 33,000 males in the United States are living with hemophilia. Many females are also known to be living with hemophilia, although many others are likely not identified.  The condition tends to be less severe in females because of the way that hemophilia is inherited.

Investigators in NCBDDD’s Division of Blood Disorders will be building on previous research to develop tools to identify people with hemophilia who are most likely to develop inhibitors.

Several regions throughout the human genome have been identified as potentially playing a role in inhibitor development, including the genetic variant in the clotting factor gene that causes a person’s hemophilia, the human leukocyte antigen (HLA) region, and other genes known to be important in the body’s immune response (e.g., IL-10, TNFA, IL1A, IL12B, and CD80).  Investigators in the Division of Blood Disorders have used this information to develop a genetic inhibitor risk prediction tool (pages 537-538 in the linked document) that is based on information about the genetic variant causing a person’s hemophilia, genetic variation in the HLA region of a person’s genome, and genetic variation in a person’s immune response genes.  However, this tool has thus far been evaluated in a relatively small number of people with hemophilia.