Using Immunogenetics in the Fight Against Ebola Virus Disease 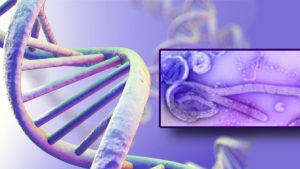 CDC’s Viral Special Pathogens Branch focuses on viruses causing hemorrhagic fevers and requiring the highest levels of biological containment. Within VSPB, the Molecular Pathogenesis and Therapeutics Team conducts basic and applied research to understand how these viruses interact with our bodies to cause disease, and how this knowledge can be used to develop and evaluate new antiviral drugs and vaccines. Among the viruses that we study, Ebola remains a key focus because it continues to spill over from animal hosts to people, regularly sparking outbreaks where the virus spreads between people, killing many of those infected. Since 2018, six Ebola outbreaks have sparked in the Democratic Republic of Congo and Guinea, causing 3,700 illnesses and nearly 2,400 deaths. As VSPB was doing some immunological experiments with the Ebola virus, we came across a curious finding that led to the idea for a new pilot project as part of the recently launched CDC human genomics and public health initiative. But first, here is some context:

Immunity against viruses (and bacteria) has two principal components: innate and adaptive. As the name implies, innate immunity is something people are born with and the first line of defense they have when encountering a new virus. Innate immunity consists of cells and molecules that offer a level of protection against a variety of viruses by recognizing structures these viruses have in common. Adaptive immunity, on the other hand, can learn to recognize and remember the exact invading virus and in doing so, become a strong protective force to stop it from causing disease. It achieves this by training immune cells to identify other cells that have been infected, and by producing and refining antibodies – proteins that bind and block the virus, so it doesn’t infect more cells. As is often the case in biology, different concepts and systems intertwine. Innate immunity sets adaptive immunity in motion; antibodies of the adaptive immunity mark targets for the innate immunity to eliminate; and some antibodies perform housekeeping functions without any real adaptation by clearing out ordinary cell debris.

VSPB staff were intrigued when experiments showed that blood samples from some people who had not been vaccinated against Ebola or infected by it were able to interfere with the virus in ways that we would only expect from samples from vaccinees or survivors of Ebola. With the human genomics project VSPB is launching, we hope to understand how this happens. This could be due to antibodies that were made against some other immunogen but cross-reacted with Ebola virus, by innate immunity proteins in their blood, or both. Then, once we understand the mechanism, we will determine if it can be harnessed to develop new therapies against Ebola virus disease. One thing that’s not clear is why only some people have this trait, while others do not. Through the new CDC Human Genomics and Public Health Initiative’s support, we will expand from sequencing small viral genomes to sequencing sections of the much larger human genome, the genes involved in this mechanism.

Viruses and people interact in many ways and sometimes those interactions cause us harm. It is becoming clear that individual genomic variation plays a role in this, but our current understanding remains patchy at best. When combined with the right virological experiments, human genomic studies have the potential to show us the precise mechanisms involved in such interactions. Those mechanisms can perhaps be targeted by novel therapeutics, and the genomic cues involved hold promise for tailored clinical care to help improve patient outcomes and prevent further infections.