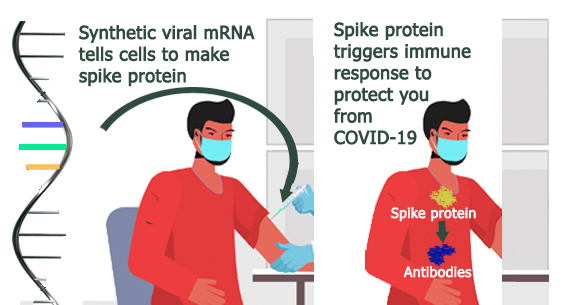 In December 2020, less than a year after the SARS-CoV-2 virus was identified, two COVID-19 vaccines manufactured by Pfizer-BioNTech and Moderna were approved for use in the United States under an Emergency Use Authorization by the U.S. Food and Drug Administration (FDA). Never has a U.S. vaccine been developed so quickly, and genome technology made it possible.

Both vaccines use laboratory-produced messenger RNA (mRNA) as the active ingredient. mRNA contains the chemical instructions that ribosomes, the protein-making machinery in cells, use to make proteins. Vaccine mRNA is non-infectious and is broken down quickly in the body. It does not become part of the cell or affect a person’s genes or DNA.

Using the genetic code of the SARS-CoV-2 virus, vaccine manufacturers developed mRNA that instructs ribosomes to produce the spike protein of the SARS-CoV-2 virus. The spike protein acts as the antigen that the immune system recognizes as a foreign “invader,” prompting a safe and protective immune response. This response can cause mild side effects, which most commonly include pain, redness, or swelling at the vaccination site, and fever, chills, tiredness, or headache. These side effects are normal signs that the immune system is responding to the vaccine, thus the vaccine is working as intended. Each vaccine is approved as a 2 dose series; the Pfizer vaccine was shown to be 95% efficacious in Phase III clinical trials and the Moderna vaccine, 94.1%.

Traditional vaccines against viruses contain portions of the virus that have been altered in some way so they cannot cause infection. Some contain live virus that has been weakened or attenuated; some contain inactivated or killed virus. Some contain only a portion of the virus that is insufficient to cause disease. While these vaccines effectively provoke an immune response and confer protection, developing and manufacturing them is time-consuming, labor-intensive, and expensive. Traditional vaccines often take years to develop and produce, which is not practical in emergency situations like the current COVID-19 pandemic.

In comparison, mRNA vaccines can be more quickly generated in the laboratory using the genetic sequences for selected pathogen proteins. The mRNA vaccine manufacturing process is more easily scaled up to produce large volumes of vaccine. And mRNA technology is more quickly adaptable should there ever be a need to reformulate a vaccine against virus variants that could develop.

First proposed in 1989, mRNA vaccines have been studied for years, with several ongoing clinical trials using mRNA vaccines for cancer and viral diseases, including rabies, influenza, and Zika. They are also being studied for use as possible treatments for chronic diseases, heart failure, and cystic fibrosis.

For vaccine mRNA to deliver the instructions for making the spike protein, it needs to be able to enter the cells so that the protein-making machinery can access it. In the case of the current COVID-19 mRNA vaccines, this is accomplished by packaging the mRNA into lipid nanoparticles (LNP), which temporarily protect the mRNA from breaking down. LNP include lipids, phospholipids, cholesterol and polyethylene glycol (PEG), which increases LNP stability. Though the cause is not yet known, recent reports indicate that in rare cases COVID-19 recipients have experienced anaphylaxis. For this reason, CDC recommends that people who have had a severe or immediate reaction to the vaccine, any ingredient in the vaccine, or to polysorbate (which is closely  related to PEG) not receive the mRNA vaccines. Additional information about precautions and contraindications for vaccination with mRNA vaccine is available at: https://www.cdc.gov/vaccines/covid-19/info-by-product/clinical-considerations.html

An emerging concern is the possible impact of new SARS-CoV-2 variants (for example, the variants first identified in the United Kingdom, South Africa, and Brazil) on mRNA vaccine effectiveness. Scientists are working to learn more about these variants; to better understand how easily they might be transmitted and how effective the current vaccines are against them. New information about the epidemiologic and clinical characteristics of these variants is emerging rapidly. It remains unclear whether these mutations will seriously reduce vaccine efficacy. It is likely that future formulations of mRNA vaccines will need to be adjusted to accommodate key gene sequence changes present in the new variants.

mRNA vaccines offer new hope for containing the COVID-19 pandemic and represent an incredible achievement in the application of genomic technology in medicine and public health.

The technology allowing quick adaptability in case of need for reformulation against new variants seems a key advantage to prevent transmissions reach an endemic state or seasonality later after ending the pandemic.