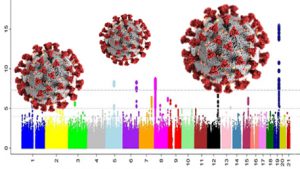 Host genomic studies play an important part in understanding disease susceptibility, severity, and outcomes. These studies require a minimum number of participants to ensure statistical power. Participation barriers and facilitators must be considered in order to effectively recruit a suitable number and diversity of eligible participants.

The COVID-19 host genetics initiative aims to explain the role of host factors in the current pandemic. Studies might need to include populations that are at increased risk for severe illness, such as those with pre-existing medical conditions including obesity, type 2 diabetes, and serious heart disease. In addition, studies on disease incidence and severity in the United States would need to include populations experiencing higher rates of severe illness, such as Black, Hispanic, and Native American people. While the differences in incidence and severity in these groups is not thought to be due to genetics, any genetic studies done should strive to be representative of the larger population. Research studies often provide the most benefit to the populations that are studied, and some of these populations, such as Blacks, Hispanics, and Native Americans, have been historically underrepresented in medical research.

Some findings are particularly relevant to groups experiencing more severe illness from COVID-19. These include

In addition to those for epidemiologic studies, DNA studies have their own considerations. They require participants to submit some form of genetic material, such as saliva or blood, which may raise the participant’s perception of risk. Some additional barriers to DNA study participation include:

Past injustices, such as the Tuskegee Study, are at the root of mistrust among Black, Native American, and other populations that have been historically underrepresented in research. Potential discrimination and fear of being experimented on are valid concerns that contribute to the lack of trust in the scientific community. In order to effectively recruit diverse populations for genetic research, the barriers specific to these populations must first be addressed.

Approaches that address barriers to DNA study participation include:

As an example, The Precision Medicine Initiative’s All of Us Research Program has had some success in recruiting a diverse range of participants by establishing public trust and redefining the patient-researcher relationship through addressing some of the ethical, legal, and social issues that are associated with the research initiative. These efforts have included

Some action items to make studies more inclusive in the future include: