Beyond Tuberculosis: BCG Vaccine and Epigenetics 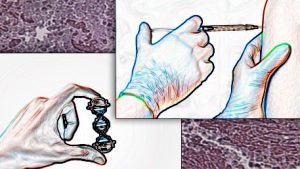 Tuberculosis (TB) infection is spread from person to person by respiratory droplets containing the bacterium Mycobacterium tuberculosis. This infection mainly affects the lungs and may be fatal if left untreated. TB remains a leading cause of death worldwide. In 1921, a live attenuated vaccine, called the BCG vaccine, was introduced to protect against TB. The vaccine provides better effectiveness against childhood TB than against adult pulmonary TB. This vaccine is one of the most used vaccines in the world today, commonly given as part of childhood vaccine programs in developing countries and countries with high TB incidence. The United States, Canada, Australia, and many western European countries do not include the vaccine in general childhood vaccine programs, offering it only to certain high-risk populations. Reasons for this policy in the United States include low TB incidence, varying effectiveness of the vaccine against adult pulmonary TB, and potential for vaccination to cause a false positive TB skin test.

After the vaccine’s introduction, early clinical trials were conducted to measure its effectiveness. Along with TB effectiveness, these studies also reported a decrease in overall mortality. In 2014, the World Health Organization analyzed epidemiological studies— which included randomized clinical trials, as well as cohort and case control studies — that investigated the effect of the BCG vaccine on all-cause mortality. Though many of the studies contained the possibility for high bias, the analysis found that greater decrease in overall mortality than could be attributed solely to decreases in TB. In particular, BCG vaccine appeared to protect against diverse infections from bacteria, parasites, and viruses (e.g., leprosy, malaria, and respiratory syncytial virus). Additional studies further demonstrated BCG vaccine’s protective effects against viral infections, including influenza and herpes simplex virus 2 in mouse models.

How can a live attenuated bacterial vaccine protect against viral infection? One component of this protection may be a long-term enhanced response of the innate immune system to infection, a phenomenon called trained immunity. The innate immune system is one of the body’s first defense systems against pathogens, producing cytokines which are important for eliminating infections. Prior BCG vaccination has been associated with increased cytokine production in response to exposure to multiple non-TB pathogens.

How is the BCG vaccine involved in trained immunity? Trained immunity is mediated through epigenetics, the modification of gene expression without changing the genetic code. Histone modification seems to be the main epigenetic mechanism for BCG-induced trained immunity. DNA wraps around proteins called histones such that some genes can be accessed easily by cell proteins that “read” the gene, increasing gene expression, while others are less accessible, decreasing gene expression. Modifying these histones changes whether a gene is exposed or unexposed and therefore alters gene expression. The BCG vaccine has been shown to increase methylation of one of the histone proteins, resulting in increased cytokine production in certain immune cells. These epigenetic changes and increases in cytokine production have been shown to persist at least three months after vaccination. Epigenetic changes associated with BCG vaccine may be important for “training” immune cells and producing its observed protective effects against infection. However, further study is required to determine how other factors such as age at vaccination affect BCG-induced trained immunity.

The mechanisms of BCG-induced trained immunity and the extent of its protective effects are not yet completely understood. An early observation that countries where the BCG vaccine is frequently used reported lower numbers of COVID-19 cases compared with other countries sparked interest in the hypothesis that BCG vaccine has protective effects against COVID-19. Clinical trials to test this hypothesis are currently in progress in many countries, including the United States, the Netherlands, Egypt, and Australia.

BCG vaccine is not the only vaccine shown to have nonspecific protective effects against infection. Measles vaccine and oral polio vaccine have also been associated with decreased overall childhood mortality beyond the specific diseases the vaccines target. The nonspecific effects of these vaccines raise the possibility of a role for vaccines in enhancing nonspecific immunity to combat and prevent future emerging infections.