The Public Health Impact of COVID-19: Why Host Genomics? 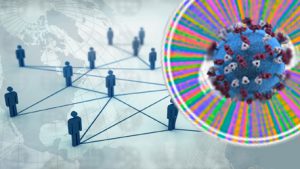 Throughout human history, zoonotic pandemics have periodically resulted in catastrophic human morbidity and mortality exceeding war, famine, and natural disasters combined. Modern era medicine and public health have made remarkable advances, but vulnerabilities have also increased with unprecedented world population growth, greater interaction with wildlife, and the dramatic expansion of international air travel. Viral diseases from animal populations continue to emerge in the 21st century to cause human epidemics, challenging public health systems around the world. These include previous novel coronavirus disease outbreaks of severe acute respiratory syndrome (SARS; 2002-03) and Middle East respiratory syndrome (MERS; 2012), among many others.

A novel coronavirus that emerged in late 2019 has rapidly become a global pandemic, affecting more than 1 million people worldwide as of April 11, 2020. Evidence suggests that host factors such as age, sex and underlying comorbidities play a role in the risk of severe outcomes of COVID-19, including mortality.

In the decade following the SARS outbreak in 2003, several human candidate gene studies of infection susceptibility and severity were conducted. Human genome-wide association studies (GWAS) were proposed as a way to investigate the “super-spreader” phenomenon observed in the SARS and MERS outbreaks. Human genetic factors have also been investigated in avian and swine influenza outbreaks, for example in studies of family clustering of H5N1 and pediatric morbidity following H1N1 infection.

Although priority for such research efforts can taper without a sustained commitment, an integrated approach to “research preparedness” includes actions before, during, and after the event. Advances in technology now make it possible to analyze host genomic factors while an outbreak is underway. The ability to quickly and accurately identify vulnerable and protective host factors could expand the effectiveness of the public health approach to COVID-19.

Genome sequencing technologies that identified the SARS coronavirus in 2003 have evolved rapidly in the past two decades. Chinese scientists were able to sequence COVID-19 and post the results online within two weeks of the first reported cases. Research priorities in the current outbreak include devising rapidly deployable diagnostic tests, better understanding transmission, developing and testing antiviral drugs, and ultimately, developing a protective vaccine.

Both viral and human genomic information may be important for achieving these goals. Finding biological mechanisms for severe infection could inform the development of therapeutics targeting those pathways. Information on human genetic variants associated with susceptibility to severe infection could be useful for prevention within families and healthcare workers or for directing clinical care on hospital admission.

Research publications have suggested the potential for ACE2 genetic variants, interleukin-6, HLA antigens, and blood groups to be risk factors in COVID-19 severity and outcomes. Am emerging global COVID-19 host genetics initiative is bringing together the human genetics community “to generate, share and analyze data to learn the genetic determinants of COVID-19 susceptibility, severity and outcomes. Such discoveries could help to generate hypotheses for drug repurposing, identify individuals at unusually high or low risk, and contribute to global knowledge of the biology of SARS-CoV-2 infection and disease severity.”

Ideally, scientific studies of COVID-19 risk factors for transmission and severity should include both viral and human genomes and the interaction of these two genomes, along with other traditional environmental, social and economic factors, and emerging types of “big data”. Together, such studies could not only accelerate our knowledge base but contribute to a new era of precision public health.

One comment on “The Public Health Impact of COVID-19: Why Host Genomics?”